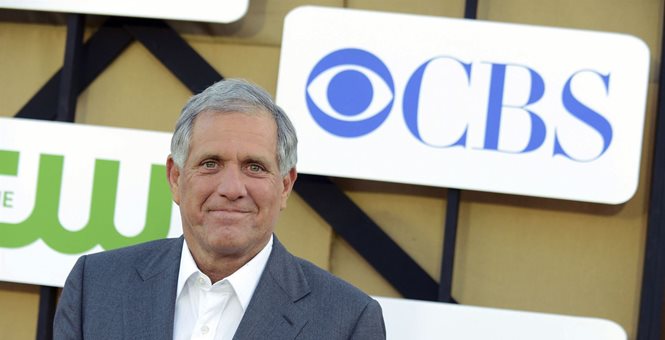 Farrow’s story is long but worth your time so I’ll keep this short to let you get to it, especially since John has already previewed the piece.

Six women are accusing Moonves of misconduct, not all under their own names — but the most harrowing account comes from someone who is, actress Illeana Douglas. If what she says is true, Moonves would deserve to be fired for this incident alone. And there’s reason to believe what she says is true: She’s told the story to multiple friends and colleagues in the 21 years since it allegedly happened, among them Martin Scorsese. What do you do when the most powerful man in television decides he wants to dry-hump you?

As Douglas attempted to turn the focus back to work, Moonves, she said, grabbed her. “In a millisecond, he’s got one arm over me, pinning me,” she said. Moonves was “violently kissing” her, holding her down on the couch with her arms above her head. “What it feels like to have someone hold you down—you can’t breathe, you can’t move,” she said. “The physicality of it was horrendous.” She recalled lying limp and unresponsive beneath him. “You sort of black out,” she told me. “You think, How long is this going to go on? I was just looking at this nice picture of his family and his kids. I couldn’t get him off me.” She said it was only when Moonves, aroused, pulled up her skirt and began to thrust against her that her fear overcame her paralysis. She told herself that she had to do something to stop him. “At that point, you’re a trapped animal,” she told me. “Your life is flashing before your eyes.” Moonves, in what Douglas assumed was an effort to be seductive, paused and asked, “So, what do you think?” Douglas told me, “My decision was to get out of it by joking my way out, so he feels flattered.” Thinking that reminding Moonves that he was her boss might discourage him, she told him, “Yes, for the head of a network you’re some good kisser.” Moonves frowned and got up. She scrambled to find her briefcase. “Well, this has been great. Thanks,” she recalled saying, moving toward the door. “I’ve got to go now.”

Shortly thereafter, she claims, her deal with CBS evaporated, her manager dropped her, and her agent wished her well in all future endeavors. Only after her lawyer phoned CBS and started asking questions was Douglas rehired to work on a miniseries, which she interpreted as a de facto settlement of any potential sexual harassment claim. Another woman, also on the record, claims that after she rejected Moonves’s advances he told her on the phone that “People’s reputations are important. Do you understand?… I’m warning you. I will ruin your career. You will never get a writing job. No one will hire you. Do you understand what I’m saying to you?”

Thirty current and former CBS employees described harassment, gender discrimination, or retaliation at the network. Many said that men accused of misconduct were promoted, even after the company was made aware of those allegations. Their stories match several that have already emerged in public reports. Earlier this year, Leslie Isaacs, a vice-president at Pop, the cable channel jointly operated by CBS and the film studio Lionsgate, filed a lawsuit alleging that CBS was aware of a hostile workplace at the channel. Her complaint described harassment and discrimination by male colleagues, including a vice-president who allegedly instructed female employees to “show your clients your tits.” Isaacs told me, “It wouldn’t be happening at Pop if it wasn’t covered up at CBS, and if CBS wasn’t complicit. They know, and it’s been tolerated.”

CBS News is named by Farrow as being an especially bad actor (a “frat house”), with “60 Minutes” executive producer Jeff Fager singled out as a noxious enabler. It wasn’t just that Fager himself harassed people, Farrow’s sources claim, it was that he protected other men down the chain of command who did so as well. (“Fager seemed to encourage that climate. It wasn’t even that he turned a blind eye toward it.”) Here too there are claims of retaliation, with one woman employee alleging that she complained to Fager about a co-worker’s sexual advances only to suddenly be frozen out of assignments and have her work performance criticized for what she claims were dubious reasons. The bureau-wide culture of harassment that Farrow describes reminds me of bribe-talking in old-school police departments. Each individual malefactor may have different reasons for doing what he does — some want to, others do it to be part of “the team,” others may feel pressured to participate because their doing so will ensure their silence — but there is a discrete culture to it, not just a bunch of random bad guys somehow thrown together by chance. No wonder Charlie Rose allegedly got away with his own shenanigans for years. Moonves sits atop everything. That’s Farrow’s most damning point.

Big trouble ahead for the network. Here’s the link. Exit quotation: “In recent months, Moonves has become a prominent voice in Hollywood’s #MeToo movement. In December, he helped found the Commission on Eliminating Sexual Harassment and Advancing Equality in the Workplace, which is chaired by Anita Hill.” Remember when Weinstein tried to show his own feminist bona fides once the first big exposes about him came out? Farrow’s story about Moonves has been in the works for months. Maybe the CBS honcho got wind of it early and moved to make friends with #MeToo advocates before the fit hit the shan. Or, more simply, maybe he assumed that if Weinstein could be taken down, it’d be a matter of time before Farrow or some other reporter came for him.