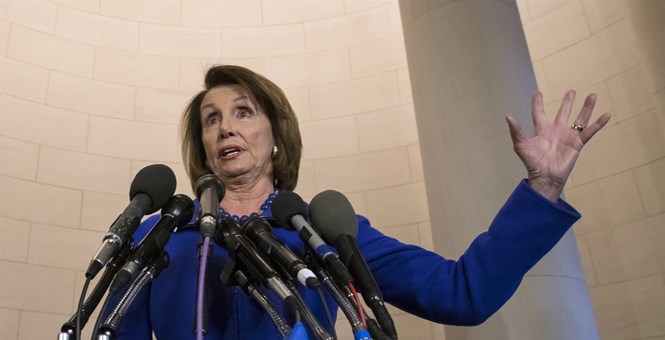 House Minority Leader Nancy Pelosi spoke about border security during her weekly press conference Thursday.  Along the way, she tripped up when she referred to the attacks of 9/11/01 as an ‘incident’. And, she’d like to set the record straight – she wants you to believe that Republicans are weak on border security.

Bless her heart. Rep. Pelosi is not the most articulate of politicians but my goodness, to hear her speak these days is to watch an exercise in performance art. There are few issues more heatedly debated than securing America’s borders but to hear Pelosi as she blames Republicans for the problems of border security, well, it is just ridiculous.

Pelosi hit upon the 9/11 Commission’s recommendations as a way to criticize Republican reaction to the terrorist attacks that resulted in almost 3,000 deaths.

“We have a responsibility to protect our borders. All of our borders,” Mrs. Pelosi said. “Let’s make no mistake about that. Democrats have been strong on that point. All of our borders. In fact, I said to some of you before, when we had the 9/11 incident and the commission was formed — and they made their recommendations — they made recommendations to protect America, but the Republicans would never take them up. And some of it was about our borders. The Republicans would never take them up.”

Nancy Pelosi refers to the 9/11 terror attacks that killed nearly 3,000 Americans as just an "incident."

Pelosi then falsely stated the Trump admin separated families because they believe moms "who want to escape rape, murder and gang violence for their child" are "unfit." pic.twitter.com/JLIwLwzCYu

Well, taking that criticism on its face value, the logical next step is to look up the work of the commission and find out what happened with their recommendations. A quick Google search finds the report issued by the commission as their work came to a conclusion. The report was issued in August 2004. Most of the recommendations have been implemented. The initial report on the implementation status of the recommendations was issued in December 2006 and shows much progress at that time. Democrats didn’t take back Congress from the Republican majority until the election of 2006 so they were not even officially leading Congress until January 2007.

To now claim that the Trump administration is separating families at the border because the mothers are ‘unfit’ is just insane. Family separation was implemented because unlike previous administrations, the Trump administration decided to actually follow the law. Children are not jailed with adults in this country and if the policy of catch and release is to be suspended, there are no other options but to detain the illegal aliens as they cross the border.

Nancy Pelosi is a member of the political party that now calls for the abolishing of ICE and denigrates border patrol agents in the most disrespectful of terms, to put it mildly. Not to mention that Pelosi couldn’t even utter the words ‘terrorist attacks’ in describing 9/11, some 17 years later. It wasn’t an ‘incident’, it was a plot to murder as many Americans as possible with terrorist attacks from the air.

The open borders crowd is not at all happy with the fact that President Trump is following through with his campaign promise of securing the borders and prosecuting illegal aliens. As Democrats campaign for re-election and with an eye toward 2020 presidential runs, marches have been held and dramatic stunts at the border detention centers are common. The president has agreed to U.S. military bases to house detainees, too.

A Pentagon spokesman tells @VOANews all of the paperwork had been completed for Goodfellow AFB in #Texas to start building detention facilities for unaccompanied minors caught illegally crossing the southern U.S. border, "if needed." https://t.co/n082QRRjZR

That paperwork includes an environmental assessment of the base grounds and memorandums of understanding from both the Pentagon and the Department of Health and Human Services (HHS) detailing how the base will be used and secured, said the spokesman, Army Lieutenant Colonel Jamie Davis.

Last month, HHS asked the U.S. military to prepare to shelter thousands of undocumented migrants, including as many as 20,000 children, while the Department of Homeland Security (DHS) requested the erection of tents at three separate facilities for up to 4,000 people.

The Pentagon offered Goodfellow for HHS to hold unaccompanied minors and Fort Bliss, also in Texas, for DHS to hold detained families.

You may remember the outrage over proposed tent cities for sheltering illegal aliens, though that solution has been used for some time now, long before Trump took office. It’s just now an outrage, though, because, Trump.

I don’t know how Republicans can be accused of being weak on border security with Trump continuing to declare that he will build a wall on the southern border, enforcing current immigration laws on the books, hiring additional border patrol agents and sending some National Guard troops when necessary. Trump rescinded his order to separate families and they are now detained as a family unit. Child trafficking and sex trafficking is rampant at the border. Despite the fantasy world views of the open borders crowd, not every adult bringing a child illegally over the border is of pure intentions.

None of this is easy. For Nancy Pelosi to now say in hindsight that Republicans failed to sign into law all of the 9/11 Commission’s recommendations so that proves a weakness in enforcing border security is a standard big government solution. Just sign on the dotted line for blanket reforms and everything will magically be fine. To say nothing was done at the time is just another election year campaign lie.