Is a deal for Julian Assange in the works? 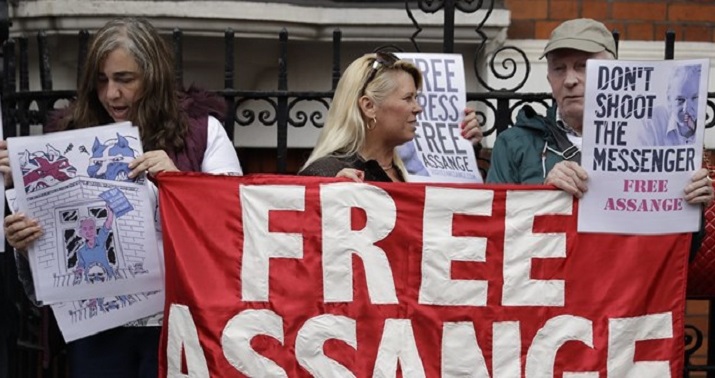 Last week we learned that Ecuador was about to cancel the asylum of their long-term guest at their London embassy, Julian Assange. At that point, I was moved to ask if this might finally be the end for the Wikileaks founder and which jail he was most likely to wind up in. I thought the highest probability was a long stay in a British jail while he fought extradition to the United States.

But perhaps I spoke too soon. CNN reports that there’s some backroom diplomacy going on this week with a couple of countries involved. They’re discussing ways in which poor Julian’s ailing health might be seen to and if it’s possible to just whisk him away to safety somewhere else.

Assange would face arrest if/when he leaves the embassy because he skipped bail in 2012 — when Swedish authorities were seeking his extradition to face accusations of rape. Last year Sweden suspended the investigation, but Assange’s lawyers fear his arrest would be swiftly followed by a US extradition request. Assange maintains his innocence.

“For us protecting him from US extradition is absolutely paramount, and the most important and fundamental principle that must be respected,” Robinson told CNN this week.

“There should never be a situation where a publisher is sent to the US to face prosecution for that activity, so we will, if forced, fight his extradition in the British Courts.”
The Ecuadorean government wants the case resolved. Ecuador’s recently elected president, Lenín Moreno said in Madrid Friday that his government was in dialogue with the UK and wanted a solution that guaranteed Assange’s life would not be in danger. He described Assange’s long confinement as “against human rights.”

CNN is focusing on the question of U.S. extradition and leaning on unconfirmed rumors that there is a sealed indictment awaiting Assange if we can get our hands on him. But it’s not for the Russia investigation. This one dates back to the release of hundreds of thousands of classified documents stolen by Chelsea (then Bradley) Manning.

Ecuador’s concerns over Assange’s health, having been negatively affected by all that time “in confinement,” seem strange to say the least. If they were so worried about his medical condition they should have kicked him out years ago. And just for the record, he hasn’t been “in confinement.” He could have walked out of that embassy any time he wanted to, starting on June 19, 2012.

As far as the “ongoing discussions” between Great Britain, Ecuador and Spain, I’m left wondering why Ecuador and Spain even have a seat at the table if Assange comes out of the embassy. Once he leaves, Ecuador has no control of him beyond the fact that they made him a citizen of their country last year. Spain’s claim is even more tenuous. This should really be between the Brits and the United States. (And possibly Sweden if they wanted to bring up the rape charges again.)

Of course, the other complicating factor that I brought up last week is still in play. Does Donald Trump really want Julian Assange parachuting into the middle of the current investigations and debates? To paraphrase an old movie quote, a guy with a mouth like that could cause a lotta problems in this town. If our Justice Department doesn’t act and the Brits cut him loose on the unlawful flight charges with time served, he could conceivably just get on a plane. And if he makes it to Ecuador nobody will be able to touch him.