A Democratic President From Trump Country? 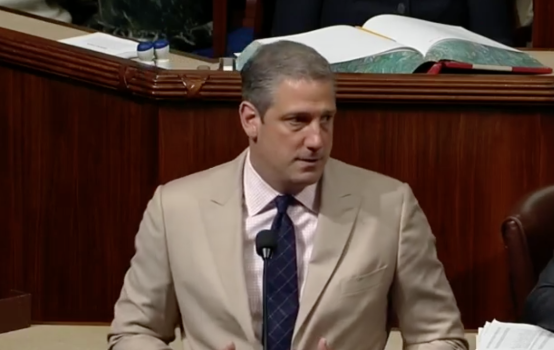 We are still a full year away from having to endure another presidential primary, but already it’s assumed that the field of aspiring Democrats will be the largest in recent memory. Because it’s never too late for a would-be candidate to raise money and make connections, several big-name Democratic heavyweights have already started doing the presidential prep work. Ads touting Senator Kamala Harris’s legislative initiatives are all over Facebook. Senator Cory Booker is using this summer’s midterm campaign season to stump for Democratic congressional candidates. And Vice President Joe Biden, perhaps the highest profile Democrat in the country after President Barack Obama, has continued to tell his friends that he is considering a third presidential bid.

But it may be a relatively obscure rank-and-file congressman from the industrial Midwest who stands the best chance at winning over the blue-collar voters who cast their ballots for Donald Trump in 2016. Congressman Tim Ryan (no relation to House Speaker Paul), the eight-term representative from Youngstown, Ohio, is putting himself out there as presidential material. Indeed, according to The Intercept, Ryan is already telling colleagues, friends, and party officials that he will be running for the Democratic presidential nomination. And lest you think this is empty bluster, Ryan has hired Pete D’Alessandro, the man who served as Bernie Sanders’ campaign coordinator in Iowa (a state Sanders lost by a whisker).

Ryan, in other words, is doing what people thinking about running for president usually do before declaring their candidacies: traveling multiple times to early primary states like Iowa and New Hampshire; hiring veteran political consultants; making waves by whispering his intentions into other people’s ears, knowing that the remarks will make their way into the press; building relationships with members of his party’s conference.

Is there even a sliver of a chance that Ryan will win the 2020 Democratic nomination, let alone be victorious against a president who can carry the news cycle, motivate his base voters, and crack the whip on his party like no other? It’s impossible to say. Nobody outside of northeast Ohio really knows who Tim Ryan is. In a potential field with the likes of Harris, Booker, Sanders, Biden, Senator Elizabeth Warren, Governor John Hickenlooper, Mayor Eric Garcetti of Los Angeles, and any number of other could-be candidates who have far more national recognition, Ryan starts out at a disadvantage. At a time when railing against the Democratic establishment is the popular thing to do, he may struggle with branding himself as a rabble-rousing populist trying to burn down the status quo, having been in the political business his entire adult life, first as a congressional aide and then as a member of Congress himself after taking the seat of his old boss in 2002.

But the Ohio native also has an intriguing backstory. He isn’t your typical partisan who will oppose an idea just because it was authored by the other side. Republicans and Democrats in Ohio like the guy on a personal level. While he bashes Trump as hard as any other Democrat (he called Trump’s joint press conference with Russian President Vladimir Putin “a disgraceful setback to the United States’ global leadership; an insult to those serving in our intelligence agencies; and a disheartening betrayal of every servicemember defending the U.S. government’s interests against Russian government hostility”), Ryan isn’t out there screaming for Trump’s impeachment and removal. Nor does he focus on the Russia investigation, which he sees as a distraction from the issues his constituents back home care about (“the mortgage payment, how they’re going to pay for their kids to go to college, what their energy bill looks like”). And while he’s a big supporter of President Obama’s Deferred Action for Childhood Arrivals (DACA) program and has voted against GOP bills prohibiting federal grants to sanctuary cities, Ryan hasn’t jumped on the kill ICE bandwagon either. As he tweeted on July 2, “Giving ICE a new name or giving some other agency ICE’s job will have no effect whatsoever as long as @realDonaldTrump chooses to use immigration enforcement as a means to stoke division and inflame racial and ethnic animosity.”

Tim Ryan’s most valuable attribute is that he lives and works in a part of the country that turned from blue to red during the 2016 election. Between 2001 and 2013, two of the five counties Ryan represents in Congress lost 19,000 manufacturing jobs. It is these voters—non-college educated whites who feel ignored by a Democratic Party led by coastal dwellers and funded by coastal donors—who blanched at the possibility of a President Hillary Clinton. Ryan is a man raised in the heartland and a firm believer in the old philosophy of the Democratic Party as an organ for working people. He had the gall to challenge Pelosi for the post of House Democratic Leader when everybody else was either too frightened or saw a challenge as bad for the party. Ryan’s insurgent bid wasn’t enough to dispatch the Pelosi juggernaut, but he still netted a third of the conference.

At this point in time, 18 months before the Iowa caucuses, talking about 2020 contenders seems very premature. Americans are still recovering from 2016; they’re hardly ready to think about the next presidential contest.

Nonetheless we’re currently in the period referred to by political professionals as the “invisible primary.” Democratic presidential aspirants are making moves, even if they aren’t broadcasting them. Tim Ryan is one of those people, and it would be sound advice not dismiss him.