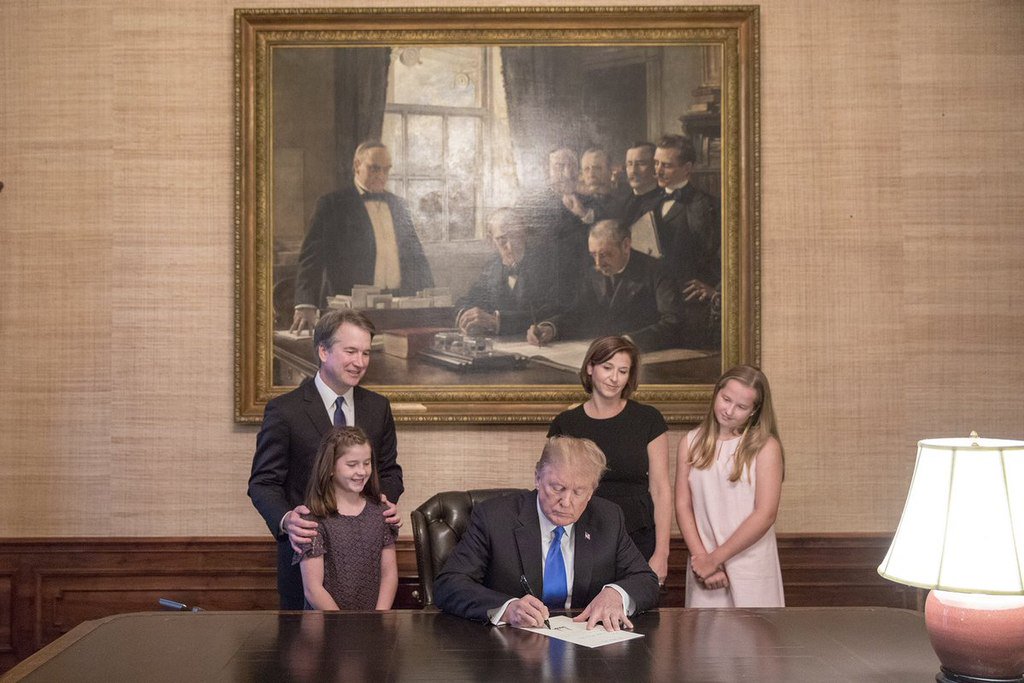 While Brett Kavanaugh’s nomination to the Supreme Court has been warmly received on the Right, libertarians haven’t been uniformly thrilled. The night of the announcement, Rep. Justin Amash (R-MI) tweeted that it was a “[d]isappointing pick, particularly with respect to his #4thAmendment record,” also mentioning “government surveillance” as an area where Americans can’t afford a “rubber stamp.”

A few days later, my Cato Institute colleague Matthew Feeney did a critical dive into Klayman v. Obama, where the U.S. Court of Appeals for the DC Circuit rejected on standing grounds a 2015 challenge to the National Security Agency’s telephony-metadata collection. Kavanaugh wrote separately to say the program passed constitutional muster regardless. Reason’s Jacob Sullum similarly identified Kavanaugh’s “Fourth Amendment blind spot” (while lauding other aspects of his jurisprudence).

But should this be that big a worry? Given that the bulk of Kavanaugh’s legal opinions, as well as his speeches and academic writings, apply constitutional structure and push back on the administrative state—the bread-and-butter of the DC Circuit’s docket—should we really extrapolate from one squib of a concurring opinion to make Kavanaugh out to be some knee-jerk statist? After all, he isn’t some reflexive pro-government judge like Merrick Garland.

Let’s start with Klayman, which is without doubt Kavanaugh’s worst case from a civil-libertarian perspective. Kavanaugh wrote that the NSA’s suspicion-less collection of metadata is “entirely consistent” with the Fourth Amendment and “fits comfortably within the Supreme Court precedents applying the special needs doctrine.” (The “special needs” doctrine relates to government actions beyond normal law enforcement practice, such as at borders or drunk-driving roadblocks.)

The problem is that the NSA’s bulk telephony collection was not the kind of limited search connected to an isolated government interest—and the Privacy and Civil Liberties Oversight Board’s (PCLOB) 2014 report found that the program was not critical to the ongoing War on Terror. So even on the government’s own terms, Kavanaugh is on thin ice.

But this was a two-page opinion as part of an emergency appeal, and one that has likely been superseded by Carpenter v. United States, where the Supreme Court this past term ruled that police need a warrant to access cellphone location data. That is, the “third-party doctrine,” whereby we lose constitutional protection for information that we turn over to someone else, works differently in the digital age.

As the PCLOB’s former executive director recently wrote, under Carpenter, “the third-party doctrine does not extend to the type of collection conducted under the [program at issue in Klayman], and that program would violate the Fourth Amendment. The bulk collection of call detail records . . . creates the same privacy risks as the cell site location information that is protected by the Fourth Amendment under Carpenter.”

Based on Kavanaugh’s body of work, one can predict that he will be receptive to the kinds of constitutional protections that Chief Justice John Roberts (for the majority) and Justice Neil Gorsuch (in nominal dissent) asserted in Carpenter. For one thing, look at Kavanaugh’s writings on national security. In a 2009 law review article, he wrote that “constitutional text makes clear that the President does not enjoy unilateral authority with respect to all incidents of war. The Constitution gives the Congress not only the power to declare war . . . but also the power to raise armies, to fund wars and armies, and to regulate captures, among other powers.”

Accordingly, Kavanaugh has both rejected executive supremacy in favor of judicial review and praised Justice Antonin Scalia’s dissent in Hamdi v. Rumsfeld (2004), which argued that the military can’t detain U.S. citizens absent a congressional suspension of habeas corpus. Simply put, Kavanaugh takes an originalist and textualist approach to the powers asserted and statutes at issue, rather than blindly deferring to the executive as many judges might.

Even more importantly, because most judges (rightly) distinguish the power that government officials have when acting out of a concern for national security from run-of-the-mill law enforcement, Kavanaugh has displayed a strong, if limited, Fourth Amendment record. Most notably, in Jones v. United States (2010), he explained in dissent that the Fourth Amendment protects property and privacy interests in the context of the government’s physical intrusion on a defendant’s car to install a GPS device. Kavanaugh’s reasoning was vindicated two years later when Justice Scalia adopted his approach for a Supreme Court majority.

In a speech at George Mason University Law School in June 2016—before its formal renaming after the departed Scalia—Kavanaugh spoke with great respect about the rights of criminal defendants, arguing that Scalia was “the most vocal defenders of the Fourth Amendment’s guarantee against unreasonable searches and seizures”—particularly highlighting his dissent in Maryland v. King (2013), in which the Supreme Court upheld procedural DNA swabs of arrestees.

Kavanaugh then lauded Scalia’s role as the court’s “most tireless advocate for the right to trial by jury [under the Sixth Amendment].” Accordingly, in United States v. Moore (2011), Kavanaugh found that a criminal defendant’s Confrontation Clause rights had been violated when the government introduced Drug Enforcement Agency reports at trial without allowing the defendant to confront the report’s author. In United States v. Nwoye (2016), he reversed the denial of a defendant’s ineffective-assistance-of-counsel claim in a case where her lawyer had failed to present expert testimony on battered-woman syndrome.

Kavanaugh has also been a leading advocate of interpreting statutes to incorporate robust mens rea requirements, protecting individuals from criminal sanction unless the government establishes a “guilty mind.” See for example his dissent in United States v. Burwell (2012), in which he argued that a defendant could not face a mandatory 30-year sentence for carrying a machine gun during a crime because the government had not proven that he knew the weapon to be a machine gun. Or his concurrence in United States v. Williams (2016), where he commended a majority opinion that reversed the conviction of a gang member involved in a hazing ritual “to underscore the critical importance of accurate instructions to the jury on mens rea requirements.”

So too in white-collar cases, where regulatory “crimes” have ballooned in recent years. In Lorenzo v. SEC (2017), Kavanaugh dissented from a decision upholding the Securities and Exchange Commission’s broad theory of liability in enforcing fraud laws against a broker who transmitted a fraudulent statement dictated by his boss. Last month, the Supreme Court agreed to review the case (although of course Kavanaugh will be recused from it if he is confirmed).

All this goes without mentioning other issues that make libertarian ears ring, ranging from the Second Amendment—he would’ve struck down DC’s gun-registration requirement and ban on semi-automatic rifles, using an historical rather than a “tiers of scrutiny” approach—to a skepticism of broad judicial deference (Chevron, Auer, etc.) to executive agencies. As he repeated at his nomination ceremony, “the Constitution’s separation of powers protects individual liberty.”

In sum, libertarians aren’t going to agree with Kavanaugh on everything—we don’t agree on everything ourselves!—but he’s a big step forward for constitutional liberty. An exhaustive treatment of his record is beyond the scope of this essay, but suffice it to say that while questions about the Fourth Amendment, privacy, and criminal justice may be worth pursuing at his confirmation hearings, they’re no reason to oppose his nomination.