‘Teen Titans Go! To The Movies’ Is A Smart, Fun Romp For Kids And Parents 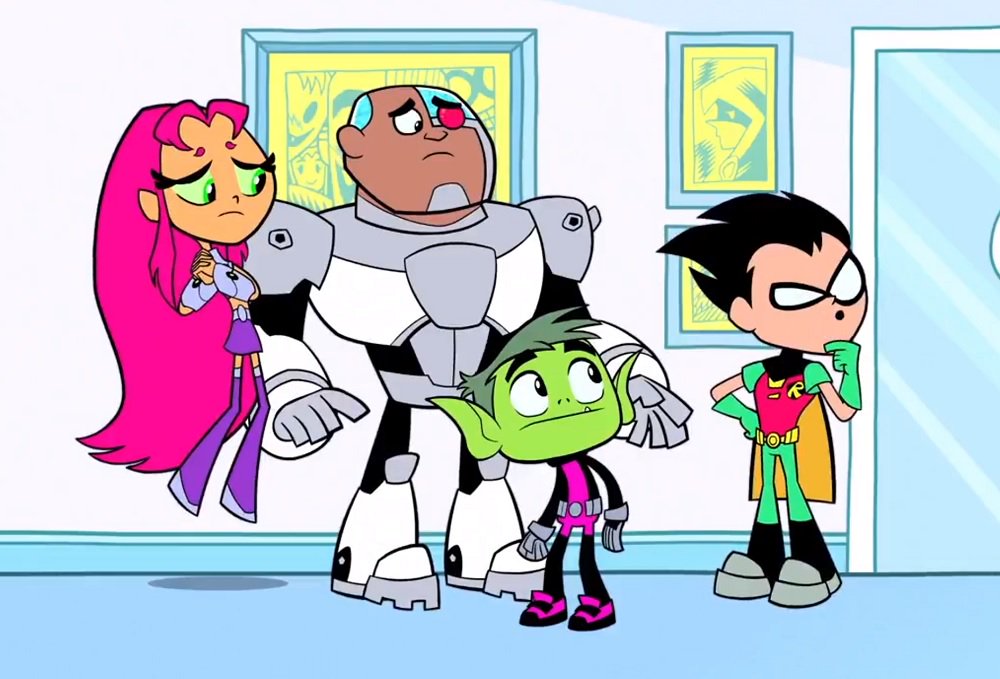 One of the great challenges of raising elementary age kids is the awful television shows they watch at piercing volume while you try to read a book or tidy the living room. It is the subject of much conversation with my friends who have similarly aged children. But one exception comes up over and over in such discussions, The Cartoon Network’s ‘Teen Titans Go,” a DC comics-based cartoon, is the favorite of almost all the adults I talk to.

This weekend the Teen Titans, Robin (yes, that Robin), Raven, Beast Boy, Cyborg, and Starfire took to the big screen in a fun romp of a film that lives up to the charming and intelligent TV show in which they usually reside. Two things stand out in both the Teen Titans TV show and movie: a clever plot and language and fantastic use of music in multiple pop genres.

Not surprisingly, Cartoon Network has spent the last month or so whipping kids into a frenzy of excitement about the movie. Friday morning, as my wife, son, and I were getting ready to go, my son asked me if I knew his favorite part of movies. I admitted I did not. He said his favorite part is the exposition.

Now, my wife and I are both writers. She’s in fact a playwright, so I took some pride imagining he had overheard us and sopped up some of the family business. In fact, he had learned about it from the TV show, in an episode about the upcoming movie. That’s what I mean about the show being smart.

Story Within The Story

The story of the movie is that the Titans, particularly Robin, are considered jokes by real superheroes like Superman and Wonder Woman. Robin is desperate to have his feature film marshal the Titans on a mission to find an arch nemesis, gain respect, and become stars of the silver screen. This concept borrows heavily from films like “The Muppet Movie,” where the movie you are watching is the movie they are trying to make. It’s a very effective way to make the small to big screen jump.

The film’s self-awareness gives the plot a layered feel, and is a sophisticated story-telling device for 8- to 10-year-olds. The postmodern “story in the story” style is challenging in exactly the way the TV show often is. Standing above these twists and turns is an excellent performance from Will Arnett as Slade, the villain. His goofy, offhand, and casual style that we first enjoyed in “Arrested Development” provides perfect breaks from the scrambling plots.

The movie’s music, by Jared Faber, lives up to the TV show’s tradition, which produced teeny bop pop classics like “The Night Begins To Shine,” and “Rise UP.” The Titans’ theme song, a rap anthem with a strong Beastie Boys feeling, is fantastic. In fact, Beast Boy sounds a lot like Ad Rock, Cyborg like MCA, and Robin like Mike D. Starfire. Raven does a pretty good Luscious Jackson.

The best number might be “Upbeat Inspirational Song About Life.” Performed by Michael Bolton, it feels like an early ’80s Michael McDonald B-side, complete with sax solo. Each song uses a different genre to great effect, and peppers the film with an awful lot of fun.

The only misstep in the film’s execution is that it focuses a bit too much on Robin. It fails the Titan Bechdel test, as not only do we never really see the rest of the Titans without Robin, pretty much everything in the plot is about him. A little more from the rest of the gang would have been nice, but at a kid-size hour and a half, there is only so space.

Robin’s story is compelling, though. Overemotional, quick to anger and sadness, and possessed of an inordinate sense of his value, Robin begins as the kind of young male character that Jordan Peterson would say is not competent. For much of the movie he has to be rescued and doesn’t seem to be making much progress, but when faced with a choice between movie stardom and his friends, Robin begins a transformation that sends a lot of positive messages.

Needless to say, my 8-year-old was thrilled by the movie. “That was the best movie ever!” he reported, although, in fairness, that is a common reaction from him.” But just as when we watch with him at home, my wife and I also left with smiles on our faces. It’s hard to say if Teens Titans can be a franchise with movie legs, (a dark, live-action Titans TV series for adults just released its first trailer) but for right now, it is a great example of how a smart fun set of characters and stories can allow kids and parents to have a great time together.