The Latest: 2 more towns ordered to evacuate as fires grow 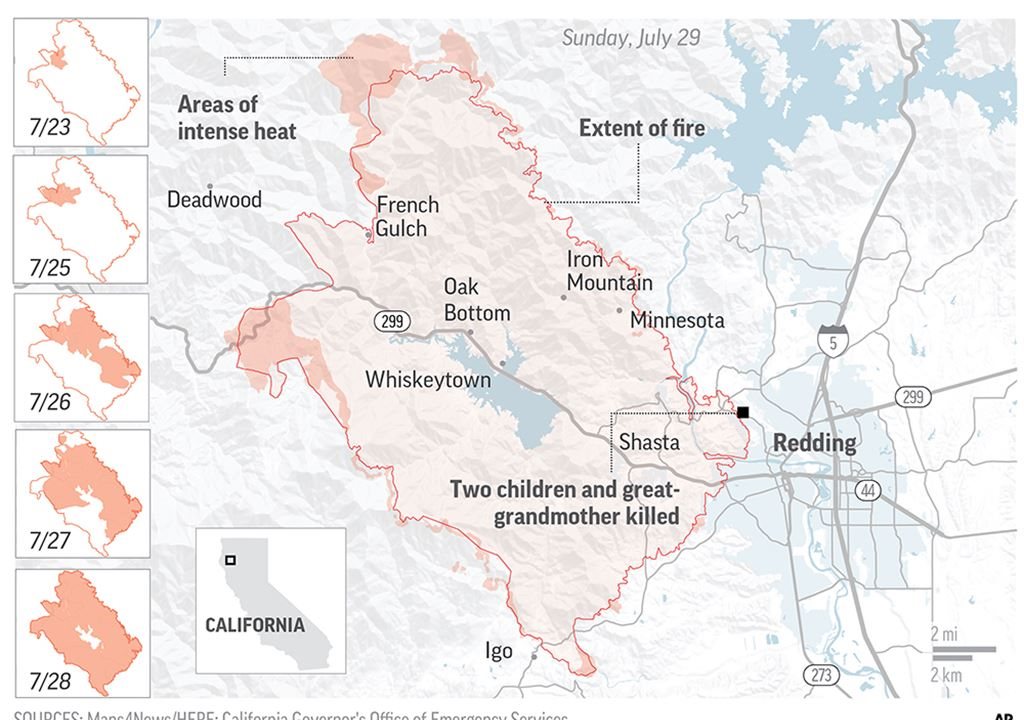 LAKEPORT, Calif. (AP) — The Latest on fires in California (all times local):

Northern California fire officials have added residents of two towns near Clear Lake to the list of those ordered to evacuate.

The notice was issued Monday for the towns of Kelseyville and Finley and brought the number of people affected by the Mendocino fires to about 18,000.

The fire’s push to the east and north forced evacuees from a shelter that had been set up at Kelseyville High School.

Sixty-three-year-old Michelle Mata says she is already tired and drained and now has to evacuate a second time.

Derick Hughes II remained at his property in Nice (nees), California, despite mandatory evacuation orders prompted by a wildfire threatening the area.

Hughes said Monday that he is using sprinklers to wet his roof and removing yard plants that could catch fire.

The 32-year-old Marine Corps veteran says he sent his wife and two daughters to safety Sunday along with three carloads of belongings.

Hughes says he and about five of his neighbors chose to protect their homes against fire and looters, despite an evacuation text alert they got Sunday evening.

Lake County officials said Monday about 14,000 people are under evacuation orders. Another 1,000 have been displaced in neighboring Mendocino County.

An official says at least 14,000 people are under evacuation orders in an area of Northern California that has been hit by deadly wildfires in the past four years.

Another 1,000 people have been displaced in neighboring Mendocino County.

Paulich says residents have been heeding evacuation orders because they have seen the destruction caused by past fires.

The impoverished county about 110 miles (180 kilometers) northwest of Sacramento has been hit by several wildfires since 2015 that destroyed thousands of homes and killed at least four people.

Some evacuations orders have been lifted around a Northern California wildfire area near the city of Redding.

The California Department of Forestry and Fire Protection said people can return to several neighborhoods in western Redding as of Monday morning.

The huge blaze near Redding has displaced 38,000 from their homes and killed six people.

Fire officials say the deadly blaze has slowed its growth after days of rapid expansion.

The blaze burning for more than a week has scorched 155 square miles (400 square kilometers) and destroyed 723 homes.

It has killed two firefighters and four civilians.

Police say five people have been arrested on suspicion of entering areas of Northern California evacuated due to an explosive wildfire, including a man dressed in camouflage and carrying a loaded handgun.

The Record Searchlight reports Monday that police arrested Mitchell Stuebgen late Saturday in an evacuated zone of Redding, California, where a massive wildfire has displaced 38,000 from their homes and killed six people.

Police say Stuebgen was dressed in camouflage and was carrying a loaded handgun, a billy club, nunchucks and a concealed dagger.

Authorities on Sunday arrested 44-year-old Brian Cordoza and 37-year-old Frank Webber, both of Redding for being in an evacuated zone.

The Sacramento Bee reports that 25-year-old Jade Ball and 19-year-old Jack Fannin, of Redding, were also arrested Sunday after police found what they said was evidence tying them to several burglaries.

A man whose wife and two great-grandchildren were killed by the huge wildfire in Redding, California, says he did not receive any type of warning to evacuate.

Ed Bledsoe tells CBS News he did not know his home was in danger when he left his wife, Melody, and the 4- and 5-year-old children to run an errand on Thursday.

Bledsoe says he received a phone call from his wife 15 minutes later saying he needed to get home because the fire was approaching. He says one of the children told him the fire was at the back door.

Bledsoe says he tried to return but the road was blocked with cars and flames prevented him from returning on foot.

Shasta County Sheriff Tom Bosenko tells the network there’s an investigation into whether the Bledsoe home received a warning call or a knock on the home’s door. The sheriff says there is evidence that door-to-door notifications were made in the area.

Mendocino County Undersherriff Matthew Kendall says 1,000 people were order to evacuate in his county. The rest are in Lake County, where residents of the town of Lakeport with a population of 5,000 were ordered to leave Sunday night.

The blazes that started Friday are about 100 miles (160 kilometers) southwest of Redding, where California’s largest wildfire is burning and has killed six people.

Officials said Monday that 723 homes have been destroyed by that fire, up from a previous count of 657 homes lost.

Authorities have arrested two people on suspicion of looting homes that had been evacuated due to an explosive wildfire.

The Sacramento Bee reports that 25-year-old Jade Ball and 19-year-old Jack Fannin, of Redding, were found with what police said was evidence tying them to several burglaries.

The so-called Carr Fire prompted mandatory evacuations for tens of thousands of people in Redding, a city hundreds of miles north of San Francisco. It has destroyed over 650 houses.

Authorities say a homeowner who stayed behind flagged down an officer after he noticed evidence that people had been in his house.

Officers found a nearby home with evidence of a broken-in door and discovered electronic items stacked by the front door. Police say they do not believe the homeowners placed the items like that before evacuating.

Thousands more are fleeing their homes after wildfires surged near a small lake town in Northern California while farther north firefighters made progress in a battle against a deadly blaze.

Crews stretched to their limits across the state are fighting flames that have claimed the lives of two firefighters and six civilians.

Residents of the waterfront town Lakeport fled Sunday after a major flare-up of two fires that combined across Mendocino and Lake counties destroyed at least four homes. Lakeport, home to about 5,000, is around 120 miles north of San Francisco.

To the northeast, a massive fire near Redding slowed for the first time since days of explosive growth.