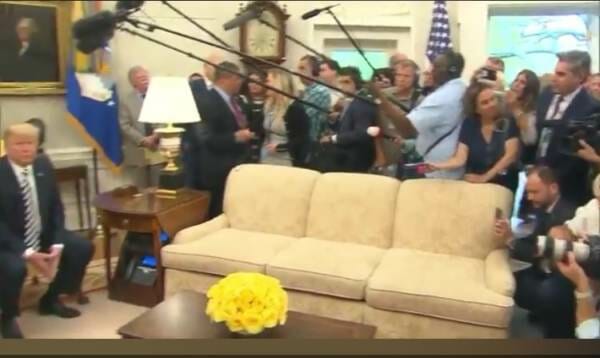 After private meetings between the two world leaders they held a joint press conference.

As per usual, the pool reporters were screaming questions at the President in the Oval Office.

A White House aide quickly shouted down Acosta and told him to get out of the Oval Office.

The Russian collusion narrative is a hoax completely made up out of thin air by Hillary, promoted by Obama’s weaponized FBI and propped up by the media sycophants.

Watch Jim Acosta get shouted down by a White House aide…

Jim Acosta also complained on his Twitter account about being told to get out of the Oval Office.

This audio is a pretty good example of how the WH aides also known as press wranglers are almost screaming as reporters try to ask questions of Trump in our “pool sprays.” https://t.co/rngjFTf93b