Report: Trump privately agrees to hold off shutdown fight over immigration until after the midterms 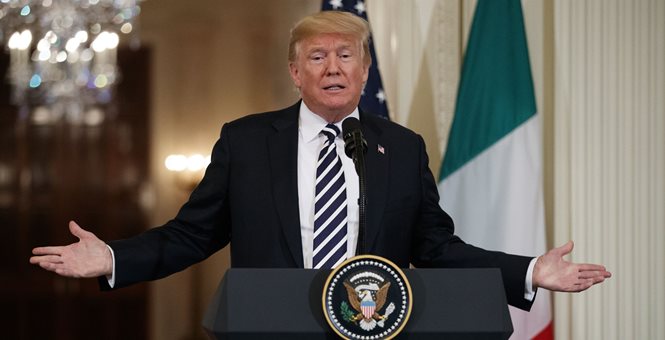 I kid. This is the prudent course, it should go without saying. Shutdown politics are always more dangerous for Republicans than for Democrats, especially when the GOP owns the White House and both chambers of Congress. A pre-midterm shutdown would terrorize congressional Republicans and quickly fracture the party as MAGA Nation demands that their representatives not back down on border security while establishmentarians howl for Trump to end the standoff. Sounds like POTUS sees the train in the distance and is stepping off the tracks early.

If so, it means Steve Bannon’s base strategy for the midterms will be hamstrung. Bannon was last seen on Fox News warning Republicans that Democrats will impeach Trump next year if they don’t turn out en masse this fall. He’s calculating, not insanely, that there just aren’t many real swing voters in play for November. Either you’re voting for Trump despite your misgivings about him because four percent GDP growth is no joke or you’re voting against him because your misgivings about him are no joke despite four percent GDP growth. If all of that is already priced in, the only variable Trump and Republicans can still control is their own side’s turnout. That means ominous impeachment warnings plus saber-rattling about a September showdown with Democrats over government funding in the name of securing the border — until today. Oh well:

President Trump has been threatening to close down the government if Congress doesn’t meet his immigration priorities, but he has privately agreed to put off a potential shutdown or any fight over border wall funding until after the midterm elections, an administration official said Monday…

Mr. Trump discussed the budget standoff last week in an Oval Office meeting with top aides and Senate Republican leader Mitch McConnell (R., Ky.) and House Speaker Paul Ryan (R., Wis). Mr. Trump supports a plan to avert a shutdown before the election by passing some less- controversial spending bills and a short-term patch that would keep the rest of the government running, the administration official said.

“The president made it very clear to the leadership that a fight was coming and he’s done putting it off,” the administration official said. Still “he understands the political practicalities of having to put it off until after the election but it’s coming in early November and early December.” He added: “The president sees merit in having this battle after the election.”

I wouldn’t get too comfortable with private assurances if I were Ryan or McConnell. Trump is famously prone to changing his mind, especially on immigration. Remember that live televised immigration summit at the White House some months ago in which he seemed ready to make all sorts of deals with Democrats, only to turn hardline again after the meeting? Remember when he agreed to the terrible omnibus spending bill and caught some rare flak from his nationalist base for not demanding wall funding as part of it, leading him to vow publicly to never sign such a terrible bill again? There’s bound to be pressure on him from hardcore border hawks not to duck this fight even for a few months, no matter what it might mean to the GOP’s midterm prospects. In fact, there already is, courtesy of — who else? — the Freedom Caucus:

Trump’s message is consistent with the one being made by [Jim] Jordan, the former Freedom Caucus chairman running for Speaker who said Monday that “heck yes!” conservatives would fight tooth and nail to stop GOP leaders from punting a fight over funding the border wall and other Trump priorities until after Election Day.

“How is that being consistent with what we promised the American people? I think actually just the opposite is what we should be doing,” Jordan said in an interview with the Conservative Review.

“Do we want to nationalize these elections and fire up Republican and Trump voters to come out and vote for us?” Jordan asked. “Then we better just not kick the can past the elections; we better actually do the things we said we were going to do.”

Jordan represents a solid red district and is running for Speaker. A pre-midterm shutdown fight would cost him nothing personally; if anything, it’ll enhance his “but he fights!” purity, which is nice for him and not so nice for his purple-district colleagues. The president likes him, though, which is why only a fool would discount the possibility that Trump’s ear will be bent and he’ll decide that September is a fine time for the big border battle royal after. “Negotiating with President Trump is like negotiating with Jell-O,” Chuck Schumer once said about Trump’s penchant for changing his mind. A GOP aide told The Hill, “One of the calculations that members of Congress will have to make is whether or not this time is any different from every other time the administration has promised a border war funding.” Which is a fair point: Trump has been spoiling for this fight since the beginning of his presidency. Asking him to delay it yet again, however strategically sound, may be asking too much as border hawks go to work on him behind the scenes.

It’s worth noting, though, that his rhetoric about this has softened a bit in recent days. He’s “willing” to shut down the government, he tweeted recently, but being willing and being intent are two different things. Being “willing” implies that he’ll leave it up to Ryan and McConnell and if they want a shutdown, which they don’t, he’s onboard:

I would be willing to “shut down” government if the Democrats do not give us the votes for Border Security, which includes the Wall! Must get rid of Lottery, Catch & Release etc. and finally go to system of Immigration based on MERIT! We need great people coming into our Country!

He used “willing” again when he was asked about this at a press conference yesterday, as you’ll see below. A key question: If Trump did decide to dig in and veto any spending bill that lacked funding for new enforcement measures like the wall, is there any chance Ryan and McConnell would override that veto? Richard Shelby, chairman of the Appropriations Committee, was asked about that by the Weekly Standard and said, “I believe there’d be a lot of strong support on both sides to keep the government open.” Eh, I don’t know about that. Who’s going to vote to override the president’s shutdown veto? Conservatives won’t do it if Trump’s demanding that they dig in over immigration; they’d fear angering Trump’s voters. Democrats won’t do it either. They’d regard a pre-midterm shutdown as a godsend to them, a total political clusterfark for the GOP of Republicans’ own making. Why bail Trump and his party out of it by voting to end it? That shutdown would last a few days at least while left and right virtue-signaled, and finally they’d agree to some scaled-down bill that punted the matter until after the midterms. Just as Ryan and McConnell wanted all along.

President Trump: "I would be certainly willing to consider a shutdown if we don't get proper border security."