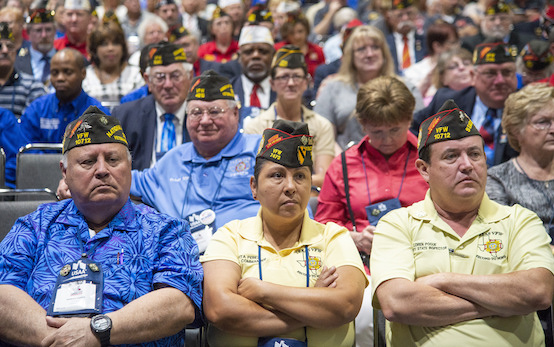 There are hundreds of local, state, and national organizations representing veterans, but there are only four that really matter: the American Legion, Disabled American Veterans, the Veterans of Foreign Wars (VFW), and the newest, the Iraq and Afghanistan Veterans of America (IAVA). These organizations are the 400-pound gorillas of the veterans movement: they have the numbers, power, and money, and they know how to throw their weight around. So it is that candidates scramble for the veterans’ vote by targeting this quartet, meeting with their local chapters, state conferences, and national conventions—like the VFW’s recent confab in Kansas City where last Tuesday Donald Trump appeared to what he thought would be a raucous welcome.

While the cameras focused on a crowd that seemed composed of over-the-top Trumpinistas, a number of those attending the speech say there was a more tepid response to his message than the cameras captured—and a much more uneven reception to his patented call-out of the assembled media. Trump’s press attack came in the midst of a defense of his trade policies, which had recently been blamed for costing jobs and dampening farm profits. Trump is nothing if not a counter-puncher, so halfway into his speech he turned to the subject of international trade.

“Oh, folks,” he intoned, “stick with us, stick with us,” and then pointed to the back of the room and the members of the media. “And don’t believe the crap that these people, the fake news…” and he left it at that. There were boos in the room, and some in attendance turned to the cameras. This was red meat for Trump: “I mean, I saw a piece on NBC today. NBC—not just CNN,” he said, continuing: “CNN is the worst…but I saw a piece on NBC—it was heart-throbbing. They were interviewing people—they probably go through 20, and then they pick the one that sounds like the worst. But they went through a group of people. In fact, I wanted to say, ‘I got to do something about this Trump,’” the president joked. The crowd laughed and the boos persisted.

It was a moment the VFW would like to forget, for even as Trump moved on, worries about the incident were rippling through the VFW’s leadership. “It wasn’t courteous and it’s not the way our organization treats our guests,” Joe Davis, the VFW’s director of public affairs, said in a telephone interview. Davis also soft-pedaled the crisis that it caused in the VFW leadership, explaining that this wasn’t the first time that a presidential appearance had generated controversy. But there is, of course, another side to the story. “The fact is that not everyone in the room booed,” a veteran who watched the Trump speech told me. “There were people there who just sat on their hands. That’s the truth. You should print that.”

Davis didn’t disagree, but he steered clear of the topic: “It was an unfortunate incident,” he said, “but I wouldn’t want to guess who booed and who didn’t. I’ll just repeat: the media were there as our guests and it’s our job to be good hosts.” Davis then pointed out that VFW spokeswoman Randi Law had issued an apology on behalf of the organization almost immediately after Trump finished his remarks. “We were disappointed to hear some of our members boo the press,” Law said. “We rely on the media to help spread the VFW message, and CNN, NBC, ABC, FOX, CBS, and others on site today were our invited guests. We were happy to have them there.”

In fact, as any number of veterans’ advocates point out, the VFW leadership was particularly sensitive to the boos because they know it was the press that made the treatment of veterans an issue in the 2016 campaign, which Trump used to fuel his populist message. In February 2007, The Washington Post published an expose by Dana Priest and Anne Hull of the shoddy treatment of combat veterans at Walter Reed Army Medical Center. When I mentioned the Priest-Hull story to Davis, he leapt on it: “And that’s not the only one like that,” he said. “Don’t forget the Arizona Republic’s series on the wait times at the VA Medical Center in Phoenix”—a front-page scandal that roiled the Obama administration, spurred calls for widespread reforms of the Veterans Administration, and cost VA Secretary Eric Shinseki his job.

Which is why the booing in Kansas City was a hot topic in Washington and the subject of a high-profile Martha Raddatz piece in The Washington Post on the day following Trump’s Kansas City appearance. Raddatz, a highly respected defense reporter, called out the VFW. “Have those veterans who booed and taunted the media in response to Trump’s cue forgotten that some members of the press corps are combat veterans?” she asked. “Have they forgotten that there are members of the press who continue to cover the military after suffering life-altering injuries while at the side of our courageous service members? Have they forgotten that since the wars in Afghanistan and Iraq began, hundreds of journalists have given their lives for their work, many times while reporting from U.S. war zones?”

Meanwhile, at least part of the reason that a large number of VFW members decided not to boo the press in Kansas City is because they know that during the Iraq war Donald Trump was nowhere to be seen. Then, too, many VFW members—“I would say about half of them,” Joe Davis told me—are veterans of the Vietnam conflict in which Trump did not serve. More bluntly, while many in the audience in Kansas City had been slogging through Vietnam’s jungles, Donald Trump was sitting at home with bone spurs.

In one sense it’s not a surprise that some VFW members would support baiting the media. After all, two out of every three veteran votes in the 2016 election went to Trump. The VFW also has a reputation for being the nation’s most conservative veterans’ organization. Back in 2016, the VFW pointedly took on Trump nemesis Barack Obama who, in a speech in Elkhart, Indiana, suggested that conservatives were seeding conspiracy theories and political falsehoods “on cable news stations, on right-wing radio,” as he phrased it. “It’s pumped into cars and bars and VFW halls all across America, and right here in Elkhart.” The VFW responded with an angry statement. “I don’t know how many VFW Posts the president has ever visited,” the organization’s national commander said, “but our near 1.7 million members are a direct reflection of America, which means we represent every generation, race, religion, gender, and political and ideological viewpoint.”

But what was true for 2016 is true still: veterans don’t like being lectured to by Trump or anyone else—and particularly when it comes to the VA’s medical services, what Vietnam combat medic Wayne Smith calls “the third rail of veterans’ politics.” “There’s real worry among veterans’ groups that Trump wants to privatize the VA,” he says. “That would be betrayal number one. It’s the one issue that could bring the veterans’ community together, that would unite it.”

Smith, a life-long veterans’ advocate, is a member of the board of directors of Iraq and Afghanistan Veterans of America (IAVA), which is non-partisan but leans more progressive. Smith noted that even after the VFW shifted the venue of the president’s speech from the convention center to a smaller auditorium, the president was still greeted by plenty of empty seats. “I think that veterans are starting to see who this man really is,” he told me by telephone, “and they’re beginning to worry. For a lot of veterans, this is about the oath we took—to preserve, protect, and defend the constitution. We’ve reached a limit. A lot of veterans take the president’s rhetoric at face value, but a lot less so now than before. And not on Russia, not on the VA—and not on the press.”

There is little question that Trump views his VFW appearance as a triumph, confirming that his support among America’s veterans is solid. But that is clearly not the case: for all those who booed the press at Trump’s urging, there were others who decided to be elsewhere, or to remain silent. When future political historians determine when Trump’s base “reached its limit,” they are likely to cite last Tuesday as that moment. In which case, history will confirm what is now becoming obvious: Kansas City wasn’t a triumph, it was a mistake.

Mark Perry is a contributing editor at The American Conservative. He is the author of The Pentagon’s Wars and Talking To Terrorists. Follow him on Twitter @markperrydc.