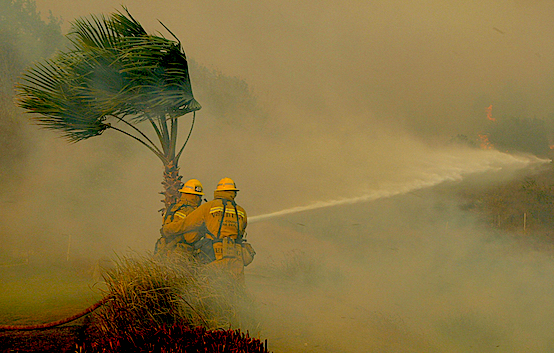 According to CNN, as of July 31, 17 different wildfires have been raging through California. These fires have charred more than a quarter million acres, destroying more than 1,100 structures, most of them homes. At least eight people have died.

The worst of these is the Carr Fire in Shasta County, which rates as the seventh most damaging in California history. Even after many days, most of these fires have not yet been contained, and so the dolorous statistics will certainly get worse.

Moreover, as we all know by now, these devastating wildfires are an annual occurrence; it’s been estimated, for instance, that the cost of the 2017 California fires, including recovery efforts, has reached $180 billion. That’s a lot of money—in fact, about 1 percent of annual GDP.

So what’s going on? Why are these fires such a costly perennial crisis? The most obvious issue is that the population of California is growing; it’s now nearly 40 million people, double what it was in 1970. With that many residents, it’s not surprising that some are pushing into rural areas, where folks are more vulnerable to the elements.

Yet of course, even urban areas are vulnerable, albeit for different reasons. Last year, for example, a fire consumed ritzy mansions in Bel Air; that conflagration first erupted in a nearby homeless encampment.

What’s so striking to this observer is our numb passivity in the face of such devastating fires. Oh sure, thousands of firefighters are actively, and bravely, combating the blaze—and just in the past few days, two firefighters have been killed in the line of duty.

Even so, California, and the nation as a whole, seem lackadaisical about tackling the fire problem. That is, for all our willingness to spend money to fight and recover from fires—which often means rebuilding homes in places that will be just as vulnerable to a new fire in the future—we aren’t willing to invest in tools that would quickly douse the flames before they can do real damage.

This deficiency in firefighting capacity is a matter of choice: our high-tech nation has chosen, without quite realizing it, not to develop the best possible techniques. For instance, if we look at photos of the firefighters today, we see that their basic kits consist of low-tech helmets and pickaxes. Yes, emergency responders have the benefit of helicopters, airplanes, and even orbiting surveillance satellites, and, somewhere on the back end, there’s big data to improve targeting and logistics.

But for the men and women who actually face fires, the equipment they use is little changed from 50 or 100 years ago. So it’s no wonder that there are so many injuries and fatalities. Back in 2013, the Yarnell Hill Fire in Arizona killed 19 firefighters in a single day. Despite firefighters’ courage and sacrifice, the human and economic losses are staggering.

Obviously we could do better if we wanted to. When this Baby Boomer was young, the commonly heard formulation was “if we can put a man on the moon, we can [fill in the blank].” Indeed, the “If we can…” formulation was applied so often, to so many issues—both serious and whimsical—that it became a national joke. Consequently the more popular sentiment in recent decades has been cynicism, even nihilism, about the prospects of any national endeavor. To be sure, it’s easy to dwell on societal failures, but the resulting bleak mindset has undercut opportunities for national betterment. And that’s why, for instance, we in America have let so much of our infrastructure fall apart.

Still, around the world, humans have accomplished much in recent decades, as detailed by Steven Pinker in his recent book, Enlightenment Now: The Case for Reason, Science, Humanism, and Progress. As Pinker points out, the metrics for infant mortality, life expectancy, literacy, and overall wealth have shown steady gains. So we humans still have our eleemosynary mojo.

Ironically it’s in fire-ravaged California that Apollo-level breakthroughs in firefighting have been routine—albeit only in certain sectors. Silicon Valley techsters are building companies that will soon enough be denominated in the trillions of dollars. Of course, the wealth is ill-distributed, clustered mostly in the Bay Area. And the technology is even more ill-distributed: as we have all observed, urban financiers and consumers have an infinity of apps for their enrichment and amusement, and yet the benefits of this technology haven’t been extended to social problems, including, as we have seen, firefighting.

This is a problem of the public sector far more than the private sector. That is, geeks and entrepreneurs will inevitably do their geeky and entrepreneurial thing without much regard to larger social concerns—that’s the nature of who they are.

It’s the public sector that’s supposed to address national problems, utilizing, as needed, the wealth and knowhow of the private sector. So we hire government officials to figure out how to ensure domestic tranquility and promote the general welfare. That’s the obvious division of labor: capitalism provides the dynamism, and government does the taxing, regulating, and incentivizing.

This model can work—and work well. Once upon a time, California was the envy of the nation: its government established policies that helped make life synonymous with the American dream.

Yet today, it’s hard to think of a state that’s governed worse. One indicator of just how wrong things have gone is the fact that, adjusted for the cost of living, California now has the highest poverty rate in the nation.

It might seem strange that such a deep-blue state would allow regressive poverty to fester, and yet, upon examination, we see that the “progressives” who rule California are distinctly reactionary. That is, they aren’t much interested in old-line Left issues such as worker solidarity; instead, they are focused on multiculturalism and environmentalism, which, of course, hearken back to pre-modern ideals of ethnicity and rusticity.

For instance, it’s hard to get much more reactionary than the Middle Ages, and yet that’s the model inside the head of California’s four-term governor, Jerry Brown. In Sacramento off and on since the 1970s, Brown has done nothing about fires, except, of course, to pay for firefighting. Instead, his focus of late has been on building a monument to himself, namely a high-speed railway between San Francisco and Los Angeles. Such a HSR might be a good idea, in terms of Alexander Hamilton-ish infrastructure building, were it not for the cost—estimated at $100 billion—and the fact that few people seem destined to ride it.

Yet Brown has his own non-Hamiltonian rationale. When asked about the viability of HSR in 2012, the onetime Catholic seminarian answered with a question: “How did the peasants of medieval France afford to build the cathedral of Chartres? They did it slowly…they did it with community investment and a great belief in the future.” If we cut through the liberal language of “community investment”—and skip past the specifics of how peasants were induced to work on cathedral construction—we can see that in Brown’s mind, the value of HSR is some sort of secularized spirituality.

So if it’s immortalizing transcendence that transfixes Brown, then it’s little wonder that he doesn’t have much bandwidth left to worry about mere wildfires.

Of course, that still begs the question of why other Californians are also passive in the face of this ongoing costly crisis of combustion. One hypothesis is that green Democrats are quietly happy with the fiery status quo. After all, the fires are chasing people out of rural areas—maybe even for good.

Moreover, the larger mission of the greens is to link the fires to “climate change.” So in that sense, the fires are “useful” insofar as they underscore the case for carbon action. This July 30 headline in The Washington Post provides the correct spin: “How climate change is making disasters like the Carr Fire more likely.”

To be sure, such smug complacency in the face of disaster would seem to provide an opportunity for those who aren’t smug and complacent. Most obviously, California Republicans, decimated as they are, have no reason to be either smug or complacent. Perhaps they could take the lead in suggesting new firefighting technologies (as suggested here at TAC back in 2013), utilizing desalinated water from the nearby Pacific Ocean (as suggested back in 2012).

Or, alternatively, the Golden State GOP could decide that it is happy campaigning—and losing—the same old way. After all, as the Middle Ages proved, ingrained habits of mind, no matter how enervating and impoverishing, can persist for a long time.

Still, even as California bows under the dead-handed weight of hardened orthodoxy, there are at least some signs that new reformist thinking is breaking through. For instance, a Silicon Valley company, Anduril, is working on tank-like autonomous firefighting robots. Interestingly, Anduril was founded by one Palmer Luckey, a rogue Republican in the Valley.

If Luckey is able—or perhaps, we should say, is allowed—to build innovative technology for the benefit of ordinary people, then who knows what other cultural and political transformations could come? After all, the Middle Ages didn’t last forever.