Scaramucci on Trump’s crowd jeering Jim Acosta: This is not who we are 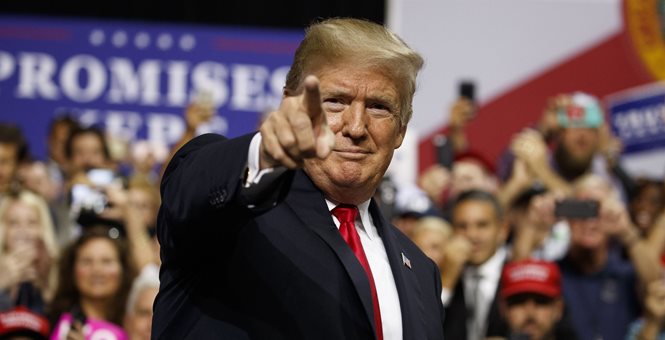 It is who we are, by definition. In fact, hooting at Acosta wasn’t even the worst “this is who we are” moment from last night’s rally. All over the arena, people where wearing shirts or carrying signs about QAnon, for cripes sake.

When Trump eventually tweets about Q, and he will, is Scaramucci going to do his “not who we are” shtick for that too?

You bought this ticket, Mooch. In fact, you helped sell tickets to this show in 2016. Enjoy the ride.

This isn’t our best. It’s not who we are. I don’t always agree and am often upset with journalists but we are flashing warning lights now that we shouldn’t be flashing. The free press needs to be protected as well as their opinions. That’s why that Amendment was First. https://t.co/6QQhPzK78n

If you don’t want to click through his tweet to the clip Acosta posted, here it is embedded below — the CNN’s-eye-view of the crowd. I see a QAnon sign and one mentioning Seth Rich in the first clip. What, nothing about vaccinations?

Just a sample of the sad scene we faced at the Trump rally in Tampa. I’m very worried that the hostility whipped up by Trump and some in conservative media will result in somebody getting hurt. We should not treat our fellow Americans this way. The press is not the enemy. pic.twitter.com/IhSRw5Ui3R

Another snapshot from Trump’s Tampa rally, I tried to take a picture with a father and his daughter while people yelled “CNN sucks” in my face. I am sorry that this little girl had to see that. pic.twitter.com/DIHPpCdbb6

Seems like a dangerous atmosphere! But it wasn’t, really. My read last night on Acosta’s live shot was that it looked more like a pro wrestling event where the bad guy struts out to ritual booing than a legit angry mob. That is, the crowd dislikes the villain on some level, but on another level they realize he’s playing his part and making “the show” fun. My 10-year-old self would have booed Nikolai Volkoff at a WWF match but I might have tried to get an autograph from him too. And in fact:

Trump supporters can boo and say forever that they hate CNN and @acosta but after the cameras are off, all I see is them asking his opinion on everything under the sun and if they can take pictures with him. It's quite a phenomenon. And he handles it like a pro.

It was great chatting with all the Trump supporters in Tampa tonight. I took more questions from them than the president has taken from the press lately.

At the end of the day, Volkoff was a celebrity with a role in my imagination. Of course I’d want to chat with him. Same here with Trumpers and Acosta. Even Trump, for all of his attacks on the media, felt weirdly obliged a few weeks ago to note in a tweet after one of his dust-ups with Acosta that he’s a “nice guy.” That reminded me of pro wrestling too, reading as an adult about how the “faces” and “heels” were buddies away from the arena. None of that excuses the anti-media demagoguery that has Scaramucci worried, which is reckless and will come back to haunt Trump when some fan eventually takes “the show” too seriously. But you get the sense from Trump himself that he’d be fine having dinner and shooting the bull with most of his media antagonists, Acosta included.

Speaking from personal experience, Ben Shapiro reminds the left that it’s not just the right that indulges mobs more than they should:

CNN held a full scale gun control rally complete with shaming rituals directed against the NRA and Rubio just a few months ago. They used airtime to let David Hogg slander 2A supporters as callous accessories to murder. But history began today.

Assorted liberals were sputtering last night on social media after Trump’s rally that you’d never see mass hostility like this at a left-wing event, which had righties reaching for examples ranging from Paul Wellstone’s memorial service to the examples Shapiro gives about modern forms of intimidating left-wing behavior. All true, especially the shooting of Steve Scalise and other Republican congressmen, which would have been a months-long story about “climates of hate” if Democrats had been targeted but ended up as a frightening three-day curio in the press last year. Dems would counter (and have on Twitter), though, that we’re not talking about fringe elements here. We’re talking about the crowd at a rally led by the president of the United States, echoing his own oft-repeated message that a certain industry is an “enemy of the people.” Scaramucci’s looking down the road to where that might lead. Maybe he should call Trump up and let him know. See if he cares.