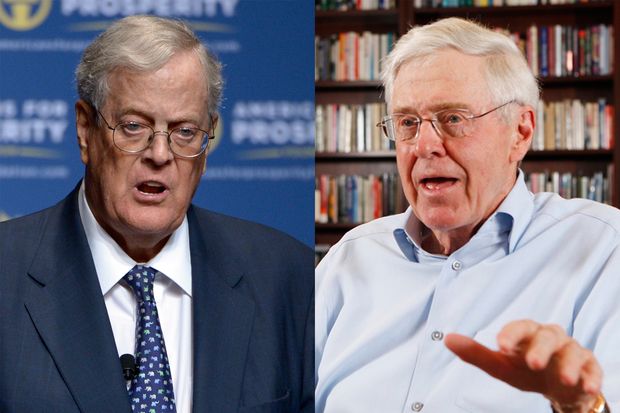 is his fast friend, President Trump has decided to pick a fight with some truly nefarious operators—the successful American businessmen and political donors Charles and

At least Mr. Trump and MSNBC now have something in common.

Mr. Trump tweeted Tuesday that the two free-market evangelists “have become a total joke in real Republican circles, are against Strong Borders and Powerful Trade. I never sought their support because I don’t need their money or bad ideas.” The President’s former and once-again political strategist

Congratulations to the Kochs. They’re receiving such thermonuclear attention because they’ve decided not to bow to Mr. Trump on trade, immigration and other issues that the brothers and their political network count as crucial to economic liberty. Unlike many Republican candidates for office, they can afford to take a position independent of Mr. Trump. And they have the money and passion to have some influence. This is good for the country and the Republican Party.

Mr. Trump overreacted as ever to reports of what can only be described as the mildest criticism from

at a weekend gathering of Koch allies and operatives in Colorado. (David Koch recently retired.) Some on the scene criticized Mr. Trump’s trade agenda, although Charles Koch noted that the “divisiveness” coming from Washington began “long before Trump became President.”

Mr. Trump may also still be sore that the Koch network was neutral in the 2016 presidential campaign, though it did help elect GOP majorities in the House and Senate. But he and Mr. Bannon seem especially peeved that this year these donors aren’t supporting Republicans who have turned protectionist on trade and nativist on immigration, or who support more government spending.

In particular, they’ve been reluctant to support

who is running as a free trader opposed to the Trump tariffs that have punished the Farm Belt. They’re also cool on

a Trumpian Republican running for Senate in Pennsylvania.

Mr. Trump wants to remake the GOP in his policy image, and he’s having considerable success in primaries. The GOP rank-and-file like what Mr. Trump has accomplished, and so his tweets and endorsements carry weight.

The problem comes in general elections when some of those Trumpian candidates have lost among a larger electorate. Recall that

is a likely loser in Virginia in November. We’ll see how well the Bannon strategy of making the election a referendum on Donald Trump works this year.

As for those “bad ideas” the Kochs have, they’re the reason for whatever governing success Mr. Trump has had so far. Pro-growth cuts in tax rates, deregulation and originalist judges have been the most successful parts of the Trump agenda. And they were Koch beliefs when Mr. Trump was still donating to Bill and

The President gets credit for winning the election and making the policies happen, but the Kochs also gave his agenda major support over the last two years.

Contrast that success to Mr. Trump’s immigration agenda, which has gone nowhere in Congress; his ill-thought border enforcement that ended up in the debacle of family separation; and the tariff assault that has so far raised costs for U.S. consumers and producers without any compensating trade opening. Whose ideas are the “bad” ones?

The GOP coalition is big and fractious, and it needs a robust debate unless it wants to become small and monolithic. The GOP has been a free-trade party for decades because trade has promoted prosperity for the most people most of the time. Pro-trade stalwarts shouldn’t roll over simply because Mr. Trump has resurrected some economic nostrums from the Hoover Presidency.

Republicans who disagree with Mr. Trump need the donor and political support to do so. And the Kochs and other donors are right not to reflexively endorse Republicans who think they can trash pro-growth economic policies and still count on donations from the success of those policies.

As for Mr. Trump, he ought to understand his real political opponents aren’t the Kochs. They’re the Democrats who claim to support him on trade but are aching to impeach him.