The Return of the Big Men to a Washington Institution 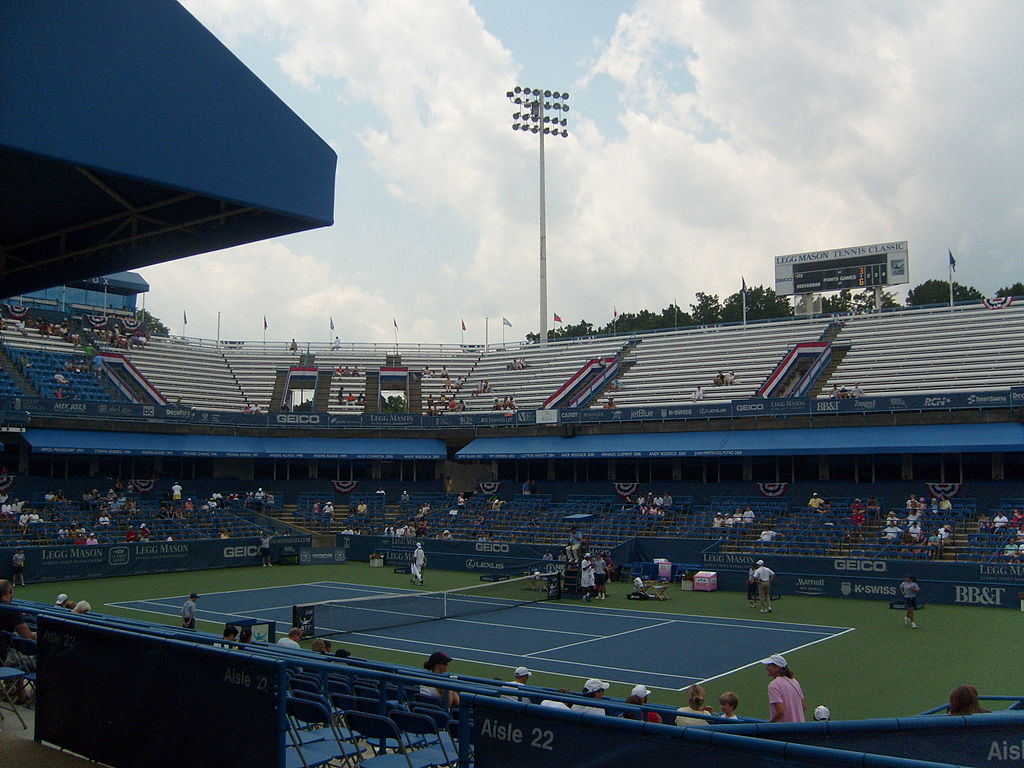 Despite a spectacular display of talent, Mackenzie McDonald was unable to fluster three-time Grand Slam winner Andy Murray, who rallied from a set down to prevail in the wee hours and advance to the second round at Washington’s legendary summer tennis tournament. But you have to give credit to the UCLA tennis alum and Division I superstar, his stand against the great (six-three) Scot, who is coming back from serious injuries and hip surgery, was an anthology piece.

At 5-4 in the third, the polar opposites — McDonald the charge of the light brigade, Murray the strategic bomber — returned to deuce so many times it seemed certain whoever finally converted would have the mental momentum to close out the set and the match. Again and again, Murray got an ad — five match points — by launching a huge serve on his preferred side, then blew it as McDonald took control of the point with a two-fisted backhand return of serve followed by shrewd placement. He hits hard and fast, fearlessly attacks the net, but he has a stunningly soft drop shot when it works. He netted quite a few volleys from the net, admittedly, but he keeps at it. He has the guts, soon enough he will have the glory.

When the young (23), small (five-ten) northern Californian finally converted an ad-out, it looked like the exhausted, grumbling, at times even limping Murray (who is 31) was done, but no. You are not Glasgow born for naught. After that nearly quarter-hour classic — a game late in a third set normally lasts about four minutes — he broke back swiftly and served it out for the match.

It was a great match, auguring well for both men, tense and hot and exciting the way they love it at Rock Creek Park by 16th St. near the Maryland line, rich in the lore and legend of half a century of open tennis. Older fans remember it as the Legg Mason Classic, perchance the Washington Star International, harking back to the days when newspapers were newspapers and newsmen knew their jobs. It was less comfortable then, no great beautiful stadium with pissoirs and expensive fast food stands, fashionable boutiques, hawk-eye equipment on the courts. It was fun though, and it was a place where tennis-playing secret operatives from the swamp downtown, passing through on the way to another mission to the far frontiers of freedom, shared pocket flasks with private bankers and lawyers while appreciating the likes of Thomaz Koch and Cliff Richey, Ken Rosewall and Tony Roche, names lost in the mists of all but the most devoted historians.

Thanks largely to the devotion of Donald Dell, Arthur Ashe’s friend and Davis Cup teammate and one of the pioneers of sports management, the Washington Open, currently known as the Citi Open, benefits the Washington Tennis and Education Foundation. This fine organization, one of the first of the sports-and-school charities designed to help the poor whom we always will have with us. Today they are called underserved; back in the days of the great and greatly generous William H. G. FitzGerald, a Naval veteran who was a successful Washington banker and eventually ambassador to Ireland, they were called juvenile delinquents. It was to reduce the temptations of lives of crime that FitzGerald, actually a few of his friends, he came in some years later, as did the great American champion and Army veteran Arthur Ashe, reached into their pockets and invited some young toughs to try hitting with a racket instead of brass knuckles.

The rest is history, and history, if it stays with us, keeps going. With some of Washington’s great tennis men, Willis Thomas Jr and Mike Ragland running the tennis programs at the WTEF, assisted by devoted teachers and coaches, the bounce goes on — lives of purpose (and college scholarships) and righteousness where otherwise there might be only bleakness and blight.

However nerve-wracking the Murray-McDonald match was, played through the muggish hours following a long rain delay, it was laid back compared to the one that had to be postponed till the next day, pitting another three-time Slammer, the Man himself, against a perennial Hope of American tennis. Stan Wawrinka-Donald Young went three sets and nearly four hours on the Stadium built thanks to FitzGerald’s largesse, who paid, astonishingly in Washington, D.C., with his own money.

No less than Murray-McDonald, Wawrinka-Young represent a sharp contrast in tennis styles, the phlegmatic Swiss against the emotional Illinoisan, demonstrative in words and gestures. Somewhat like Murray but more so, Wawrinka is the man of the long bomb and the powerful strokes. Again and again, he dominated points and closed them out with shots that seemed to come out of nowhere and were bouncing off the walls before anyone, least of all Young, could see them. His one-handed backhand is a stroke of legend in today’s Tour — from which he has been absent for some 18 months, requiring among other things surgery to repair a left knee gone wrong — surely the most lethal since Ken Rosewall’s and perhaps an inspiration to his better known compatriot, Roger Federer, whose own re-calibrated one-hander revolutionized his game on defense, especially his returns of the left-handed Rafa Nadal’s serves (Young too is left-handed), and greatly helped his stunning comeback these past two years.

Ah, sorry, this is all inside-baseball stuff, I mean inside tennis stuff. All you need to know is there are these two Swiss guys, Wawrinka and Federer, and they are to today’s game as Rod Laver and Ken Rosewall were to another era’s, or Roy Emerson and Lew Hoad to the earlier, overlapping one, or Andre Agassi and Pete Sampras, or — but you know what I mean. Tinker to Evers to Chance and all that — and, when you think about it, it matters. Sports may be one of the last redoubts of historical memory. If we, as a society, forget our history, we are doomed.

Which is one of the more reassuring aspects of this tournament. On the benches of this stadium, deservedly known as one of the most intelligently designed in the world, with visibility excellent from every single seat in the house, if you ask anyone who was William H. G. FitzGerald, the chances are high they will know more about him than you. This rule of thumb, note, does not apply to the press box, but that is par for the media. Observe too that said box is named for Charlie Brotman, and most journalists cannot name the legendary Washington PR man and announcer, snubbed at the last presidential inauguration despite having called every one of ’em since Ike. But then maybe who knows — it was a way for the new prez to say he was breaking with some of the old rules in this town, rules that seemingly are not working and, like our chronic arrogance, risk leading us to our doom.

But that is neither here nor there. In tennis, Donald Young has as much a chance against Stan Wawrinka as Borna Coric has against Roger Federer. But the Swiss-South African (on his maternal side) maestro was beaten by the young Croatian dynamo at Halle a few months ago, as he would be beaten a few weeks later at Wimbledon by the not-so-young South African Ken Anderson, and Young, who has a history of melting down in the stretch after gorgeously athletic starts, dug his sneakers in and withstood the bombs.

The Stan bomb — it is a thing to behold. Not only is it as powerful as one of Juan-Martin del Potro’s, it is the most accurate in the sport. I have not verified this scientifically, you understand, but from observation it is difficult to name a shotmaker who so consistently hits down the liners from either wing — but especially with that sweeping backhand — that nick the sidelines and the baselines. If, unbelieving your own 20-20, you resort to the hawk-eye challenge, you expend your three-per set in no time at all, so in fact most people do not challenge Stan-the-Man’s hairline winners.

The remarkable thing was, however, that Donald Young did not need to. Frustrated as he was by his own mistakes and the bombardment of impossible-to-reach shots from the Swiss star, he was fantastic on service. And Wawrinka, for some reason known only to the mental specialists, was simply unable, over three sets and who knows how many hours, to reverse the dynamic when receiving. There were no breaks. It was as if two different matches were taking place, depending on who was on serve.

As usual, Young double faulted often — he doubled twice, almost unheard of, in the second set tie break, erred on the following point to lose the lead for the first time in the set, which Wawrinka then closed out. Yet over the time of the match, his service game was steady and Wawrinka’s return game was awful. His surgical placements, his masterful control of pace, evaporated when he was on defense, because Young was solid on offense. Stan was shanking and hitting wildly long as Young maintained the pressure. He made only three points in the third set tiebreak and shanked the last point on, of all things, a backhand.

The show goes on. If it gets too exciting, you can take a break and watch the tiny kids playing nearby in the Next-Champs tournament organized by WTEF and other tennis schools. They are wonderful. They are the future.