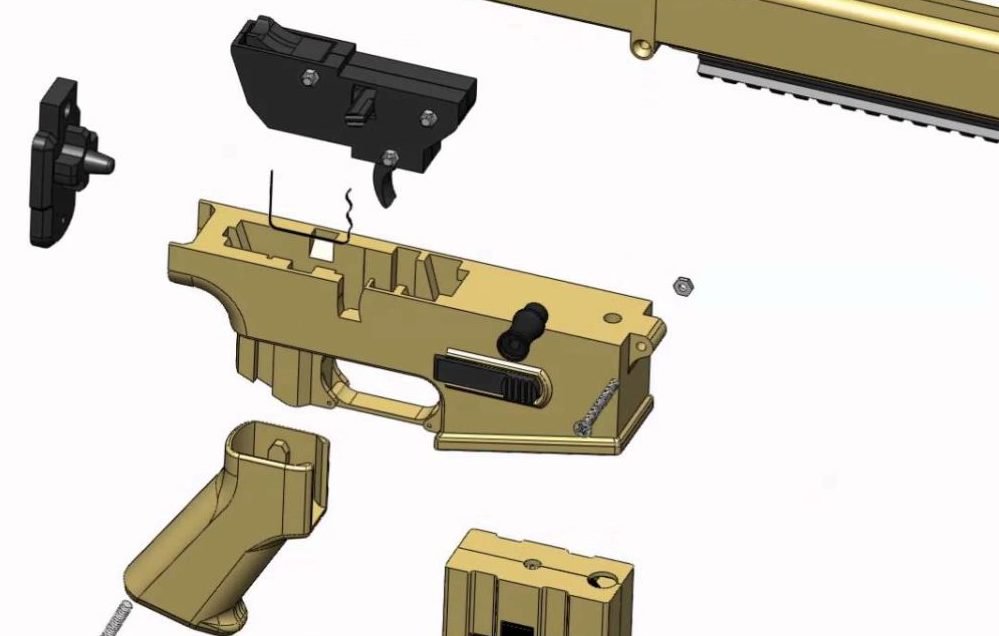 August 1 was set to be the day the government finally gave up its three-year battle against Defense Distributed (DefDist) and the First Amendment. That what would have been the case were it not for a partisan group of state attorneys general and U.S. District Judge Robert Lasnik.

Before we get to Judge Lasnik’s order and how wrong it is, some background is in order.

In 2013, Defense Distributed published files to print their “liberator” pistol—named after the pistol dropped by US bombers to resistants in Nazi-occupied Europe—on its website, DefCad.org. DefCad served as a repository of weapons related files of various types. The website hosted everything from literal blueprints, to Computer Aided Design (CAD) files, to StereoLitho (STL) and Wavefront (OBJ) files useful in 3D printing.

Two years later, the State Department forced DefDist to remove all weapons-related files from its website under a tortured interpretation of an obscure cold war-era law concerning the export of “defense articles.” DefDist sued, arguing that this interpretation worked an unconstitutional prior restraint on speech. After a long battle over a preliminary injunction—which Cato supported with an amicus brief—the Department of Justice decided to settle, paying DefDist’s legal fees and waiving its prior restraint order. As part of the settlement, the government would clarify that the United States Munitions List (USML) did not prevent the distribution of digital blueprints, and issue a letter to defendants advising that the files at issue are approved for distribution. This was to take effect August 1.

On July 30, nine state attorneys general filed a lawsuit against the State Department seeking to block the settlement. The scattershot suit raised all manner of issues, including persistently conflating downloading files with the actual production of illegal “undetectable” firearms. It alleged that the government—in settling with DefDist after having clearly violated their First Amendment—failed to follow protocol in their “modification” of the USML.

The attorneys general filed an emergency motion for a temporary restraining order (TRO)—an extreme legal mechanism reserved for cases showing a likelihood of irreparable harm—barring the government from moving forward with the settlement. Even though the files at issue have been easily available on the internet for years, Judge Lasnik still found that the plaintiffs proved that “irreparable harm” would follow in the absence of the TRO.

In support of this ruling, Judge Lasnik wrote that “[a] side effect of the USML has been to make it more difficult to locate and download instructions for the manufacture of plastic firearms. If an injunction is not issued…the proliferation of these firearms will have many of the negative impacts on a state level that the federal government once feared.”

To say the least, that conclusion is rife with problems.

For one thing, the USML never actually covered the drawings DefDist sought to make available. The language at issue, cited by the court, includes in “defense articles” information “required for the design, development, [and] production” of firearms. This incredibly broad language, which also includes information on the “maintenance and repair” of firearms, might reasonably be read to include blueprints. It might also reasonably be read to include owners manuals and boy scout handbooks—except it doesn’t. In a later section, the statute specifically exempts all information “in the public domain.” Which includes all information available to the public through “public release in any form.”

This gets to the next point about gun blueprints: they are nothing more than information. Judge Lasnik, and the attorneys general before him, has proved unable to sever the concept of a gun’s blueprint from the gun itself. Compare this to our treatment of patents, which require enough information to be disclosed to enable the common mechanic to use the device without undue experimentation. There are thousands upon thousands of weapon-related patents in the public record, with detailed descriptions on their use and function. Would the attorneys general here find the government’s centuries old practice of publicizing gun patent disclosures to cause “irreparable harm” because someone might use the information to build an illegal gun? We should think not, but in the Ninth Circuit, one can never be too sure.

To put it another way, if any readers are fans of “Breaking Bad,” you might be pleased to know that publishing or downloading Walter White’s meth recipe—were it a real thing—would be fully protected by the First Amendment, even if following the recipe to create the Blue Sky product would land you in the pokey.

The order’s obsession with “undetectable guns” is particularly ludicrous. For one, there is no claim that any of the files actually presents a firearm that would be “undetectable” if built according to instructions. The order instead speaks of designs that can be “modified” to be undetectable. There could be no crime in disseminating information that might be “modified” to help do something illegal. If we follow this logic, the sentence “cut barrel aft of sixteen inches” would be similarly regulable if applied to a shotgun. Sawn-off shotguns are illegal, but standard shotguns and hacksaws are not. The crime occurs when the illegal act of sawing the barrel is committed, not before.

What Judge Lasnik misses is that the government cannot censor a design alone—at least not while abiding by the Constitution.