Are you ready for President Marianne Williamson? 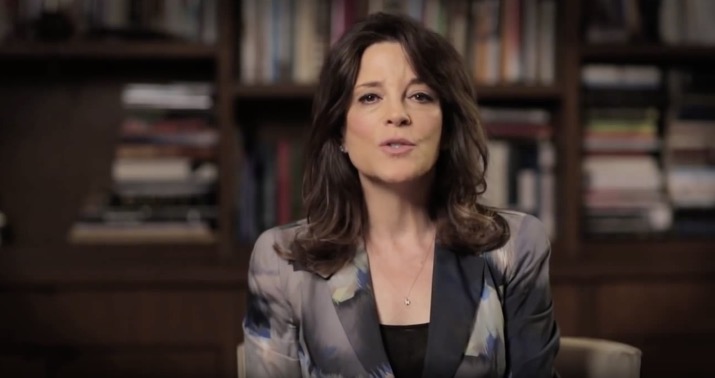 I can’t believe I’m writing this but it’s true: There may well be more candidates onstage at the first Democratic primary debate in 2020 than there were at the first Republican one in 2016. Count ’em up. Definitely running: Warren, Gillibrand, Harris, Booker. Definitely thinking about it and would be formidable if they did: Bernie, Biden, maybe Amy Klobuchar. Making noise about it and might do it, if only to land in VP contention: Eric Holder, Tim Ryan. Rich enough to do it and figuring “why the hell not?”: Mike Bloomberg, Howard Schultz. Celebrities with a following who might do it on a lark: Michael Avenatti and now, I guess, Marianne Williamson. That’s 13 right there and we’re not at the midterms yet. And if the GOP gets walloped in November and Trump’s job approval declines next year, making him extremely vulnerable in 2020, lord only knows how many others will be enticed into the race.

In years past you could have discounted Avenatti and Williamson as nothing more than famous people looking for cheap buzz by flirting publicly with a presidential run despite having no real intention of doing it. That’s where we’d be if Republicans had sent Trump down to ignominious defeat in the 2016 primaries.

But they didn’t, did they? Every celebrity in America right now believes that not only do they have a chance of winning their party’s nomination, they’re qualified to have it. If the guy from “The Apprentice” is qualified to control the nuclear arsenal, everyone’s qualified.

One other reason not to doubt Williamson’s intentions: She’s run for office before. She jumped into the jungle primary in the 2014 House race for Henry Waxman’s seat in California. She blew $2 million on the race and got a little more than 14,000 votes, good for fourth place. Actual quote given to the Times during her campaign: “When you’ve written 10 books and have six on the New York Times best-seller list — and four have been No. 1 — I think you have a right to be a member of Congress.” (Fact check: You do not.) Now she’s thinking bigger, if the Guardian is to be believed. And why not? Post-Trump, American politics has indeed entered a new age:

One source said Williamson took meetings in the Des Moines area and also in Fairfield, Iowa, a rural town that is home to the Maharishi University of Management and has a thriving community of practitioners of transcendental mediation.

Williamson’s interest in a potential presidential bid is a sign of how broad the Democratic field in 2020 might be. Dozens of Democrats have been mooted as candidates and Williamson would have competition even for the “yoga vote”. Ohio congressman Tim Ryan has reportedly said that he is hoping to court that demographic if he mounts a bid.

She’s merely “looking into it,” according to a Democratic activist, but you can imagine her reasoning. It’s not just an “if Trump can do it, I can do it” thing. She’s probably digested the many polls this year showing that Oprah Winfrey would be a credible, even formidable candidate thanks to her new-age message of love and self-actualization. That’s Williamson’s message too. She’s not Oprah-famous but she’s very famous, with plenty of very famous — and very wealthy — friends who’d be willing to cut her checks to fund a run. If Oprah’s not going to fill the Oprah niche, Williamson might try.

I bet she’ll get a lot of encouragement too from political consultants. A political newbie with access to big money is a consultant’s dream. The people who worked on here failed congressional run evidently did quite well for themselves financially for piling up those 14,000 votes. All sorts of liberal political pros will be eager for her business and pushing her to run to get the gravy train going. Why not? Even if she loses, and she will, a respectable showing might make her support worth something to the nominee. And that might mean a job in the new administration, if that’s what she’s after.

To give you a taste of what she’d be like as a candidate, here’s a video from her 2014 congressional run. Her message, in three words: Drain the swamp.