Democrat to conservative Never Trumpers: Your only rational move is to join us — permanently

“[T]he Democratic Party will not feel terribly cozy,” concedes Bill Scher in making his pitch to anti-Trump righties. “You would often be fighting uphill, and you would lose more than you would win.” Frustration *and* futility? Take my money.

How silly of him to invite Never Trumpers into a party where they’ll be personally disdained and derided, their political principles sneered at, their character questioned, their, uhhhhhh … come to think of it, that’s exactly what the GOP is like now too.

Ah well. Scher is right that conservative anti-Trumpers would lose much more often as Democrats than they would win, certainly more often they would lose as Republicans. (Two words: Gorsuch, Kavanaugh.) That alone should quash any argument for a permanent alliance. The case for voting Democrat this fall — which I don’t agree with — is strongest when framed as a short-term temporary corrective, a rebuke to Trump and a vote for meaningful oversight in Congress. Beyond that, what would any right-winger gain from allying with Democrats? A little extra leverage in getting President Warren to compromise on a 50 percent marginal income tax rate instead of a 60 percent one?

[T]he best way to move the Democratic Party rightward would be for more conservatives to join it. It’s true that socialist-friendly Berniecrats are increasingly vocal in the Democratic Party, but conservatives should also recognize the ideological breadth of what is the nation’s only remaining big-tent party. Democrats are held together by a belief in active government to solve problems and a commitment to equal rights and opportunities for women and minorities. But questions over foreign policy and trade have long been points of internal debate, and that makes them policy areas where new party members can play a significant role…

So once conservatives free themselves from the Fox News echo chamber, it would be easier to conduct good faith, fact-based negotiations over policy specifics, such as how to tackle climate change through a revenue-neutral carbon tax, which some conservatives already support. Instead of barreling toward single-payer health insurance, conservatives could work with their new Democratic friends on tidying up what was once known as RomneyCare. Pro-life and pro-choice forces could finally team up on sex education and contraception access to reduce unwanted pregnancies.

Which, again, come to think of it, is pretty much what we have now. Hmmm.

Scher does concede, though, that his pitch isn’t aimed at everyone. He’s looking for a particular type of right-winger here:

If you are a Republican because you oppose abortion in all circumstances and love conservative judges and tax cuts, then becoming a Democrat doesn’t make any sense. But if you are primarily horrified at how Trump is undermining the existing international political and economic order—hugging Russia, lauding strongmen, sparking protectionist trade wars—then becoming a Democrat is your best option.

That’s a fair point. Different people are Republicans for different reasons. If you’re culturally conservative, there’s obviously no home for you in a party that supports abortion on demand, open borders, and gun-grabbing. I mean, really: 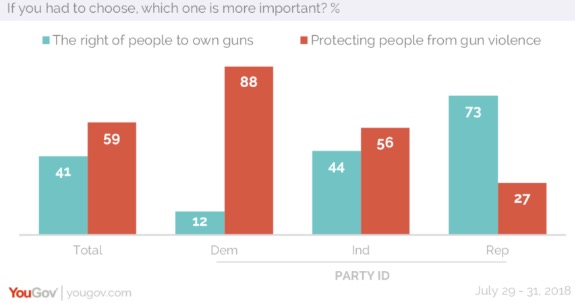 If it’s not cultural affinity that binds you to the GOP, though, but rather traditional Republican support for free trade and McCain-esque interventionism abroad, you could argue that Democrats are more of a natural home for you right now than the GOP is. Various polls over the last decade or so have showed Democratic voters more supportive of free trade than Republicans are; both the liberal base’s turn towards free markets and the GOP base’s turn towards protectionism pre-date Trump. (Both shifts are probably fallout from NAFTA.) The Democratic turn towards hawkishness is less stable — remember the Iraq war? — but their grudge against Russia from 2016 might have legs. The question for Scher and others is why any righty should believe that neoliberals will be able to hold the line against the ascendant socialist wing that’s apt to steer the Democrats in the same direction on trade and isolationist foreign policy as Trump’s headed. You can fantasize all day about a cavalry of conservative Never Trumpers joining the party and anchoring it to the center before the Berniebros take over, but as any Trump fan would eagerly tell you, there just aren’t that many Never Trumpers on the right out there.

And even if there were, and even if Scher’s plan succeeded, would that be a net electoral gain for the Democratic Party? How many socialists, believing their political star was rising after Hillary, would walk away from the party in disgust if an influx of right-wingers suddenly tugged it back to the center? Clinton’s 2016 failure is supposed to be the ashes from which the Democratic-socialist phoenix rises. I doubt there are enough Dem-curious right-wingers in the U.S. to replace all the far-leftists who would bail out if the party turned a bit right. If there were, wouldn’t Hillary herself have made more of an effort to appeal to those voters than she did two years ago? Any Republican Never Trumper would remind him that Team Clinton’s outreach to the center-right was precisely zero.

In the end, this line from Scher might be a useful litmus test: Republicans “wrongly view the Democratic Party as a rotten cauldron of crass identity politics, abortion on demand and government run amok.” Do you believe there’s a chance that he’s right, that that view is wrong? If so, you might consider his invitation. If not then there isn’t much to talk about.