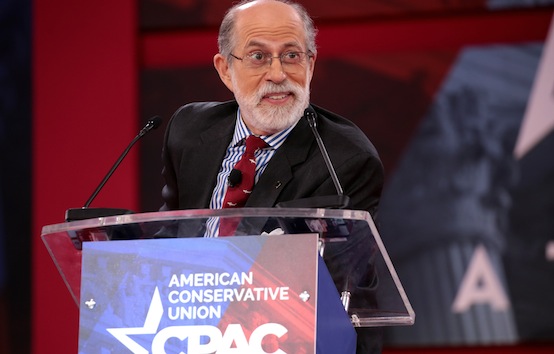 The spring of 2016 in Washington, D.C. was unusually warm, as I remember, perhaps foreshadowing the raucous year yet to come. One night a group of journalists and policy hands gathered at the Dupont Circle bar Rebellion to commiserate. No one knew it yet but it was the closing moment in Act One of the Trump revolution; our 21st-century P.T. Barnum was well on his way from presidential impossibility to presumptive nominee. Yet no one was talking about Trump. That evening, perhaps bespeaking of both the sleeplessness and sexlessness of those gathered, the conversation focused on a new addition to Senator Ted Cruz’s national security team: Frank Gaffney, the former Reagan hand and uber-foreign policy hawk.

Back in 2016, Cruz—capable, erudite, and reviled—was positioning himself as the last great hope of movement conservatism. The only candidate who could still plausibly defeat Trump, or individually force a convention brawl, Cruz wanted to convert his early primary brand—a kind of diluted libertarianism mixed with cultural evangelicalism—into something more conventionally Republican. Gone was the poaching of the platforms of Rand Paul and Ben Carson, and in was Lindsey Graham who had previously called the junior Texas senator “demonic.”

“This is what we’re supposed to oppose Trump with? The paragon of reason, Frank Gaffney?” intoned one policy veteran sympathetic to a restrained foreign policy and, correspondingly, to Paul, who had only recently dropped out of the race. In truth, Cruz was simply trying to replicate a trick mastered by Trump—a sort of Heisenberg Uncertainty machination of modern conservative politics—occupying, at the same time, the least and most hawkish spaces on the political field. For every enthrallingly refreshing “Iraq was a big fat mistake” from candidate Trump, there was “we’re going to bomb the s**t out of ISIS” and promises to restart the torture program of the Bush years.

Gaffney’s recent career, now re-ascendent in Trump’s orbit, is perhaps most emblematic of that conflict of vision.

When you talk to Gaffney, as I did in his Washington offices at the Center for Security Policy in August of 2017, you get the sense that he and his allies think that the September 11 attacks are now almost a distraction. For the hardcore—and this includes some principals at more mainstream outfits such as the Foundation for the Defense of Democracies (FDD)—the true, largely unencumbered villain in America’s war on terror is either—pick your poison—the Muslim Brotherhood or Hezbollah. For Gaffney, and his life’s work stands as testament to this, it’s decidedly the former. Anxieties about the alleged power of the the Muslim Brotherhood are rife in the publications put out by his Center for Security Policy. This often lapses into matters more sinister and conspiratorial: the enemy within, and the enemy itself. His center’s books—and he readily gave me more than 10—have titles such as Star Spangled Sharia and Bridge-Building to Nowhere: The Catholic Church’s Case Study in Interfaith Delusion. The texts allege elaborate financial and political influence maneuvers by Muslim agents, most concerningly the Brotherhood. Gaffney even intimated to me, before backtracking, that Congressman Keith Ellison, the first Muslim elected to Congress, could be a Brother, or at least compromised by the Brotherhood.

“The assertion that the dangers that we’re facing, most obviously post-9/11, have nothing to do with Islam and [that] the people who are fighting us with terrorism or in Afghanistan or Iraq or elsewhere, are actually hijacking a great Abrahamic faith and a religion of peace and all of that, is simply uninformed,” Gaffney told me. “What the authorities of Islam call sharia, has, at its core, our destruction.” He added that adherents to sharia “are obliged to engage in jihad, of one kind or another, to impose it on everybody else.”

Yet Gaffney, in the seventh month of the presidency of the man who once told CNN “I think Islam hates us,” seemed lukewarm at best over Donald Trump.

The week I met with him came just after the largest bloodletting of the administration: the rapid-fire ousters of key figures who had been with Trump during the campaign—Reince Priebus, Sean Spicer, Anthony Scaramucci, and Stephen K. Bannon. From where Gaffney was sitting, the White House inner circle was now a mishmash of the kind of conventional Republicans—James Mattis, Rex Tillerson, H.R. McMaster, and John Kelly—who, as Peter Beinart reported in The Atlantic, had long “treated…Gaffney as a pariah.” The so-called axis of adults was unlikely to prioritize fighting for the embattled travel ban in the courts, or pursuing regime change in Iran or Qatar—“the ATM of the Muslim Brotherhood,” as Jonathan Schanzer of FDD put it in a phone conversation with me.

Since that discussion, however, Gaffneyism has experienced a clear uptick in fortunes.

Gaffney’s relevance stems from his relationship with Trump’s national security advisor, John Bolton, as well as the chief of staff of Bolton’s National Security Council, Fred Fleitz. Fleitz has worked as chief for both men. As I detailed in the Spectator USA, Bolton was eventually able to leverage his media appearances into one of the most senior positions in the government. (Gaffney is also a fellow, though not parallel, traveler of Bannon’s.)

Both the genius and the secret of the modern anti-establishment right is, like Trump, its ability to occupy two places at once. Bannon’s former outlet Breitbart News, where Gaffney is a regular radio guest (as was Bolton previously), is proof positive. Breitbart has staunchly defended most actions of the Netanyahu government in Israel while condemning the Pentagon for its support of the Saudi-led coalition in Yemen. On foreign policy, the Trump coalition is a tenuous alliance between some of the GOP’s least interventionist voices, Rand Paul as well as Bannon on most issues, and some of its most interventionist voices, like Gaffney and Bolton.

But there is one area where the hawks in this arrangement have prevailed: cutting Iran down to size.

In fact, it hasn’t been much of a fight: Trump leaving the Iran nuclear deal in some fashion was never really in doubt. As I reported last fall, at one point, the fight inside Trump circles was essentially between two plans to exit the deal as written during the Obama years: Bolton, Bannon, and Gaffney’s plan versus the more restrained architecture favored by the FDD.

Gaffney didn’t get full sway over that decision, but he didn’t have to.

His biggest victory was the president’s selection of Bolton. While Bolton himself campaigned to get the job at this year’s Conservative Political Action Conference (CPAC), it was Gaffney who was most direct: “You know, everybody says it’s great to be back at CPAC, but nobody means it like I do,” he said, declaring, “The president of the United States must fire H.R. McMaster and hire John Bolton!” Years back, Gaffney had denounced CPAC’s organizing body, the American Conservative Union (ACU), for its support of Suhail Khan, a Muslim former Bush administration official he accused of being an agent of the Brotherhood. The dispute had played out prominently in the national news.

And that’s really the handle: going forward, will Gaffney’s very real policy influence be sundered by what some see as a penchant for wacky prejudice? He isn’t without real influence, and as Peter Beinart argued earlier this year, Bolton has helped rehabilitate him even further on the right. “The man has one of the best minds in D.C.,” said Raheem Kassam, who was raised Muslim and is the former editor of Breitbart London. He added, however: “Genius doesn’t come without eccentricity.”

One example is that, in conducting research for this article, two sources familiar with the matter told me of Gaffney’s history of compiling opposition research dossiers on those who fall out of his favor. One recent case involved a former member of Gaffney’s circle (a clique that includes Ginny Thomas, the wife of Supreme Court justice Clarence Thomas) who became romantically involved with a Muslim—apparently a bridge too far. And Gaffney’s flare-ups with Grover Norquist, the conservative tax policy kingmaker who married a Muslim woman in 2004, are well documented. A dossier put out by CSP and its allies on the subject reads: “The Islamists’—and their Enablers’—Assault on the Right: The Case Against Grover Norquist and Suhail Khan.”

Cracks on policy have shown. In addition to holding views on Islam that are emphatically outside the mainstream, Gaffney, doctrinaire hawkish in a way that the president is not, recently joined in on the criticism of Trump’s Helsinki summit, while his center has repeatedly urged regime change as the best course in North Korea. After Trump’s meeting with Vladimir Putin, Gaffney said Trump could be making President Obama look strong by comparison. In a published statement, he intoned: “President Trump needs now to clarify—and walk back—any mandates for institutionalizing Moscow’s agenda in ways that would make the appalling Obama-Clinton ‘reset’ with Russia seem robust.”

That’s the real question for Bolton’s NSC and this Republican Party: as Trump continues to remake American conservatism in his image, at what point, if any, does Gaffney go from lodestar to liability?

Curt Mills is the foreign affairs reporter at The National Interest, where he covers the State Department, National Security Council, and the Trump presidency.