Perfection: “Fake News” t-shirts and MAGA hats now being sold by … the Newseum 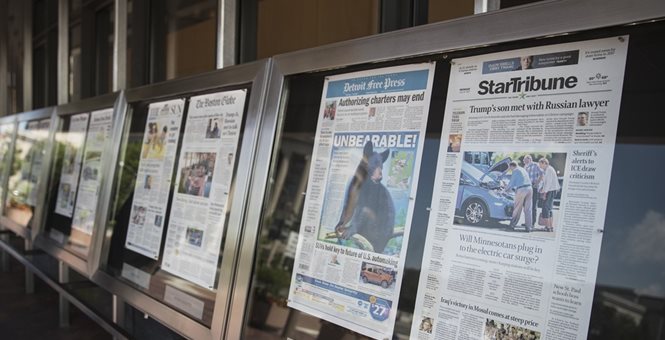 As you may know (but can guess from the name if you don’t), the Newseum is a museum in D.C. devoted to celebrating journalism.

An industry which, we’re constantly reminded, has been demagogically attacked and delegitimized by the president of the United States for political advantage. And which now finds itself under physical threat, allegedly, from that same president and his admirers.

No peace can be had with such demons.

Unless there’s a buck to be made by doing so, of course, in which case all of the supposedly principled outrage at Trump goes right down the toilet.

On its website, the interactive news museum in Washington, D.C., sells $14.99 “Make America Great Again” hats alongside American flag accessories and ties that bear the preamble to the Constitution. A T-shirt that says “You are very fake news” sells for $24.99, but it’s on sale for $19.97…

“I go to the Newseum a lot and actually saw these T-shirts previously,” [a] reporter told Poynter. “I remember commenting to my friend how inappropriate I thought it was to sell this anti-press material at a museum that celebrates our industry.

“’Fake news’ is a phrase that undercuts our profession and the hard-working journalists who practice the craft. Selling clothing that is blatantly anti-press further promotes hatred towards journalists.”

They should ask Jim Acosta to model the MAGA hat and “Fake News” shirt for them. That’d really move some units.

A spokesman for the museum told Poynter that the MAGA hat is in the gift shop because, quite frankly, it’s one of their best-selling items. I can see why. If you’re a Trump fan visiting D.C. and willing to check out journalism’s shrine to itself, how could you resist grabbing a MAGA hat in the gift shop? It’s as close as you can get to spiking the ball in the other team’s end zone.

Imagine how hard up for cash the Newseum must be to risk bad press among its admirers just to cash in on Trumpmania. Actually, you don’t need to imagine:

The Newseum says this is about championing "free speech." The more cynical read: The museum is deep in debt, strapped for cash, and tourists like these trinkets https://t.co/owVMLS3xSb

The museum’s been having money trouble for years. They opened 10 years ago at a cost of nearly half a billion(!) dollars. By 2015 they were heavily in debt. Layoffs followed, and as of February of this year they were looking for ways to sell and relocate. They’ll do anything for a buck, of necessity.

So savor it while it lasts. Not the Newseum, I mean: Savor the fact that we’ll likely never again see a metaphor for Trump/media synergy quite as perfect as the Temple of Journalism pushing MAGA swag to make bank. It’s like a physical manifestation of cable-news’s toxic romantic obsession with POTUS that began in 2015 and continues to this day. As the man himself loves to remind people, for all their criticism, his media antagonists have done very, very well profiting off of him with higher ratings and more subscriptions sold. Who can fault the Newseum for trying to get their cut?