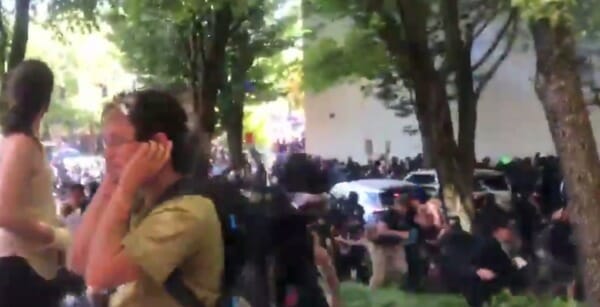 “Less than lethal now being used on left wing protesters” reports Luke Rudkowski, live from the Portland dueling protests. While it’s on his livestream, you’ll have to scroll back in the feed to see it. “It’s unclear if it was police or protesters who let off the M-80’s” says Rudkowski.

Fortunately, portland local Mike Bivins has video of it on his Twitter feed:

Far left communists of “antifa” clashed with the Trump-supporting Patriot Prayer in Portland, Oregon Saturday. Though the groups have clashed several times over the last year and a half, the August 4th edition is shaping up to be like none other, as both groups are upping the ante.

Portland police were bracing for a bloody rally and tried to prevent people from bringing guns to the event.

The rally turned bloody Saturday afternoon after a black clad Antifa thug clubbed a conservative activist with what appears to be a flag.

Police previously ordered Antifa to leave the area. Since the masked thugs refused to listen, police deployed flash grenades and explosives to get their attention.