Is Donald Trump’s Nationalism For Real? 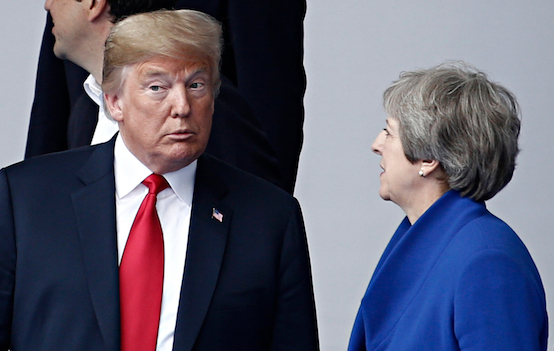 Since Donald Trump’s victory in the 2016 presidential election, many of the best arguments for Trumpian governance have focused on the president’s pet issues, while avoiding direct discussion of the man himself. The more high-minded pieces of this genre hone in on what Trump “represents” or “symbolizes”—and thereby sidestep the thorny questions of character and competence. These arguments have most frequently appeared in American Affairs, which, even when it doesn’t mention Trump explicitly, has attempted to provide his presidency with an intellectual underpinning.

Among the various contentions is that Trump either represents or has directly contributed to a revitalization of nationalist sentiment. After decades of American hegemony, international governance, liberal imperialism, and Europeanism, Trump supporters and their fellow populist movements have reminded us what it means to live in a nation-state, to be sovereign peoples with the right to self-governance. Yoram Hazony, an erudite Israeli scholar who studies the history and philosophy of nationalism, recently made similar arguments in a vigorous volley against anti-nationalism. In an article for National Review, Hazony extolled the return to nationalism ushered in by Trump: “What the vote for British independence and Trump’s election have in common is one big idea: the idea that a country isn’t just a heap of isolated atoms.”

But here we must ask a question: is the president truly a nationalist? This isn’t intended to cast doubt on how Trump feels about his own country. It is merely to inquire whether simple, overwrought displays of American symbols are enough to constitute nationalism, or whether that idea means something more. It is my contention that Trump is not a vehicle for nationalism and doesn’t represent a commitment to sovereign peoplehood. Trump is what he advertised himself to be—a businessman.

The president views the United States not as a nation among nations, but as a business among hostile corporate interests. Whether it is Mexico, Canada, or Germany, other countries are forever not giving us a good deal—in fact, they’re ripping us off. It does not matter, for example, that Canadian soldiers died on the beaches of Normandy alongside American and British soldiers in an effort to preserve the values of the United States—our relationship with Canada is about dollars and cents, not the shared bonds of two sovereign peoples. Certainly, a shared history of sacrifice does not entitle our allies to free-riding—but it does entitle them to a certain amount of respect. The Trump administration betrays its anti-nationalism not in its tariffs, but in its attitudes, which seem determined to embarrass even our close northern neighbor and its prime minister, Justin Trudeau. A nationalist would understand that the Canadian people have their own sense of sovereignty, history, dignity, and, above all, honor, and that to insult all that constitutes far more of a slight than lumber tariffs. Trump pursued this line because he lacks any knowledge of history, without which “nationalism” is cheap, flawed, and flimsy.

A more recent example of Trump’s attitude was on display during his visit to the United Kingdom last month. In First Things, Peter Hitchens, no slouch when it comes to defending England, writes that Trump’s remarks to a British newspaper insulting Prime Minister Theresa May while visiting the country she leads were a violation of the respect owed to ostensible friends. May “is the Queen’s Chief Minister, and so is entitled to some basic good manners from foreign visitors who are enjoying the British government’s hospitality,” Hitchens opines. If Trump understood nationalism as such, he would avoid insulting the honor of our friends and allies, for he would have a personal understanding of what national honor means to other peoples. He does not understand, and so he insults without care. This isn’t to say that our allies can’t be cajoled, criticized, or confronted—one must not forget that the Anglo-American relationship was not always so amiable—but merely that they are owed the respect that friends deserve.

Trump is not a cipher. He is not an enigma. Though his overbearing displays of American symbols, from the national anthem to the flag, try to tell the story of a committed nationalism, he does not understand what the word means. His attempts are window dressing for a nationalism that, if it exists at all, is cheap, commodified, and fake. They are thus like an NFL opening ceremony trying to sell patriotism—a mere imitation of the real thing, and a poor substitute.

Aaron Bondar is an undergraduate at Binghamton University studying economics and political science. You can find him on Twitter @AaronBondar.