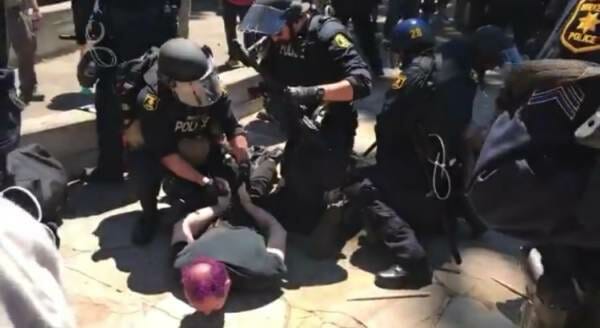 Anti-Marxist demonstrators were met with violence by masked Antifa thugs and other far left protesters–police in riot gear wrestled the violent leftists to the ground and made arrests.

The goal of Antifa in Berkeley, like in Rhode Island Sunday and in Portland on Saturday, was to shut down the assembly and beat heads.

“We’re not going to allow anyone who has banned items into that park. We’re also making an effort to keep opposing groups separated,” Berkeley Police spokesman Officer Byron White said to Berkleyside.

Why are Antifa terrorists still allowed to mask their faces and hide their identities while committing violent crimes??

Cops with guns, batons, flash grenades and tasers at Center and MLK:

Some antifa have donned masks and are walking to parks, where masks are banned per #berkeley emergency rules. #Berkeleyprotests #alloutbayarea pic.twitter.com/VyD8xr8PiL