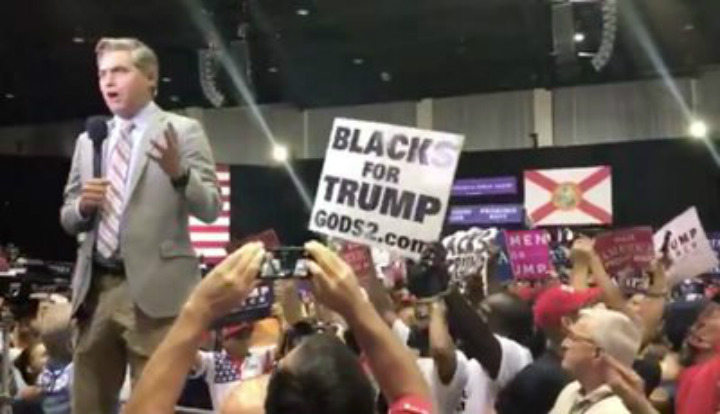 There is a notion amongst some journalists the recent protests directed towards them at a President Donald Trump rally somehow disrespected the First Amendment. Larry Sabato tweeted as much this week, while also telling CNN’s Jim Acosta “true constitutionalists …is with you.”

Politico’s Marc Caputo apologized for venting his spleen over Twitter towards the protesters. The anger journalists have at being criticized is completely understandable – and Odin knows I’m sympathetic towards journalists – but suggesting the protesters are somehow violating the First Amendment is incorrect.

The First Amendment protects the right of the people to peaceably air their grievances about whatever topic is on their minds. It doesn’t mean the rally has to be filled with logical arguments or language one might hear whilst watching a Disney princess movie. It just can’t become a riot.

This means the demonstrators can yell whatever they want at reporters. I’m not exactly sure what the protests against ABC, CBS, CNN, NBC et al are actually accomplishing outside of anger, nor am I a real fan of cries of “traitor” or giving double birds towards journalists just looking to do their jobs. The mob obviously believes journalists like Acosta are somehow damaging the president’s reputation.

Thus, they’re airing their indignation towards the gathered media. One might wonder how Republicans would feel if Acosta was badgering someone in the Obama Administration, but alas – back to the topic at hand regarding the protests of journalists. It’s like when the swarm of leftists gathered outside the U.S. Supreme Court building to decry the nomination of Judge Brett Kavanaugh to the high bench. Their rowdy actions were constitutional despite possibly showing a lack of understanding of Kavanaugh’s judicial positions. Still covered by the First Amendment.

The ire shown by journalists and their backers towards the cries of “Fake News” and accusations of somehow being unamerican is also understandable. No one really likes to be publicly heckled (except me, I feed on your hate and revulsion) as demonstrated by Jerry Seinfeld when his Seinfeld character went and heckled a friend of Kramer’s at her job. But Acosta really isn’t helping his case by playing the victim on social media or on the air. His ‘woe is me’ attitude can turn off people who would more than likely support Acosta’s tangles with the Administration. He isn’t coming off like a combative reporter looking to discover The Truth, like someone who is a tiger towards the administration and a bleating lamb when not in a scrum. It’s completely possible I’m wrong – as Acosta did have a tempestuous relationship with the Obama Administration – but it’s the impression I get when watching him. His walkout on the briefing with Sarah Sanders was grandstanding and appeared unimpressive in his appearance on CNN afterward. Perhaps I’m expecting more passion from Acosta and it’s not in his temperament – not everyone can be San Donaldson or Jake Tapper. It’s possible he’s been told by management to be more professional. It just doesn’t resonate with me as much as it should.

Others in the media aren’t helping. Their quick trigger on blaming the Capital Gazette shooting on Trump was disappointing (as were comments by at least one Trump supporter claiming the media had it coming). Journalists can be a rather protective bunch – especially when their colleagues are attacked – but the cries of “Blame Trump” didn’t exactly bring them a ton of sympathy. One can certainly understand the wailing and gnashing of teeth, but it came off much like those who blame the NRA for every shooting on the planet.

Then there’s Trump. The quacksalver is enjoying watching the horde descend on the news media whenever he howls, “FAKE NEWS” and declares them the enemy of the people. His threats to challenge TV licenses, suggestions analysts should be fined by the FCC, or charge The Washington Post’s parent company more money for shipping packages are authoritarian in nature. Trump’s refusal to answer a question from CNN because they’re “fake news” and derision of NBC for being “possibly worse than CNN” is disgusting. The president is enabling the public ridicule of media organizations who do not give him favorable coverage, then shrugging at responsibly under the guise it’s not his fault. It’s like a parent who allows their kids to run amok but decides to abdicate responsibility when confronted by others. The President certainly can’t control all of his supporters, but he can quell some of their ire by backing off the “fake news” rhetoric. He won’t – which is why his supporters will still hurl expletives at reporters – and his reluctance won’t be forgotten.

The sad part is there are other options to protesting journalists, even if the latter is covered by the First Amendment. The anger towards the Mainstream Media led to the rise of New Media with a variety of news websites popping up to provide a different kind of coverage. That’s honestly probably the best way to put pressure on the MSM – even if it’s playing the long game, not the short game. Everyone needs to be careful in their fight against one another. Trump needn’t prod the protesters into more action against journalists and should stop the ridiculous “fake news” declarations when outlets report things he doesn’t like. The protesters need to keep eschewing violence, but perhaps find better ways to complain about news coverage. Reporters need to stay combative towards Trump but be consistent and not come off as mewling by a jilted girlfriend. The critics need to remember protests are covered by the First Amendment and not some kind of attack on the freedom of the press.