Trump on tariffs: We need them to reduce the national debt 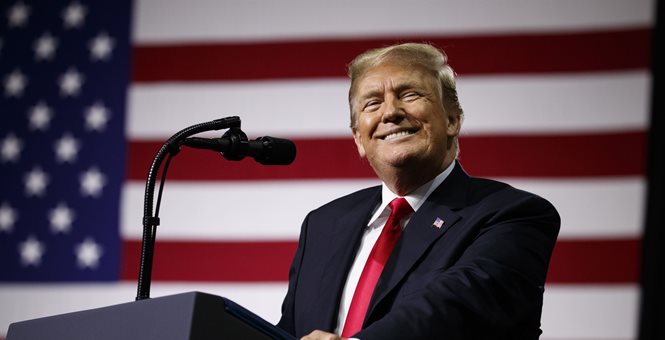 President Donald Trump is now invoking the national debt in defense of his tariffs.

Tariffs are working big time. Every country on earth wants to take wealth out of the U.S., always to our detriment. I say, as they come,Tax them. If they don’t want to be taxed, let them make or build the product in the U.S. In either event, it means jobs and great wealth…..

..Because of Tariffs we will be able to start paying down large amounts of the $21 Trillion in debt that has been accumulated, much by the Obama Administration, while at the same time reducing taxes for our people. At minimum, we will make much better Trade Deals for our country!

It is nice to see Trump throw away his farcical claim the tariffs are being done to protect national security – even if the current reasoning is as harebrained as the previous one. It appears Trump believes it’s important to repatriate the supply chain inside America.

The protectionists in the populist right and the union left will see this as a fantastic idea because they believe it will put more Americans to work. Those who have studied how markets actually work realize the folly because it actually chases away investment into the country.

“Harley-Davidson is a great example,” Cato’s Dan Ikenson recently told me over the phone. “They just said, ‘we’re outta here,’ and one of the reasons, of course, is Europe said it was retaliating so they wanted to get inside the European wall. The point is…the countries in the global economy are competing not for export markets – the way Trump pretends – they’re competing for investment.”

The number one country in the world for investment? The United States, according to the United Nations Conference on Trade and Development. UNCTAD noted last year the U.S. had the most foreign direct investment i.e. businesses in one country deciding to invest money in another country in 2016 and 2017. You certainly wouldn’t believe it with Trump’s rhetoric on the globe “ripping off’ Americans of their livelihood and money, but the facts show otherwise. People want to bring their money into the U.S. for a variety of reasons – whether it be production or service. It may not be steel or aluminum, but investors are interested in putting their money in America.

“When you attract foreign investment and preserve U.S. investment here, that means there’s more job opportunities, there’s more investment in higher-end economic industries and activities,” Ikenson declared but noted it wasn’t America’s good infrastructure or job skills which bring in the money. “[T]he main thing is rule of law and certainty to the business climate. People love that, and that’s why there’s so much investment in the US because it’s seemingly immune to upheaval – political and otherwise. But Trump is intentionally fomenting that, and, to me, that’s going to chase investment away.”

He has a point about uncertainty – one which rings as clear as the bells atop a church. UNCATD reported the U.S. saw a precipitous drop in FDI last year, along with the rest of the world, despite there being a rise in trade and Gross Domestic Product.

The fall was caused in part by a 22 per cent decrease in the value of net cross-border mergers and acquisitions (M&As). But even discounting the large one-off deals and corporate reconfigurations that inflated FDI in 2016, the 2017 decline remained significant. The value of announced greenfield investment – an indicator of future trends – also fell by 14 per cent, to $720 billion.

This may indicate more trouble on the horizon, especially if the tariff war between the U.S. and the rest of the world kicks off in earnest. The markets in various different countries, including here at home, will start to suffer and feel pain – despite the gaudy report from the government on employment.

The other laughable part of Trump’s two-part Twitter rant is the notion the tariffs will be used to pay down the federal debt. This is the same Trump whose administration admitted last month it was seeing an increase in the deficit, which will lead to an increase in the debt itself.

The 2019 deficit has been revised to $1.1 trillion. The increases in the deficit compared with the Budget are almost entirely related to increases in spending from the Bipartisan Budget Act of 2018 and the subsequent Consolidated Appropriations Act, 2018 (Omnibus). The President signed the Omnibus to secure a historic and much-needed funding increase for our military, but he does not support its unnecessary increases to non- defense spending. The MSR incorporates the President’s proposal to constrain non-defense discretionary spending going forward, saving nearly $900 billion compared with current law.

Trump does believe his policies will eventually start reducing the deficit and the debt. The problem is the administration is already increasing spending with its $12B brib-err-bailo-err-loan to farmers affected by his tariff war. One has to wonder if the administration will generously hand out more money to other industries as the trade war escalates.

The President is also lying on who will actually be paying the tax on foreign goods. He claims it will be the companies – but just who, Mr. President, do companies charge for their products? Give yourself a gold star – or $100 in Trumpbucks – if you said, consumers.

Companies will simply raise prices to make up for the tax. This means you, the American, will ‘enjoy’ the fruits of Trump’s tariffs with less cash in your wallets. It may slowly creep up on you – like a horror movie monster – but the price increases are coming. Toyota already noted they’re planning to raise prices on cars due to the tariffs and other companies will probably follow suit.

The obvious way to reduce the debt and deficit is to cut spending. Trump and Congress got part of the equation right when the tax cuts were passed earlier this year. But if spending across the board doesn’t come down – and I trust Washington to reduce spending less than I trust my own ability to throw a car into Stillhouse Hollow Lake in North Central Texas – the debt will keep rising.

Trump may have asked for a lower budget for FY2018, but given his decision to sign a budget which raised spending earlier this year (a budget put together by a Republican Congress), I’m reluctant to think any of his proposals will see the light of day. Especially if the House or Senate flips or Republicans see their majority become smaller and smaller.