Everyone knows that America is in the midst of an opioid crisis. Forty-two thousand drug overdose deaths involved opioids in 2016. Opioids were behind a two-year drop in life expectancy in 2015 and 2016, and deaths from the hyper-deadly synthetic opioid fentanyl and its variants likely increased through 2017.

What many do not realize is that rates of overdose deaths have exploded across drug types, not just from opioids. Those from methamphetamine and benzodiazepines have risen. But the least-discussed drug in proportion to its deadliness is the one that almost certainly killed around 10,000 people in 2016: cocaine.

After a years-long lull, cocaine overdose death rates have spiked, more than doubling between 2009 and 2016. The swift increase means that cocaine may soon outpace opioids in terms of deadliness, thanks to a declining numbers of prescriptions.

Yet cocaine has received little attention in the media and from elected officials. This is doubtless in large part because the opioid crisis is deadlier (by a factor of about four). But a single-minded focus obscures the multi-drug nature of America’s current crisis. This monomania almost certainly explains the lack of discussion of cocaine, especially because where the opioid epidemic—which has consumed much of the nation’s drug policy oxygen—is overwhelmingly impacting white people, the victims of cocaine overdose deaths are overwhelmingly African Americans. 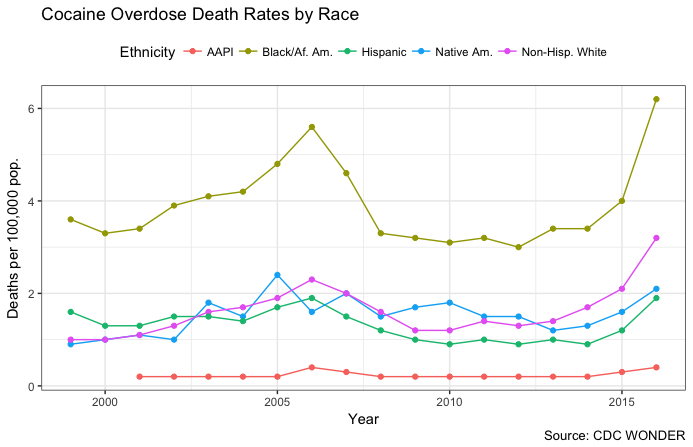 Black Americans routinely outpace their white, Native American, Hispanic, and Asian American countrymen in deaths from cocaine overdoses. They’re also the group for whom the increases in overdose rates have been starkest, increasing by more than 50 percent between 2015 and 2016 alone. And that’s likely lowballing the true number: research from the University of Virginia suggests that opioid deaths are undercounted by 20 to 35 percent per year, and cocaine death counts likely suffer from the same data issues.

As with most drugs, the majority of black overdose deaths from cocaine are associated with men. But cocaine fatalities are different from opioid overdoses in an important way. Opioid deaths skew younger, in the 25-to-44 age range, including among white Americans. Cocaine overdose deaths among African Americans, by contrast, skew older, peaking at over 20 deaths per 100,000 black men between the ages of 50 and 64. 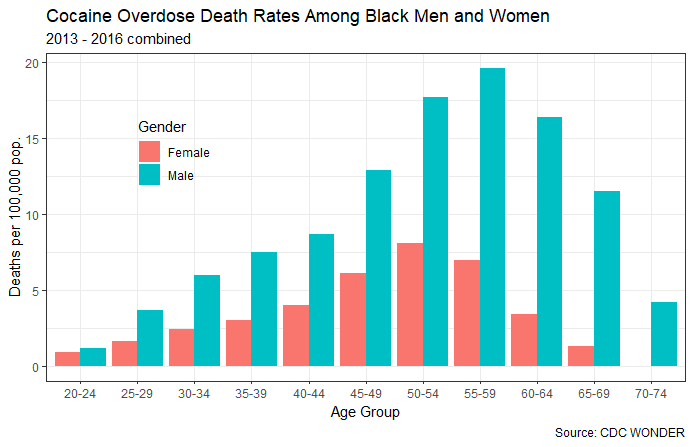 To put it succinctly: thousands of African Americans, mostly men and mostly later in their lives, are dying in a cocaine overdose boom that’s gone largely unnoticed and uncovered. The obvious questions are: what’s causing this spike? And why isn’t it getting more attention?

Unfortunately, there doesn’t appear to be a silver bullet explanation. But a number of different factors, operating in concert, have likely played a role.

On the supply side, the Drug Enforcement Agency (DEA) has pointed to Colombian cocaine as a major culprit. Ninety-two percent of cocaine used in the United States comes from Colombia, and cultivation there has climbed, with the amount of farmland dedicated to coca rising between 10 and 20 percent between 2015 and 2017. The Office of National Drug Control Policy ties this increase to heightened demand in the United States.

While supply in Colombia may have risen, it’s not obvious that the volume of cocaine actually in the United States has substantially increased. Of the 21 DEA field divisions, only three saw a greater cocaine availability in 2016 as compared to 2015, and just four reported a “high” rather than “moderate” availability of cocaine in the first half of 2016.

Other indicators of an increased supply of cocaine are similarly mixed. Data I obtained from U.S. Customs and Border Protection indicate that the amount of cocaine seized along the southwestern border—through which much Colombian cocaine passes—has risen by about 50 percent since 2013, but is still at levels below 2009 and 2010, when cocaine overdose rates were relatively low. And the number of samples of cocaine reported by law enforcement to forensic laboratories—reasonable proxy for the quantity of illicit cocaine in the country—rose slightly but actually remains near historic lows. 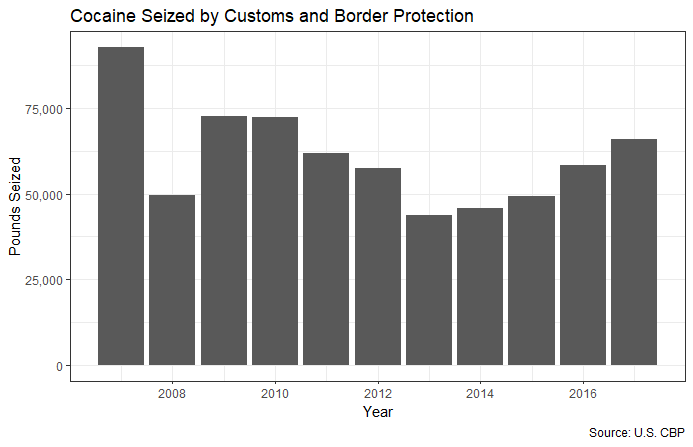 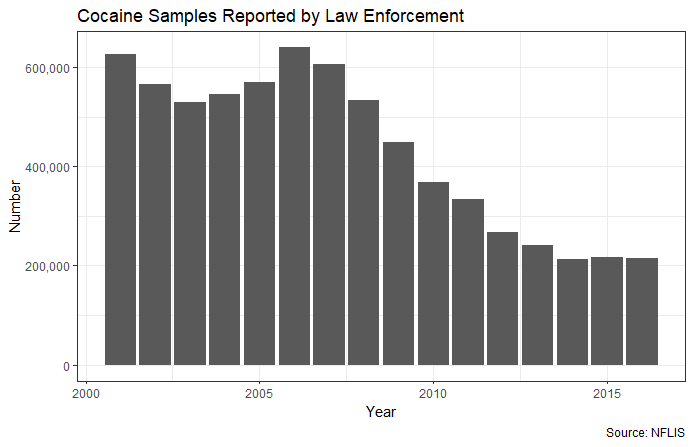 It is also possible that the spike in cocaine deaths has resulted from an increase in demand. Data from the National Survey on Drug Use and Health—the gold standard in measuring drug use—indicates that the number of black people who have used cocaine in the past year has increased, having trended upwards since 2011. (The reported number of users did fall in 2016, although this may be a result of the natural fluctuation in the sample from which NSDUH results are drawn.) 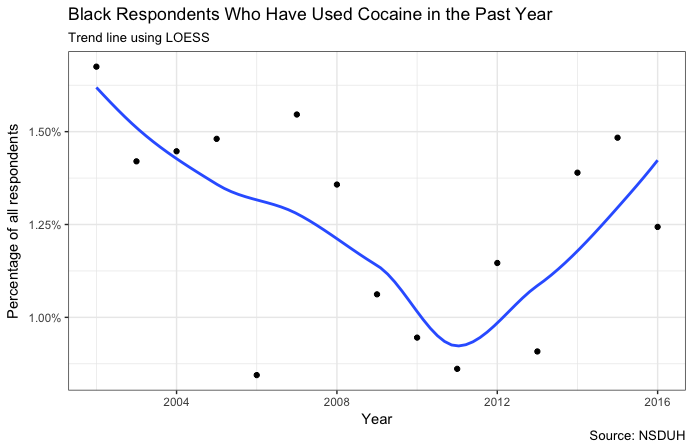 But analysis from the Brookings Institution suggests the story is not that simple. Authors Beau Kilmer and Greg Midgette found that three indicators of cocaine use increased from 2010 to 2016, while another four—which they said were likely better measures of usage—remained flat. They also point out that while NSDUH “is well-run and a surprisingly reliable source of information” about light drug usage, the information it provides on hard drugs may be less reliable.

Beyond basic supply and demand, we can observe critical trends in the kinds of substances black users of cocaine are consuming. Kilmer and Midgette highlight the surge in overdose deaths that involve both cocaine and opioids, especially fentanyl. A study in the American Journal of Public Health attributes almost the entirety of the population-wide increase in cocaine overdose deaths to deaths also involving opioids. Its authors, in a letter to the Journal of the American Medical Association, find that 40 percent of cocaine deaths also involved synthetic opioids as of 2016.

While these analyses don’t look specifically at African Americans, adulteration with synthetic opioids appears to explain much of the cocaine overdose increase among that group. 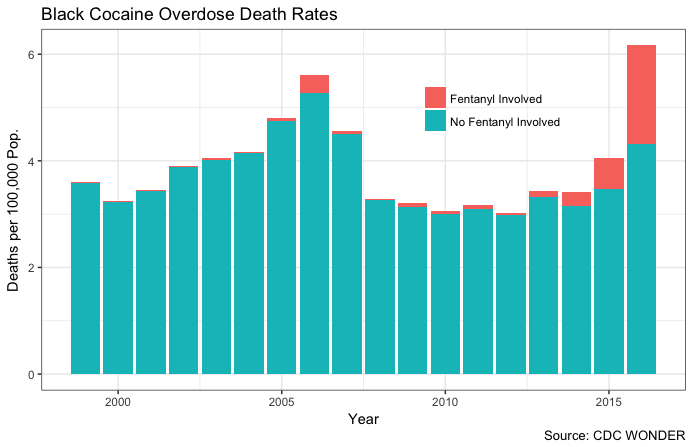 The other substance that may be relevant is crack cocaine (cocaine that has been refined into a crystal and is smoked rather than snorted or injected). The CDC doesn’t measure what form of cocaine people die from consuming, so the crack overdose death rate is unknown. But analysis of the 2002-to-2015 NSDUHs shows that while African Americans make up a smaller proportion of users of cocaine (8 percent) as compared to their composition of the population (13 percent), they make up a much larger proportion (30 percent) of users of crack cocaine.

As with cocaine, self-reported crack use by African Americans has risen over the past several years. 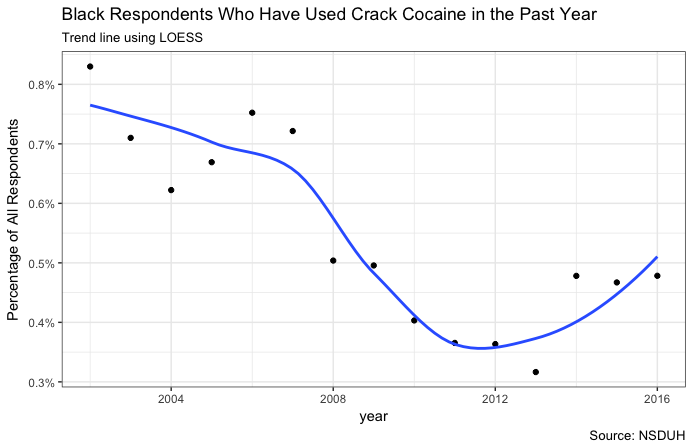 Lastly, it is important not to discount broader social phenomena as determinant of drug crises. Watchers of the opioid epidemic look frequently to Princeton economists Anne Case’s and Angus Deaton’s “deaths of despair” analysis, which situates white opioid overdose deaths in a broader milieu of rising deaths from alcohol, suicide, and heart disease, especially among those who lack access to education and wealth. Far from being a pure supply shock, many argue, the opioid epidemic is one sign of the left-behindness of white America.

Much like white opioid consumers, African Americans who consume cocaine are worse off than those who don’t. NSDUH data show that past-year cocaine users are more likely to make less than $20,000 per year than their peers, who in turn outperform them in every other income category. Past-year cocaine users are also more likely to have not graduated high school and are less likely to have college degrees than their non-using peers. 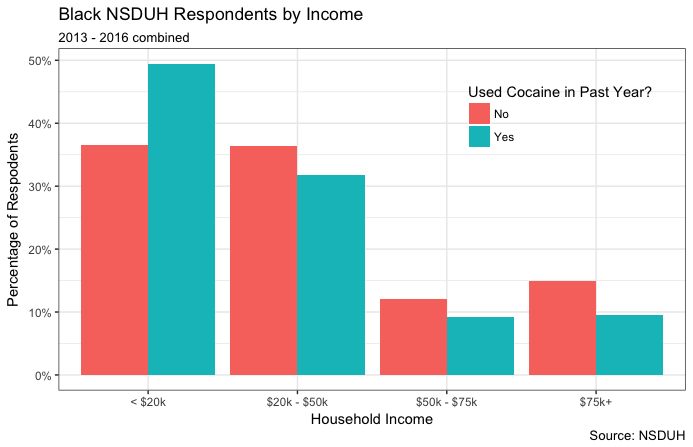 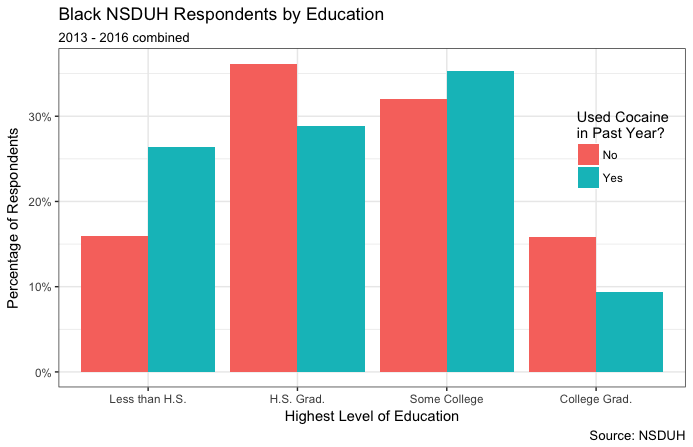 Of course, the causal direction of these relationships is ambiguous—cocaine use could cause adverse outcomes rather than vice versa, or both could be driven by underlying socioeconomic variables. The reality is likely a mix; few social pathologies have only one cause.

On the other hand, there is important insight to be gleaned from considering the causal direction of what might be driving the cocaine spike. Much has been made of the differences in social attitudes towards people addicted to cocaine during the crack crisis of the 1980s and those addicted to opioids today. The reasons for this disparity are several—law-and-order approaches were embraced by black as well as white communities in the 1980s, while much of the opioid epidemic is driven by pharmaceutical firms who, rightly or wrongly, wield a degree of social authority that drug dealers lack. Nonetheless, one can’t help but conclude that the color of the addicted person’s skin plays a major role in how much sympathy he receives, both from the general public and especially from policymakers.

Recognizing the cocaine crisis among African Americans means understanding America’s current predicament not as an opioid epidemic, but as a drug epidemic, and not as a white problem, but as a problem that crosses communities. At the same time, it also means that as a matter of justice, it is imperative that black Americans suffering under the scourge of cocaine be afforded precisely the same concern and empathy as white Americans coping with opioid addiction.

An effective drug control policy is multidimensional: enforcement, treatment, harm reduction, and education are all vital to stopping any epidemic. Drug enforcement officials need to work towards curbing coca production—ostensibly a priority of the Colombian president-elect. More effective border control is essential for stemming the flow of the drug from Mexico, a fact that goes doubly for adulterant fentanyl smuggled over the border. Fentanyl also arrives to the United States by mail; legislation like the Ending the Fentanyl Crisis Act of 2018, which would appropriate $9 million to the Postal Service to combat fentanyl, is much needed.

Harm reduction and treatment tools exist for opioids, in the form of overdose-reversing medications like Narcan and maintenance medications like methadone. No such readily administrable drugs exist for cocaine; ER personnel may administer a tranquilizer to sedate a patient, but no long-term medication-assisted treatments currently exist, although NIDA notes a number of promising leads. Supporting research into these tools should be viewed as a vital public health concern.

Lastly, education on the dangers of cocaine use is important for discouraging rising cocaine consumption. While many are skeptical of the efficacy of such campaigns, public education has been shown to lower the number of new users, for example, among would-be teen smokers. Especially vital—as a harm reduction measure as much as anything—is educating potential and active users about the possibility of fentanyl adulteration, a threat that many may not be aware of.

Americans, black and white alike, are struggling with drugs. We should have no sympathy for those who peddle poisons, whether cocaine or heroin. But we owe as much empathy—and, in proportion to its severity, as much dedication of public energy and funds—to the victims of cocaine as to the victims of heroin, regardless of the color of their skin.

Charles Fain Lehman is a staff writer for the Washington Free Beacon. He writes about policy, covering crime, law, drugs, immigration, and social issues. Reach him on Twitter (@CharlesFLehman) or by email at [email protected].