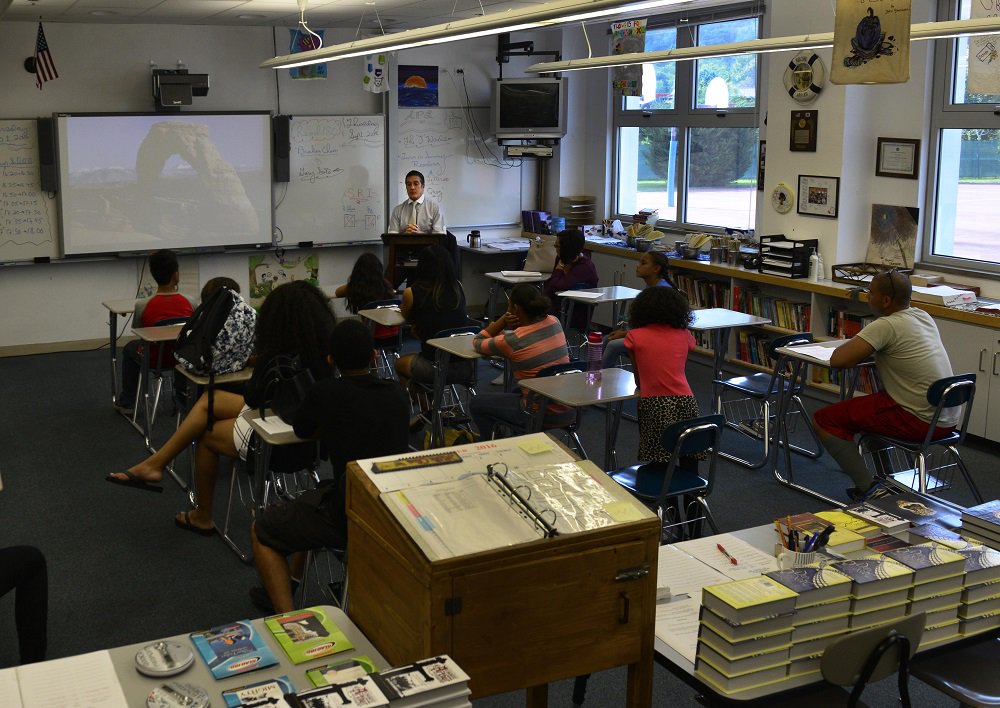 Shortly after President Trump’s inauguration, a group of public school history teachers in the posh Boston suburb of Newton pledged to reject the “call for objectivity” in the classroom, bully conservative students for their beliefs, and serve as “liberal propagandist[s]” for the cause of social justice.

This informal pact was made in an exchange of emails among history teachers at Newton North High School, part of a very rich but academically mediocre public school district with an annual budget of $200 million, a median home price of almost half a million, and a median household income of more than $120,000. Read the entire email exchange here.

I obtained the emails under a Massachusetts public records law after one of those teachers arranged, earlier this year, for an anti-Semitic and anti-Israel organization to show Palestinian propaganda films at Newton North. This stunt earned the Newton Public Schools district a rebuke from the New England branch of the Anti-Defamation League and from Boston’s Jewish Community Relations Council. But, as the teachers’ emails reveal, Jew-hatred is not the only specter haunting the history department at Newton North.

It was late on a cold and snowy New England evening in February 2017, and Newton North history teacher Isongesit Ibokette was venting at his keyboard about the new guidelines for avoiding bias in teaching. They had been sent out by Newton North’s principal that morning, prompted by the general ill will among teachers for the new occupant of the White House.

The guidelines asked teachers to remain objective while teaching about historical and current events; and to treat all students, regardless of political opinion, with respect. Teachers were told: “For current controversial issues (health care, immigration, environmental policies, gun laws), teach students that there are different perspectives and present the reasoning of those who hold those different perspectives.”

Ibokette was having none of it. He typed this reply: “I am concerned that the call for ‘objectivity’ may just inadvertently become the most effective destructive weapon against social justice,” and sent it to the members of Newton North’s history department.

Ibokette was responding to an email from another Newton North history teacher, David Bedar. Bedar was same teacher who hosted the anti-Semites at Newton North, and has played a significant role in the years-long controversy over anti-Jewish bias in the public schools of the heavily Jewish suburb.

Earlier that February day, Bedar sent an email to fellow Newton North history faculty, accusing President Trump and his supporters of “nativism, xenophobia, homophobia, etc.,” and objecting to the following “don’ts” that the Newton North principal had asked teachers to avoid:

These guidelines seem like Pedagogy 101, and are foundational to correctly applying logic and reason. Yet Bedar, who holds a master’s in teaching from the prestigious Duke University, admitted to his colleagues:

Personally, I’m finding it really difficult in the current climate to teach kids to appreciate other perspectives. . . [T]he ‘other viewpoint’ might not really be an argument ‘about which reasonable people can disagree’ and might not lead to any kind of intellectual, policy debate; it might just be blatantly racist. . . . [I]t feels wrong to not call out ideas that I know will offend many of my students and create a hostile and potentially unsafe environment. . . . I’m worried that as a school we’re so focused on making all kids feel safe and being PC that we’re not showing enough concern for [immigrant] students whose very rights to attend this school and receive an education are being seriously threatened. . . . I don’t feel good about protecting [a nativist] student’s right to a so‐called ‘political’ view. . . Do I really have to avoid saying ‘I think nativism is bad?[‘] The eugenics movement was based in large part on immigrants destroying our country.

Bedar’s strawman argument is fallacious. Trump administration immigration policies and the Americans who support them have nothing to do with eugenics. To claim without evidence and by tenuous association that they do is repugnant.

Don’t Fire Me for Being a ‘Liberal Propagandist’

Much worse yet is Bedar’s display of extreme political intolerance toward the views of millions of his fellow Americans, among whom are, presumably, a number of his own students. Support for immigration law enforcement is by no means a fringe political perspective, even in Massachusetts. It is certainly not some sort of taboo that must be expunged from classroom debate, and Newton North guidelines explicitly tell teachers to teach about the reasoning behind different perspectives on immigration.

Yet, in remarkable language, Bedar demanded that the school allow him to propagandize against it, and to do so without any professional consequences: “I have an obligation to teach civic duty and teach kids right and wrong, and about social justice. . . . This will probably be an unpopular opinion, but I don’t actually think we should have the option of not discussing [social justice] issues. I feel responsible for doing so. . . . We can help kids interpret the lessons of the past better than anybody. I feel like a phony when I’m not doing that. . . . But..this is hard. I don’t want to get fired for being a liberal propagandist” (emphasis added).

Bedar is, of course, wrong on multiple levels. A master’s degree in teaching is risibly inadequate to qualify anyone as the arbiter of right and wrong, and a history teacher’s basic obligation is to teach history accurately and objectively. A sine qua non of that obligation is to avoid propaganda of any kind.

Unfortunately, Bedar does not seem to be very good at the actual basics of teaching history, much less at interpreting the lessons of the past, shortcomings for which he compensates by being a reasonably good propagandist. For example, Bedar’s erroneous belief to the contrary notwithstanding, the early twentieth-century eugenics movement was based less in conservative nativism than in the same New England progressivism Bedar preaches today. The eugenicist Immigration Restriction League was founded in Boston by three Harvard progressives. As The Guardian well puts it, eugenics is “the skeleton that rattles loudest in the left’s closet.”

Indeed, if common cause with the eugenics movement is Bedar’s litmus test for approved opinions in the classroom, then opinions supporting deficit spending and birth control should be as forbidden there as nativism seems to be. Left-wing economist John Maynard Keynes called eugenics “the most important, significant and, I would add, genuine branch of sociology which exists,” and believed its implementation would “be a great moment in the progress of civilization.” Planned Parenthood founder Margaret Sanger was an inveterate eugenicist who believed that “the campaign for Birth Control is not merely of eugenic value, but is practically identical in ideal, with the final aims of Eugenics.”

All of this is not to argue over birth control, deficit spending, and which ideologies are responsible for what travesties. Rather, it is to say that history, politics, and ideology are complicated things. Yet, in the history lessons they teach, propagandist teachers like Bedar insist on reducing all of this complexity to a Manichean struggle between “right and wrong,” the essence of which they insipidly correlate with “Democrat and Republican.”

In that kind of lurid light, where no shades of gray can possibly exist, people who lack the “right” politics must pose, in Ibokette’s words, a “real, immediate, and present danger” to human progress, and to all that is right and good. Men who light up the world in such stark contrast fill history books with their crimes.

This Is Like My Childhood Education in the Soviet Union

The year after the Soviet Union fell, I entered fifth grade at State School No. 8 in the Siberian city of Tomsk, where I was born at the beginning of the end of that evil empire. Usually, Soviet children started learning the history of Russia in fifth grade, but my teacher told the class that she had nothing to teach us anymore.

Left-wing activists are dug in at all stages of the American educational process from preschool to graduate school.

“The old history books are useless now,” I distinctly remember her telling us. “They were full of Communist Party lies.” Just like that, the entire monument of official Soviet history, built upon an ideological foundation of lies and held together by despotism, crashed as soon as the coercive power that had kept it upright for 74 years disappeared in an instant.

Undaunted by the failures of their comrades in the Soviet Union and other socialist hell-holes, left-wing activists are dug in at all stages of the American educational process from preschool to graduate school, where they seek to replicate the Soviet Union’s abuse of its children’s minds with lurid lies.

Even science education is facing a hostile takeover by progressive luddites with scientific degrees who insist, as one biology PhD student did recently, that “to think there are universal truths perpetuates a particular kind of able bodied white cisgender male logic.” The result of all this left-wing obscurantism is a brainwashed Generation Z that inhabits a false reality colored in stylized black and white by leftist dogma—the same false reality that Soviet school and preschool battered into me as a child.

The Teachers’ Administrators Back Them Up

After Bedar complained that he didn’t want to get fired for being a “liberal propagandist,” his fellow history teacher, Ibokette, wrote back: “David, if you get fired for doing exactly what history teachers, and indeed all rational and ethical‐minded adults should indeed be doing, I will be right behind you.”

I wish this would happen, not because I want them punished, but because I think the way they teach history is a form of child abuse. But Bedar and Ibokette’s superiors, all the way up the ladder, are fully on board with this abuse. Bedar’s direct supervisor, Newton North history department chair Jonathan Bassett, replied to his revolt against reason with this: “David: Your ‘essay’ is very good, and raises a lot of the questions that we are all dealing with. . . . We are in unprecedented times, and we are all struggling to do good.”

The Left is abusing American high school education in its struggle—not to do good, but to gain and retain political power. The ongoing trend of growing political intolerance and ideological bigotry among the newest American adults will continue, and nothing good will come of it. In the Soviet Union, I’ve seen what young people could be turned into, what I myself could be turned into. Trust me, America hasn’t seen anything yet.