Hoping for Peace in the Horn of Africa

The political map in the Horn of Africa is being redrawn at astonishing speed.

At the beginning of June, Ethiopian Prime Minister Abiy Ahmed made the stunning announcement that his country was ready to move on from decades of conflict and rancor by giving the disputed iconic town of Badme back to Eritrea.

The result has been a rapprochement between the two former sworn enemies that shows no signs of slowing down, with potentially momentous implications for Ethiopia’s and Eritrea’s economies and peoples, and for the surrounding region.

“It represents the basic stepping stone for changing political, economic, and social ‘frozen’ situations in both countries,” says Milena Belloni, a researcher at the Department of Sociology at the University of Antwerp in Belgium who is currently writing a book about Eritrean refugees.

Badme is where a terrible two-year war broke out in 1998 between the two neighbors. Yet even after the 2000 ceasefire, the town continued to poison relations when Ethiopia refused to comply with the internationally brokered Algiers Peace Accord, which included ceding Badme to Eritrea. 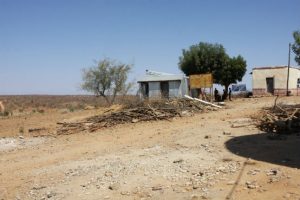 There’s not much to greet Eritrean refugees upon their arrival at the entry point compound in Badme, a dusty, sparse town with a military presence.

Years of animosity and ill will followed, turning into decades.

But a week after Ethiopia’s Badme announcement, Eritrea sent a delegation to Addis Ababa, Ethiopia’s capital—the ball was rolling.

Then on July 8, Abiy became the first Ethiopian leader to visit Eritrea in nearly two decades. After touching down at the airport in Asmara, the Eritrean capital, Abiy embraced Isaias before conducting an official state visit during which Eritrean state television showed the two leaders smiling and laughing together.

“We have agreed to open up embassies in our respective countries, allow our people to visit each other’s cities, and allow our airlines and ports to operate freely,” Abiy said at a banquet capping the historic visit and officially announcing the normalization of relations. “Love is greater than modern weapons like tanks and missiles. Love can win hearts, and we have seen a great deal of it today here in Asmara.”

This was followed in mid-July by Isaias making an equally historic visit to Ethiopia, where he reopened the Eritrean embassy in Addis Ababa as people danced and ululated in celebration.

Abiy has swiftly turned Ethiopia’s stagnant political scene on its head since coming to power in April after the shock resignation of his predecessor, which itself came after more than two years of anti-government protests that rattled the country.

Abiy has introduced a wave of reforms, releasing journalists and opposition figures from prison and opening the state-run economy.

“This isn’t peace between two ordinary neighbors,” Hallelujah Lulie, a political analyst specializing in the Horn of Africa, posted on Twitter in response to the Asmara visit. “Ethiopia and Eritrea share complex memory and heritage. Recognizing their intertwined past and common destiny will have a positive political and socio-economic dividend for them, and will redraw the geopolitical map of the Horn.”

Nearly 30 years ago, when Eritrea was Ethiopia’s most northern province, the current leaders of the two countries were fellow rebels in the struggle against their nation’s communist dictatorship. But after defeating that dictatorship and following a peaceful referendum that gave Eritrea its independence in 1993, relations began to sour over political and economic frictions.

In 1998, Eritrea invaded Badme, claiming that it was historically Eritrean land. Two years of fighting followed at a cost of more than $4 billion to the two already desperately poor countries, characterized by trench warfare that left more than 80,000 dead.

But even after the 2000 ceasefire, a state of war persisted due to the unresolved issue of Badme and the Algiers Peace Accord never being properly implemented.

Ethiopia and Eritrea became locked in their own Cold War of deadly subterfuge and smoke and mirrors, with significant regional fallout. Both countries engaged in proxy fights against the other in neighboring Somalia and South Sudan, helping to destabilize an already volatile region. 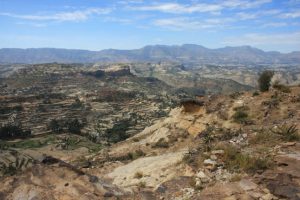 That appears to have finally changed. Abiy’s reforming strategy includes, observers say, linking political, social, and economic transformation in Ethiopia to regional dynamics, with Eritrea a natural focus given how close the two countries are.

At the same time, Eritrea’s relations with Arab countries, and even with the West, have improved, Hallelujah notes, making the Eritrean regime more open to rapprochement.

Behind the scenes, Saudi Arabia and the United Arab Emirates, which have forged increasingly close ties with Eritrea over the past few years, have likely helped mediate and lay the groundwork for the breakthrough.

The West, on the other hand, has been roundly criticized for not doing more to heal the rift between Eritrea and Ethiopia, especially when the fallout was badly impacting the region.

The result of that strife was that Eritrea became increasingly isolated and subjected to international sanctions. Life was miserable for Eritreans—hence the unending exodus of Eritrean refugees into Ethiopia or further afield to Europe—as the Eritrean government grew increasingly repressive and militarized.

But lately the U.S. has signaled a shift in its dealings with Ethiopia, which some observers say may have influenced the Ethiopian government to be more conciliatory towards Eritrea.

On April 10, the House of Representatives unanimously adopted House Resolution 128, encouraging inclusive governance in Ethiopia with an emphasis on human rights.

The bill—unusually outspoken in its criticism of Ethiopia’s government—though non-binding, will still be taken note of by the Ethiopians, observers say, due to the billions of dollars in financial aid that America provides to Ethiopia every year.

“The passage of HR-128 by the U.S. House of Representatives without any opposition was a historical achievement,” says Tewodrose Tirfe, chair of the Amhara Association of America, a U.S.-based advocacy group for the Amhara, Ethiopia’s second largest ethnic group. “The Ethiopian-American community is finally understanding how the American democratic process works, and believe they can make a difference in Ethiopia by being engaged in the democratic process.”

The formal end of hostilities between Ethiopia and Eritrea, and with it the vicious cycle it fed into, could clear the way for an end to mandatory conscription in Eritrea and even to reform in a country that’s been called the North Korea of Africa due to its closed authoritarianism. 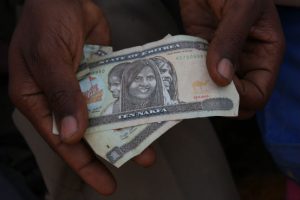 A 31-year-old Eritrean man holds all the money he has left after crossing into Ethiopia: 13 Eritrean nakfa (less than one euro).

But even with relations between the two countries normalized, the complex process of returning disputed territory and figuring out what happens to those affected poses significant challenges, ever shadowed by the possibility of more disagreements flaring up.

“It will be important to watch what happens when these two very different yet historically connected places draw closer to each other after all this time,” says Jennifer Riggan, an associate professor of international studies at Arcadia University in Pennsylvania, who studies Eritrean refugees in Ethiopia. “Peace with Ethiopia is not the same as political, human rights, and civil rights reforms in Eritrea, and until those are changed people will keep leaving the country.”

Nevertheless, many watching the whirlwind of events remain optimistic that the shared history of the two countries, underpinned by a shared culture, religion, and familial ties, will overcome the differences.

Thousands of families separated by the war—in particular those of mixed Ethiopian-Eritrean marriages—could now be reunited. And beyond the obvious economic and political benefits of the detente could come psychological and emotional healing after decades of trauma and loss.

“Moving this quickly and firmly towards peace between the two countries is very emotional and emotionally important for the people of the two countries,” Riggan says. “Indeed, this conflict was never about people, but governments.”

James Jeffrey is a freelance journalist who splits his time between the Horn of Africa, the U.S., and the UK, and writes for various international media. Follow him on Twitter @jrfjeffrey.