On Iran, the Neocons Are No Ronald Reagan 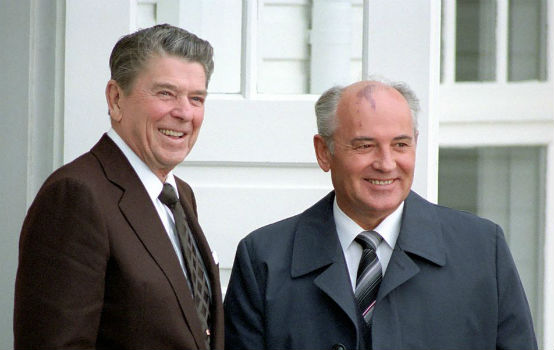 In their pursuit of a policy of maximum pressure on Iran, America’s neoconservatives have pushed a nostalgic narrative: the Trump administration can bring down Iran’s theocracy the way that the Reagan administration helped defeat and dissolve the Soviet Union.

This comparison has been advanced by the Foundation for Defense of Democracies (FDD), which promotes draconian sanctions against the Islamic Republic. Its arguments figured prominently in Secretary of State Mike Pompeo’s recent speech at the Reagan library in which he asserted that Iran is still a revolutionary regime “committed to spreading the revolution to other countries, by force if necessary.”

The strategy to confront and collapse the Soviet Union included military and economic pressure coupled with a focus on human rights abuses and corruption, as well as U.S. support for indigenous dissidents. The comparison to Iran is flawed on a number of levels, and even in those areas where some overlap exists, such a plan is unlikely to be successfully implemented by the Trump administration.

While neoconservatives have portrayed the Islamic Republic of Iran as a global bogeyman on the order of the USSR and argued that it should be President Trump’s “pre-eminent challenge,” it remains a mid-level power in a region that most Americans, including Trump, would like to quit.

Iran has never successfully exported its unique theocratic-led system, even to neighboring Iraq, with its Shiite majority, or Lebanon, where Shiites are a plurality and Iran has a potent ally in Hezbollah. The Soviet Union, by contrast, dominated Eastern Europe for four decades and supported communist parties throughout the world, including in Iran when it was under the Shah. It invaded other countries at will, crushing the Prague spring of 1968 and entering Afghanistan in 1979 to shore up a friendly regime.

The Soviet Union was also a nuclear peer competitor of the United States, possessing a massive atomic arsenal. Iran has never developed nuclear weapons and could be constrained for more than a decade from building them if the United States returned to the Joint Comprehensive Plan of Action (JCPOA) or if a rump JCPOA somehow survives the U.S. unilateral withdrawal.

The comparison to the Soviet Union does work in the sense that Iran’s economy is now under severe strain, although the reasons are not the same. The Reagan administration outspent the Soviet Union in a massive arms race that left Moscow unable to satisfy the growing demands of its long-suffering consumers and maintain its military edge and alliances, including the debilitating war in Afghanistan. The Trump administration is collapsing the Iranian economy through sanctions that have frightened away major multinational companies and destroyed confidence in the Iranian currency.

Both the old USSR and Iran have autocratic systems that repress political expression and jail dissidents. It is entirely appropriate for the U.S. and other countries to publicize these abuses and seek to penalize those most directly responsible. However, the Trump administration’s credibility in denouncing what Pompeo called a “mafia” government run by “hypocritical holy men” is undercut by egregious double standards. This is, after all, an administration led by a president who has called North Korea’s brutal leader Kim Jong-un “honorable,” sword-danced with Saudi autocrats, and fawned over reprehensible leaders from the Philippines to Egypt.

That support, however, does not extend to allowing actual Iranians to come to America—unlike Reagan’s embrace of Soviet exiles and others fleeing persecution. Thanks to the travel ban, which was recently upheld by the Supreme Court, most Iranian citizens are barred from even visiting the U.S. And while academic exchanges are technically still allowed, the “extreme vetting” required for Iranians—and their fear that they may not be able to return to the U.S. if they have to leave for any reason—has severely undercut this key feature of old-style public diplomacy.

Iran and the United States, of course, lack diplomatic ties, which were so instrumental in promoting people-to-people contact with the Soviet Union. This author was an exchange student in what was then called Leningrad in the 1970s, an experience that humanized the Soviet Union in the eyes of the visiting Americans and performed a similar function for our Soviet counterparts.

Unfortunately, few Americans know the reality of today’s Iran and are thus easily manipulated by propagandists who cast the country in relentlessly negative terms.

If despite all these differences, the Trump administration really embraced a Reaganesque approach to Iran, it would not only rescind the travel ban but would sincerely pursue new negotiations that build on the JCPOA.

Instead, the administration is punishing Iran for non-compliance and demanding that it capitulate and reverse all its other foreign and domestic policies. This approach almost certainly guarantees that Iran will not produce an “Ayatollah Gorbachev” willing and able to resolve the long U.S.-Iran divide and further liberalize Iranian society. The main victims will be the Iranian people but American interests will also suffer.

Barbara Slavin directs the Future of Iran Initiative at the Atlantic Council. The views expressed here are her own.