Stupid, But Not Socialism 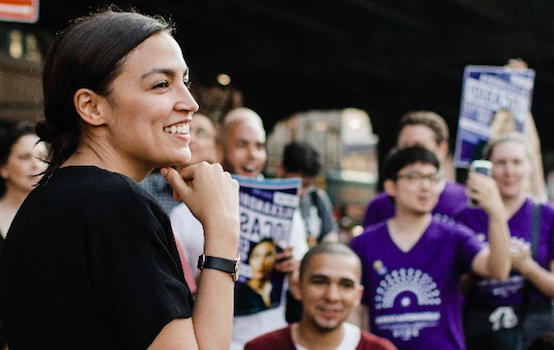 The Washington Post earlier this year ran a guest editorial by longtime Republican “political consultant” Ed Rogers headlined “The Democrats’ Frightening Embrace of Socialism.” According to Rogers, the Democrats are in fact becoming “like the old socialists” and are preparing to ruin us with their plans for handing out free college tuition and other social benefits. These progressives, according to Rogers, want to go back to the failed socialist plans of the 1950s, which could radicalize American politics.

Last Saturday evening I heard a cretinous version of the same message when Fox News’s own Greg Gutfeld went after Alexandria Ocasio-Cortez, the young radical from Scarsdale, New York, who is likely to become a congresswoman this fall. In Greg’s opening “monologue,” we learned that Alexandria is an unhinged socialist, who, along with Bernie Sanders and Elizabeth Warren, is taking the Democratic Party “outside the mainstream.” Additionally, according to Ed Rogers, “moderate” Democrats like Bill Clinton are now being overtaken by “socialists,” just as Hillary was in the 2016 presidential race. Supposedly, Bill, who “understands the global benefits of capitalism,” is really put off by the socialist gibberish coming from Warren, Sanders, and Bill’s erstwhile protégé and New York senator Kirsten Gillibrand.

Several points came to mind as I considered this line of attack. First, the attempt to distinguish between “moderate” Democrats like Bill Clinton and radical ones is largely invented. Most of the presumed moderates have never really resisted lurching to the left, especially on social issues, if that’s where the party’s energy has moved. Note how Barack Obama, the zealous advocate of the Defense of Marriage Act in 1996, has become an enthusiastic supporter of gay marriage and its imposition on the states by the Supreme Court. And, of course, Bill and Hillary have thoroughly changed their views on illegal immigrants since the 1990s. To its credit, the Huffington Post has thrown this in Bill’s face.

Democrats, like Republican politicians, “grow” when they think circumstances require it. The effort to distinguish nice Democrats from the other ones is an electoral strategy for raiding the other party’s voters. Both parties exaggerate the “radical” direction in which their opponents are moving in order to pick off parts of the other’s base.

It is equally obvious that Republicans, by spending their energy pinning the scarlet letter of socialism onto Democrats and focusing on the president’s economic successes, are content to avoid social issues and leftist intellectual intolerance, which is of growing importance to the base and perhaps to a widening electorate. If they do push the free speech issue at all, it is usually with specific and special messengers, e.g., black homosexual Republicans, Hollywood actors who have just switched parties, second-wave feminists, and Zionist Democrats complaining about pro-Palestinian Democrats. Are there no white Christian fundamentalists out there suffering the consequences of intellectual intolerance and government harassment?

Moreover, I’d be happy if the Republicans explained that what Ocasio-Cortez is proposing is stupid, but not socialism. She is calling for open borders and lavish government subsidies for all her favored constituencies, particularly irresponsible Millennials. This is not an economic system but a call for chaos. By the way, who are those socialists of the 1950s who, according to Rogers, the Democrats are full of “nostalgia” for? As a boy I lived under a socialist mayor in Bridgeport, Connecticut, who served from 1933 until 1955, and I don’t remember Jasper McLevy being very radical about anything. The socialist presidential candidate of my youth, Norman Thomas, was by today’s standards a conservative Presbyterian minister.

Finally I would observe that the Republicans and their media cheerleaders may have no choice if they hope to survive electorally but to continue on their current course, focusing on economic successes and linking their opposition to socialism. They might even, like Rogers, associate the Democrats with “Marx’s communist philosophy that set the stage for the greatest ideological massacres in history.” A majority of the female vote in this country is already lunging toward the left on social issues. Although female employment prospects have gone up dramatically under the current administration, Trump enjoys the support of less than one third of woman voters. Women are also by 12 percentage points more likely to vote for Democrats than Republicans, and this disparity is even greater among college-educated women. On almost every social question, women poll to the left of men. The GOP may thus be fully justified in virtue-signaling towards the left while repeating ad infinitum its good economic news.

Equally significant, white males vote heavily in favor of Republicans, and I can’t imagine anything in the foreseeable future that would reverse this trend. It is moreover doubtful that most males who vote Republican are social conservatives, as opposed to members of a voting bloc that views itself as excluded from those groups that are privileged by the other side. It is therefore irrelevant in terms of male voting habits what Republican operatives say about the socialists Ocasio-Cortez and Warren. Most white male voters will likely go for the party that doesn’t showcase outspoken feminists and doesn’t intend to burden male employers with anti-discrimination suits.