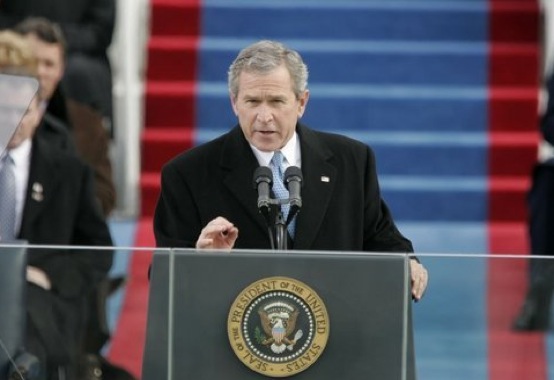 In the wake of President Trump’s Helsinki press conference, National Review declared itself “Against Moral Equivalence.” The magazine claimed that there could be no equating American meddling in foreign elections with Russian interference in our election because the goal of the U.S. is to “promote democracy and political liberty and human rights.” Though while America’s actions might be noble and have the sanction of heaven, National Review did concede that its efforts to promote democracy have often been “messy”—an adjective that the people of Iraq might find understated.

Like many of Trump’s critics, National Review’s embrace of American exceptionalism, of exempting the United States from the moral laws of the universe because of its commitment to democracy, is of a type the West has seen before. Swept up in their revolutionary enthusiasm, the French Jacobins made similar claims. In late 1791, a member of the Assembly, while agitating for war with Austria, declared that France “had become the foremost people of the universe, so their conduct must now correspond to their new destiny. As slaves they were bold and great; are they to be timid and feeble now that they are free?”

Robespierre himself was taken aback by the turn of a domestic revolution into a call for military adventurism. Of plans to invade Austria and to overthrow “enemies” of liberty in other nations, he famously remarked, “No one loves armed missionaries.” (Robespierre’s advice might have also benefited the American occupiers of Iraq.) The Jacobins’ moral preening led France to declare war on Austria in 1792 and set in motion years of French military adventurism that devastated much of central Europe. Military imperialism abroad and guillotines at home became the legacy of self-declared French exceptionalism.

Hubristic nations that claim a unique place for themselves high atop the moral universe tend to be imperialistic. This is because claims of national exceptionalism, whether of the French or American variety, are antinomian, even nihilistic. The “exceptional” ones carve out for themselves an exemption from the moral law. And prideful claims of moral purity are the inevitable predicate to imposing one’s will upon another. Once leaders assert that their national soul is of a special kind—indispensable and not subject to the same rules—the road to hell has been paved.

While supporters of American exceptionalism are careful to claim the mantle of Western civilization, their philosophical orientation in fact amounts to a repudiation of the central principles of the West and the Constitution.

For example, the legacy of Pauline Christianity, Irving Babbitt tells us, is “the haunting sense of sin and the stress it lays upon the struggle between the higher and lower self, between the law of the flesh and the law of the spirit.” No person or nation is above this moral challenge. The uniquely American repudiation of exceptionalism shines brightly in The Federalist, where no angels can be found among men, and, because no one’s behavior enjoys the sanction of heaven, extensive checks are placed upon people’s ability to impose their wills upon others. The foreign policy that flowed out of the worldview of the Framers was that of George Washington, a strong recommendation against hubris and foreign meddling.

These historical and cultural warnings about human nature have since been swept away by acolytes of American exceptionalism. Our moral superiority, they claim, makes us Masters of the Universe, not careful and mindful custodians of our own fallen nature. We have been put on earth to judge other nations, not to be judged. Tossing the legacy of the Framers onto the ash heap of history, George W. Bush declared in his Second Inaugural Address that our exceptionalism creates an obligation to promote democracy “in every nation and culture.” In this endeavor, Bush pronounced, the United States enjoys the sanction of heaven, as “history also has a visible direction, set by liberty and the author of liberty.” Bush’s Second Inaugural was probably better in the original French.

Now, the puffed-up American establishment, many of whom supported the bloody Iraq war, drip with moral condescension as they brand Vladimir Putin an existential outlaw and the enemy of democracy, foreclosing the possibility of common ground with Russia on nuclear weapons, China, terrorism, and other issues that matter to the national security of the United States. That Washington has meddled in countless nations’ affairs from Iraq to Russia—and caused untold damage—is of no account to the establishment. Rules do not apply to democracy promoters.

After the Iraq war, we should have reconsidered our hubristic American exceptionalism. One can take pride in the American tradition without laying claim to a uniquely beautiful national soul that is exempt from the laws of nature and of nature’s God. The hysterical reaction to Trump’s truthful admission that the United States too has made mistakes in its relationship with Russia is a sign that American exceptionalism is still in full flower among elites. Without the return of a certain humility, there will be more military adventures abroad and political strife at home.

William S. Smith is research fellow and managing director at the Center for the Study of Statesmanship at The Catholic University of America.