What Dirt Does Russia Have on Barack Obama? 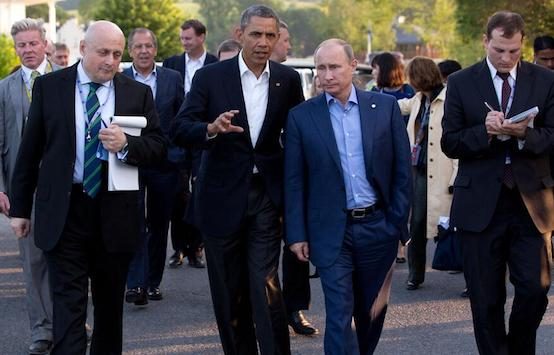 Donald Trump’s refusal to condemn Russia’s alleged interference in the 2016 U.S. presidential election has the usual liberals pronouncing that Vladimir Putin must “have dirt” on the president. Leading this chorus was House Minority Leader Nancy Pelosi who tweeted: “Seriously, what does Putin have on Trump that he’s so afraid?”

I’ll confess that I once parroted that same line. I was especially alarmed by reports that the Trump campaign worked behind the scenes to ensure that the Republican Party platform watered down support for Ukraine, specifically by removing a call to arm Ukrainian government forces in their fight against pro-Russian rebels. That, plus Trump’s refusal to criticize Putin, and my overconsumption of Russia-obsessed MSNBC pundits like Rachel Maddow, led me to the superficial conclusion that, to borrow from Shakespeare and my favorite movie “True Romance,” something was rotten in Denmark.

Then I gave it some more thought.

Yes, Trump has steadfastly refused to criticize—and has even praised—Putin. But he’s also praised a host of far more brutal dictators and strongmen, from North Korea’s Kim Jong-un and the Philippines’ Rodrigo Duterte to the Islamic fundamentalist monarchs of Saudi Arabia. No one is suggesting that any of these leaders “has dirt” on Trump. And besides, the United States has for generations supported some of the world’s most repressive regimes regardless of whether a Republican or Democrat has occupied the White House.

More importantly, even a cursory look at Barack Obama’s policies and actions regarding Russia reveals an inarguably more accommodating stance towards Moscow than Trump’s. From the outset, conservatives derided Obama for his ridiculous “reset” button. Recall, too, that during the 2012 presidential campaign, Obama mocked Mitt Romney when the latter called Russia America’s “number one geopolitical foe,” scornfully retorting that “the 1980s are calling to ask for their foreign policy back because the Cold War’s been over for 20 years.” It was also during that campaign that Obama was caught on a hot mic suggestively promising then-Russian president Dmitry Medvedev that he would have “more flexibility” to consider and presumably pursue pro-Moscow policies after he was reelected.

Even after Russia’s invasions of Georgia and Crimea, and even after he was informed by U.S. intelligence officials that Russia was interfering in the 2016 election, Obama’s response was very measured. Yes, he expelled 35 Russian diplomats. Trump booted diplomats, too, following the alleged Russian bioweapon attack in Britain earlier this year—and he kicked out 25 more than Obama had. Like Trump, Obama sought to publicly downplay the severity of Russia’s actions, reflecting years of general dismissiveness toward Moscow. Yes, Obama slapped sanctions on Russia in response to Moscow’s annexation of Crimea and its alleged election hacking. So did Trump, who not only upheld the previous administration’s Crimea sanctions but upped the ante by imposing strict new sanctions on Russian oligarchs and top government officials, all of them closely tied to Putin.

On foreign policy, while it is true that Obama and Clinton infuriated Moscow by provocatively pushing missile “defense” and NATO expansion to include former Soviet republics and other “near abroad” nations, the Trump administration has taken bold if inadvisable steps that have brought the U.S. the closest to war with Russia that it’s been since the Cold War. Where Obama went to great lengths to avoid killing Syrian government troops and infamously reneged on his “red line” threat, Trump has escalated the war against Islamic State militants in Syria to include multiple bombings targeting large numbers of Assad’s troops, to the point that Russians have also been killed in combat by Americans in Syria. Trump also blew up the Iran nuclear deal, which both Obama and Russia very much wanted to continue.

Let me be very clear: I am no Trump supporter. But because I also didn’t vote for Hillary Clinton and have questioned the dominant Russia narrative, I’ve been called a “Russian stooge” and worse. I can assure you that Moscow has no dirt on me. There is also no evidence that it has any on Trump. And a sober and objective examination of his record beside that of his predecessor will lead any reasonable observer to conclude that Barack Obama’s policies and actions were more conciliatory towards Russia than have been Trump’s.

I do have a gut feeling that something is amiss between Trump and Russia, probably regarding business affairs. But gut feelings shouldn’t form the basis of public pronouncements like Pelosi’s. For a political party that proudly touts its “fact-based” arguments, liberals like Pelosi would do well to look at the facts and ask if maybe it’s not Trump but rather Obama that Russia’s got the dirt on. That last bit might sound ridiculous, but so do the public proclamations about Trump.

Brett Wilkins is a San Francisco-based freelance journalist and editor-at-large for U.S. news at Digital Journal. His work is archived at www.brettwilkins.com.