Argentina says no to legalized abortion as battle moves through region 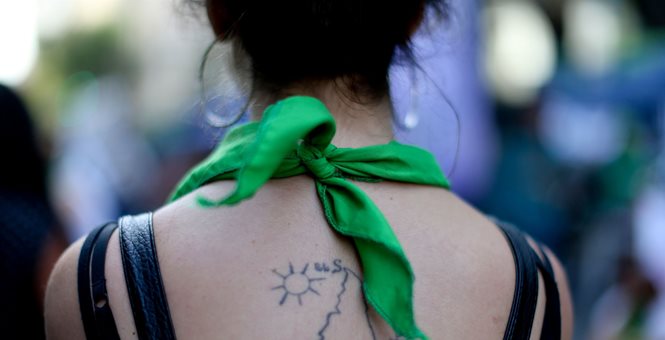 Very early Thursday morning, the Senate in Argentina voted down a bill that would legalize elective abortion. The vote was 38-31, which included two abstentions and one absentee vote. Current law will remain in place which allows abortion in the case of the mother’s health is at risk or rape. Women can be imprisoned for up to four years if the current law is broken.

The proposal would have legally allowed abortion up to fourteen weeks. After the more liberal lower house, the Argentine Chamber of Deputies narrowly passed the bill by a vote of 129-125. President Mauricio Macri said he would not veto the bill if it passed both chambers.

Pro-abortion supporters were buoyed by the vote to legalize abortion in Ireland, also a predominantly Catholic country, last May. Support for the bill was framed in much the same way it is framed through-out Europe and in America. Those in favor describe abortion as a human right and a health care issue. Both descriptions seem ironic to me, though, as the lives lost in an abortion are denied the ultimate right to life and if the concern is health care, legal abortion is allowed in a hospital in the case of the mother’s health or if the woman has been raped.

As expected, the anticipation of the vote in the Senate Thursday morning brought out protesters from both sides of the argument. A large screen outside the National Congress in Bueno Aires building brought the news to the crowd. A heavy police presence tamped down skirmishes as they emerged. Abortion movement leaders from outside the country weighed in. They vow to continue the fight.

Celia Szusterman, trustee of the UK board of Pro-Mujer and director of the Latin America program at the Institute for Statecraft, told CNN that is was “a step backward for women’s rights and women’s health.”

She says it’s a “sad day… not only because of the way the vote went but the way the campaign for and against went. It was so divisive.”

Activists say they’ll keep pushing the bill, in the hope that it passes one day soon.

“It will happen because that’s the world — to increase rights and this is one of the fundamental rights that is still not available to women in Latin America,” Szusterman said.

While pro-abortion supporters chanted “legal abortion at the hospital” outside the National Congress, the Catholic Church held a “Mass for Life” in Buenos Aires. Pope Francis didn’t weigh in during the battle in his native country but he did issue a statement earlier when the bill passed in the lower house. He issued a letter as the debate began earlier this year.

While Pope Francis hasn’t addressed the legislation directly, he did speak out strongly against abortion just days after the bill was approved by the lower house — comparing abortion to avoid birth defects to Nazi eugenics.

The pontiff also issued a letter in March, as the abortion debate began, urging Argentines to “make a contribution in defense of life and justice.”

The movement for legalized abortion is called the green wave and it is spreading across South America. Supporters wear a green bandana as a symbol of the movement and they are now being spotted in Brazil where the legislation is being considered. Last year Chile voted to ease the country’s strict ban.

Supporters of the bill rallied across the region Wednesday, in Chile, Uruguay, Mexico and Peru, as well as across the Atlantic, in Spain.

The vote in Argentina was important because of the scope of those affected. Argentina’s population is the fourth largest in South America and would have become the largest country to allow legalized abortion. With the green wave moved on to Brazil now, legalized abortion has the potential to be allowed in the continent’s most populated country. In the case of Brazil, the proposed legislation would allow abortion up to twelve weeks.

Despite not passing in the Senate, the bill is significant: Argentina is the fourth most populous country in the region and would have become the biggest country to permit abortions. Brazil, the region’s most populous country, is also in the midst of exploring permitting abortion—the Supreme Court held a hearing earlier this week to decide whether to decriminalize it up to 12 weeks.

This would amount to a potential of 126 million women granted the right to legally end a pregnancy in a hospital. Abortion supporters in Chile, Mexico, Peru, Uruguay, Spain all hoped the vote in Argentina would help their path to legalization.

As an American woman, I’m struck by the short window being proposed by these bills. Fourteen weeks in Argentina and twelve weeks in Brazil seem quite restrictive compared to U.S. law. Also, these abortions in South America are intended to be performed in hospitals. Argentina is seen as a leader in the region.

Amnesty International’s Argentina director Mariela Belski explained that “Argentina is a country that has shaped the agenda for the region in terms of human rights,” referring to Argentina leading the way in legalizing same-sex marriage. And according to an Amnesty survey, 60% of Argentinians are in favor of abortion. The fight might not be over yet.

The legal battle moves on to Brazil now. Let’s hope for a similar outcome.