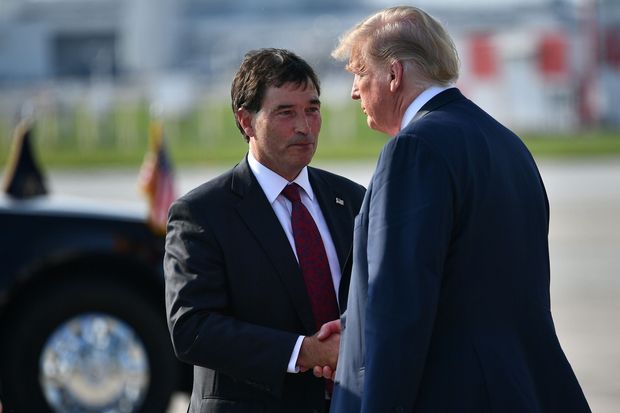 Republicans on present trend are poised in November to lose their majority in the House of Representatives and a slew of governorships. That’s the clear message from Tuesday’s election contests and a growing body of evidence. The President’s persona is trumping positive policy results among voters, and without some intervening news or a change in strategy the result is likely to be a national left turn.

Republicans appear to have won a narrow victory in the special House election in Ohio, with provisional and absentee ballots still to be counted. But a win of less than 1% in a heavily Republican district is hardly a show of strength. The Democratic share of the two-party vote surged as it has in every special election this year, while GOP State Senator

Balderson was crushed in Franklin County around

The ominous news for Republicans is that they hold about 68 House seats that are less Republican than this Ohio district. Most include stretches of suburbia that have been GOP strongholds but where many voters dislike

abrasive style and polarizing governance. Democrats need to pick up 23 seats to regain the majority they lost in 2010, and three or four times as many seats could be in play in November.

a member of the House leadership, barely led the top Democratic vote-getter in a jungle primary in her Spokane seat with 47.5%. She remains a modest favorite in the autumn, but the seven-term incumbent will have to spend heavily to win.

As for the statehouses, Democrats won 137,000 more votes than Republicans in the primary for Governor. Michigan Attorney General

wrapped himself around Mr.

for the GOP nomination, but Mr. Trump’s approval rating in the state was 35% in the latest Marist poll. Democrats nominated career politician

over a leftist candidate favored by

The same goes for Kansas, of all places, if Trump-endorsed

maintains his 191 vote lead over

in the GOP Governor’s race.

resigned to work in the Trump Administration.

will have to persuade Republicans in Johnson County in the Kansas City suburbs that he cares about more than deporting illegal immigrants.

apparent Ohio victory, and perhaps his visit to the district Saturday evening motivated some GOP voters. But his omnipresence also motivates Democrats, while it may de-motivate soft Republicans and independents who dislike Mr. Trump.

of the Tarrance Group says that his surveys show about 31% to 33% of voters are solidly in Mr. Trump’s camp. Another 11% or so have some doubt about his persona but put a priority on his policies and their success so far. This explains the President’s approval rating of 44% or so. But another 10% of voters like his results but emphasize his persona and thus disapprove of his job performance.

This last group are the swing voters GOP candidates need in suburban districts to keep the House. They aren’t impressed by Mr. Trump’s name-calling, his brawls with the media or taunts of LeBron James. They don’t like the debacle of family separations driven by immigration-enforcement obsessives inside the White House.

Trade protectionism also doesn’t help among Republicans who work in large companies (and live in those swing districts) and are beginning to see the cost of tariffs. GOP policy successes on the economy and taxes are drowned out by the Trump cacophony.

In this political environment, even the GOP’s Senate majority isn’t safe. Only three or four GOP seats are in play, but the party could lose Nevada, Arizona and Tennessee. Republicans need to defeat Democratic incumbents to hold the Senate, which isn’t easy in this kind of year.

Our sense is that Republican voters haven’t recognized how much jeopardy the party is in. Many are content to listen only to their safe media spaces that repeat illusions about a “red wave” and invoke 2016 when the media said Mr. Trump couldn’t win. Nearly all of the media does want Democrats to win again, and humility was one of the lessons we learned from the surprises of 2016.

But that’s not an excuse for ignoring the evidence of GOP trouble. Mr. Trump barely won in 2016 against the weakest Democratic candidate since

isn’t on the ballot this year.

who lost his Michigan primary for Governor, said Wednesday by way of explanation that “this is President Trump’s Republican Party.” The question to be answered in November is whether it remains a majority governing party.