Tuesday Night Is a Bad Sign for Republican House Chances 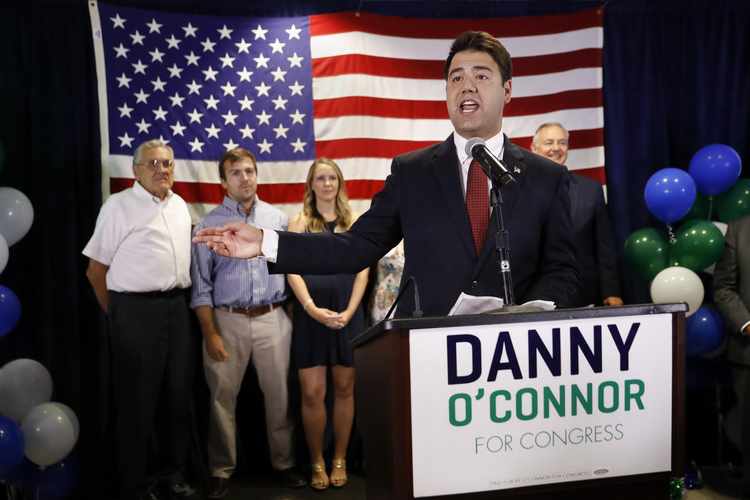 On its face, Tuesday night seemed uneventful, or even good news for the Republican Party. Aside from a few primaries here and there, the main event was the House special election in Ohio’s 12th Congressional District. Republican candidate Troy Balderson appears to have narrowly defeated Danny O’Connor (pending a count of around 3,500 provisional ballots).

But the truth is more complicated. The results were fully consistent with a Democratic wave in the house washing up on our shores in November. While there’s still time between now and then, there’s not a lot of time, and we’re at the point where these elections start to be very suggestive, if not fully predictive.

Start with Ohio. This is a Republican district. Overall it leans Republican by seven points. There are around 60 GOP-held districts that are less Republican than this one. A Democrat has won this area of the state just once since the Great Depression. The last time this seat was open, in 2000, the Republican won by 10 points, and the district has been made substantially more Republican since then. In short, Democrats had no business being competitive here, even with a good candidate in O’Connor (pictured).

What happened here? Two things. First, turnout was down in the rural portions of the district, compared to the urban areas. Franklin County (Columbus) cast around 35 percent of the vote Tuesday, as compared to 32 percent in 2016. That’s not a massive difference, but it is indicative of greater energy on the Democratic side.

Second, the Democrats’ vote share was up in the urban and suburban areas. Balderson ran narrowly behind Rep. Pat Tiberi’s 2016 showing in the rural areas, receiving, for example, 70 percent of the vote in Morrow County to Tiberi’s 80 percent. But that can be ascribed to Tiberi’s lack of a serious opponent, and isn’t that far off of Trump’s 75 percent in that county.

Franklin County, however, was a different story. This portion of the district contains a lot of the older suburbs of Columbus – places people moved to in the 1970s and 1980s, but which are increasingly difficult to distinguish from the city – as well as some “1950s” suburbs and university areas. Tiberi won 59 percent of the vote here; Balderson won 35 percent.

Or take Delaware County, where much of the new suburban development in Columbus is occurring. This is one of the most reliably Republican areas of the state; it hasn’t voted for a Democrat for president since 1916. Republican Ken Blackwell lost the 2006 gubernatorial race by 24 points statewide, but only narrowly lost Delaware County. Pat Tiberi won 74 percent of the vote in Delaware, while Balderson won 54 percent.

Now let’s consider Washington state, where about two-thirds of the mail-in ballots are counted. As I’ve noted repeatedly, the Washington primary, where all candidates run on the same ballot and the top two advance regardless of party, is absolutely predictive of outcomes there in the fall. The trend is that, in the general election, Democrats run a couple of points ahead of their combined showing in the primary.

So it isn’t a great sign for the GOP that Democrats combined to run three points ahead of Republicans in the 8th District – something of a Seattle analogue to Ohio’s 12th. Of more concern for the GOP: Republicans ran only a half point ahead of Democrats in the 3rd District, which leans Republican by about four points and had previously been considered uncompetitive. In the 5th District, which leans Republican by eight points, Republicans seem to have combined for 50.5 percent of the vote.

This is all of a piece with the intuition nationally that college-educated whites are turning away from the Republican Party in reaction to Donald Trump’s presidency. I’m a staunch opponent of “Demographics are destiny” takes, but the GOP cannot function simply as a party of working-class whites and expect to win many elections (of course, I’m not sure Democrats can hold together a coalition of urban liberals, college-educated whites, and various minority communities, but that’s a story for another time). With the economy growing, there really is no reason Republicans should find themselves in this predicament, but the erratic nature of the Trump presidency seems to be filtering down-ballot.

If there’s an argument to be made in the Republicans’ favor, it is that the incredibly high level of Democratic enthusiasm is skewing these results in primaries, reversing the trend where Democrats tend to perform better in the general. Perhaps Ohio’s 12th wouldn’t be a nail-biter in a general election, but rather would be more like a four-to-five-point win. Maybe Democrats won’t get their traditional boost over primary turnout in places like Washington and California.

Maybe. It’s not a terrible argument, and there’s perhaps some evidence for it in the special election results. But as I’ve said before, “this time is different” has a lousy track record. This also misses the forest for the trees. If we really are talking about Republicans marginally overperforming the primary vote in Washington’s 3rd and 5th districts on Election Night, it doesn’t bode well for what is occurring elsewhere.