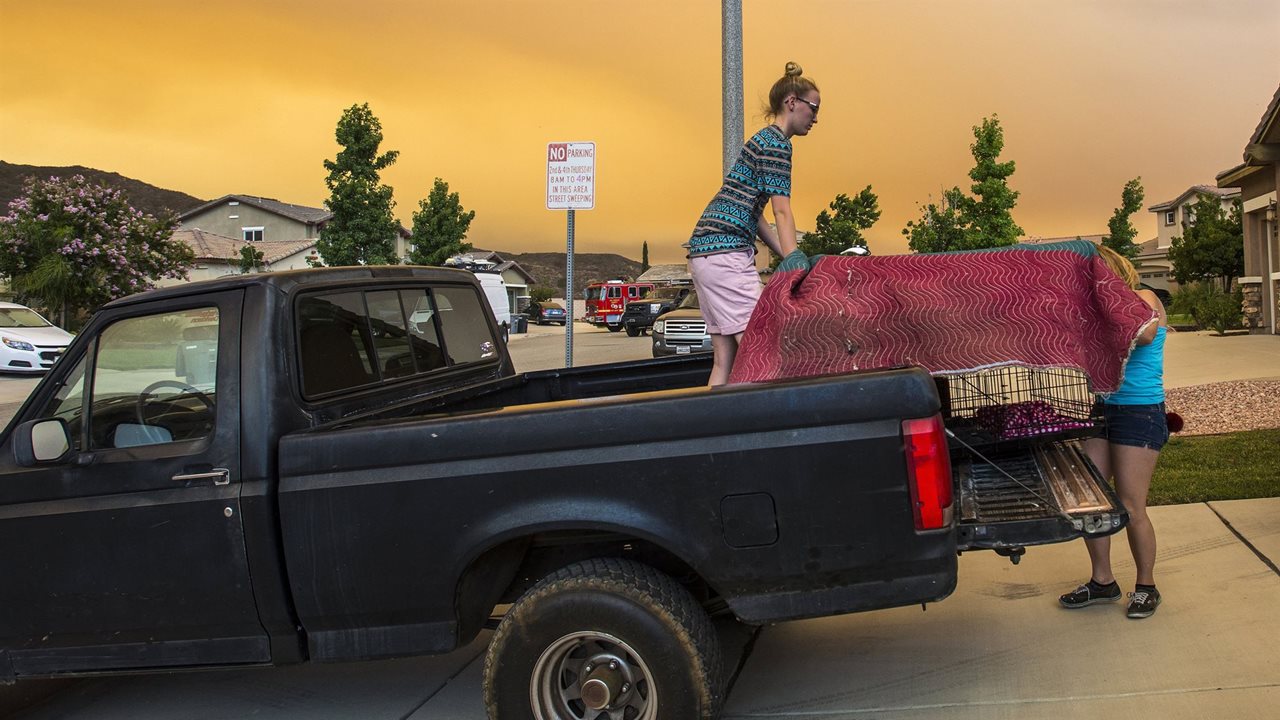 LOS ANGELES (AP) — An intentionally set wildfire grew perilously close to homes in Southern California on Thursday as evacuation orders expanded to more than 20,000 residents, though some homeowners stayed behind to fend off the flames themselves.

Firefighters fought a desperate battle to stop the Holy Fire from reaching homes as the blaze surged through the Cleveland National Forest above the city of Lake Elsinore and its surrounding communities. They were trying to keep the flames from devouring neighborhoods and taking lives, as gigantic fires still burning in Northern California have done.

“Our main focus this afternoon was getting everyone out safely,” said Thanh Nguyen, a spokesman for the crews battling the Holy Fire.

Gov. Jerry Brown declared a state of emergency for Orange and Riverside counties because the fire threatened thousands of homes. The proclamation directs state agencies to provide help to local governments.

As flames raged closer, some residents ignoring evacuation orders stood in driveways or on top of roofs and used garden hoses to keep their homes wet and to fight the flames as smoke billowed around them.

Joe Rodriguez was using a power washer to wet down his patio in the McVicker Canyon Park neighborhood on Thursday morning.

Although the neighborhood is under an evacuation order, the 38-year-old Rodriguez told the San Bernardino Sun that he decided to stay to help save his home.

“Until this thing is barking at my door, I’m going to stick with it,” he said.

He said a line of fire retardant dropped on the hill above his house has so far checked the fire’s advance, along with helicopter water drops.

Lake Elsinore Mayor Natasha Johnson and her family were among the families evacuating Thursday, Councilman Bob Magee said at a community meeting about the fire.

Earlier in the day, Johnson told residents in a video posted on Twitter to stay vigilant and listen to evacuation orders.

“Stay safe,” she said as smoke billowed behind her. “God bless.”

Magee told residents at the community meeting to follow the mayor’s example and listen to evacuation warnings and orders.

“I also want to remind you not to panic,” he said. “We are in great hands, the best in the world.

Fire crews worked in 100-plus-degree (38 Celsius) heat. Aircraft dumped bright pink lines of fire retardant to wall off the fire from homes. The 16-square-mile (41-square-kilometer) blaze was only 5 percent contained.

The fire is named for Holy Jim Canyon, where it erupted Monday and burned a dozen cabins.

A resident of the canyon, 51-year-old Forrest Gordon Clark, was charged Thursday with arson and other crimes that could send him to prison for life.

Clark refused to go to court Thursday and his arraignment was postponed to Friday. It’s unclear whether he has an attorney.

Winds gusting to nearly 20 mph (32 kph) at times drove the fire through dense chaparral on the foothill slopes and along ridgetops, sending up an enormous column of smoke that smeared the sky for miles around.

The fire threatened communities near the inland resort of Lake Elsinore in Riverside County, about 70 miles (113 kilometers) southeast of Los Angeles.

Hot temperatures, erratic and gusty winds, and tinder-dry vegetation are the same conditions that caused wildfires in Northern California to explode into deadly conflagrations in the space of two weeks.

North of San Francisco, fire crews continued progress in corralling the twin fires known as the Mendocino Complex. Since starting on July 27, the fires — which are being fought together as a single incident — have destroyed more than 100 homes near Clear Lake and become the largest fire in recorded state history.

The area burned by the blaze is now larger than the cities of Los Angeles. The fires were 51 percent contained.

In the Redding area, the year’s deadliest fire was nearly half surrounded and was burning into remote and rugged forest land but grass, brush and trees there are so dry from years of drought and recent heat that the potential remained for the fire to grow, state fire officials said.

The Carr Fire, as it’s called, killed six people, including two firefighters, and burned more than 1,000 homes. Two other people — a state fire heavy equipment mechanic assigned to the fire and a utility worker trying to restore power near the fire— have died in car accidents.

Michael Balsamo and Christopher Weber in Los Angeles contributed to this story.