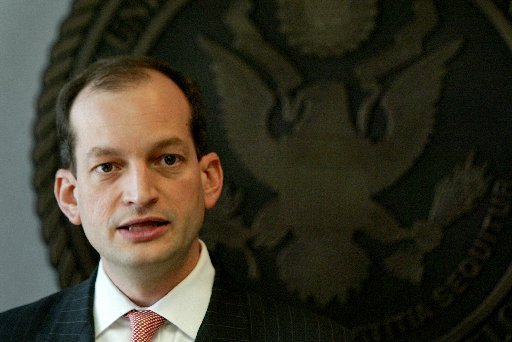 Secretary of Labor Alex Acosta has done almost nothing to disturb the hard-left agenda implemented by his predecessor, Tom Perez. Thus, it’s not surprising that he’s receiving praise from a key member of the Perez team.

Acosta understands how government works, he has no interest in blowing up the structures and processes of government, did not enter government with either a clear conservative or reactionary labor agenda, and has been extraordinarily cautious both to make sure he is giving the White House what it wants and also to avoid making negative headlines.

The quote from Harris appears in an article by Bloomberg’s Ben Penn. The article describes a clash between Acosta and James Sherk, a conservative who has the DOL portfolio at the White House Domestic Policy Council. They clashed over DOL’s delay on various regulations, including a more moderate version of an Obama-era rule expand workers’ access to overtime pay, and an anticipated effort to take a closer look at union and worker center finances.

Add these items to the list of areas I’ve flagged in which Acosta has been unwilling to act.

[Acosta] is much more cautious [than Sherk]. He is also very much motivated by what he sees as being politically popular on the Hill. There were several things in the regulatory space that we tried to push him on last year that he pushed back on us on just purely out of, `Well I don’t want to tackle that political challenge right now.’

Stated plainly, Acosta won’t disturb the radical Obama-Perez agenda because he wants to be popular with Democrats. Just as I predicted when he was nominated.

That’s why conservatives are disgusted with Acosta, though few want to say so on the record for fear of alienating the influential friends he made in the 1990s, before he began currying favor with liberals. And that’s why leftists like Harris are delighted with Acosta.

The dichotomy between Sherk and Acosta tells us that President Trump abandoned plans for a radically reactionary labor agenda after his nomination of Andrew Puzder for Secretary of Labor went down in flames.

Trump was the victim of very bad advice. Now he has too many things on his plate to worry about the Labor Department. Thus, we’re stuck with Alex Acosta unless and until he parlays his hard-won popularity on the Hill into the high-level federal judgeship he undoubtedly covets.