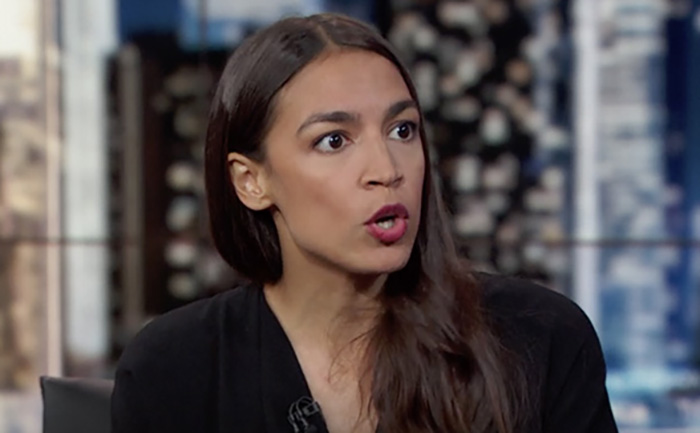 Alexandria Ocasio-Cortez, girl socialist, may know what the Gini coefficient is, but she doesn’t know much else. The Washington Post fact checked a series of recent claims by Ocasio-Cortez and found all of them to be false.

Let’s look at each claim:

Wrong. Bureau of Labor Statistics data shows that the percentage of people working two jobs has actually declined since the Great Recession. It hovers at around 5 percent these days. And the average hours worked per week for private employees has remained steady at just under 35 hours for years, says the Post.

2 “ICE is the only criminal investigative agency, the only enforcement agency in the United States, that has a bed quota. So ICE is required to fill 34,000 beds with detainees every single night and that number has only been increasing since 2009.”

Wrong. At one point, ICE had to have 34,000 beds available — ICE “shall maintain a level of not less than 34,000 detention beds through September 30, 2016” — but it was not required to fill them. Now the requirement even to have the beds does not exist.

Wrong. The study showed that Medicare for all would raise government expenditures by between $32.6 trillion and $40 trillion over 10 years.

5. “The reason that the Supreme Court upheld the Affordable Care Act is because they ruled that each of these monthly payments that everyday American make is a tax. And so, while it may not seem like we pay that tax on April 15th, we pay it every single month or we do pay at tax season if we don’t buy, you know, these plans off of the exchange.”

Wrong. In the opinion by Chief Justice Roberts that Ocasio-Cortez has in mind, Obamacare was deemed to be an appropriate exercise of the government’s taxing power. But Roberts wasn’t referring to the monthly premium payments, but rather to the individual mandate to buy insurance — and the requirement to pay an annual penalty when filing a tax return if one did not buy health insurance.

Clearly, Ocasio-Cortez is a dope. Is she also a liar? I don’t know, but she sure has little regard for the truth.