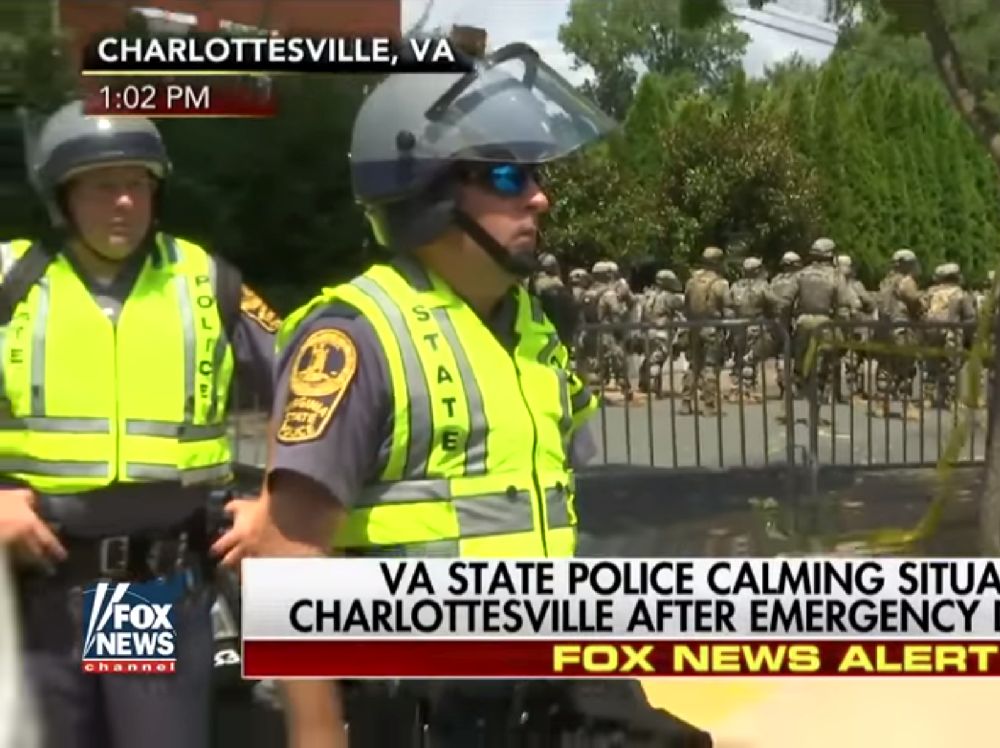 CHARLOTTESVILLE, Va. — A year after violent brawls and a vehicular homicide marked a neo-Nazi rally in Charlottesville, Virginia, the town is shutting itself down for three days. Is this because the Nazis are coming back? No, it’s because they might come back, a speculation that is spinning a fair number of people around here into a full-blown panic.

I realized this when I discovered that the gym I usually go to is shutting down for the whole weekend, because it’s sort-of kind-of not very far from the site of last year’s riots. Maybe they decided to do it because basically the entire downtown of the city is going on lockdown.

The city … has banned anything that could be construed or used as a weapon, from glass bottles to camera tripods. Police will either block off or man blockades at all downtown intersections between High Street and Water Street, from McIntire Road/Fifth Street to Avon Street.

Only two police-manned checkpoints will be available for pedestrians seeking access to the Downtown Mall and Market Street and Court Square parks. Police have said they will confiscate any banned items.

An estimated 700 Virginia State Police personnel are expected to join more than a hundred local police and up to 300 Virginia National Guardsmen are in the area or ready to be mobilized.

Why this massive police-state crackdown?

Although white supremacist organizations have not officially scheduled any events in the area, police and activists have expressed concerns that some may show up on the anniversary.

Sure, maybe this is just an abundance of caution on the part of state and local police who utterly failed to prepare for last year’s rally and to keep the two violent sides separated. But then how do you explain stuff like this: “Throughout the day on Thursday, reports surfaced from concerned citizens who believed they saw persons resembling Nazis and white supremacists in locations from office supply stores to coffee shops.”

Who is a “person resembling a Nazi?” How do you define that? I just got a really short haircut, because it’s 95 degrees out. Would that make me “look like a Nazi?” Probably not, because I’m not a hipster, so I had my barber blend the sides. I’ll avoid coffee shops and office supply stores, just in case. But the suspicious haircut thing is a real hysteria, and people calling the cops because they saw a guy with an undercut gives you an idea of the kind of “The Monsters Are Due on Maple Street” paranoia going on here.

It’s all misplaced. I know everyone has been eager to use last year’s riots to demonstrate how brave they are to oppose Nazis, seventy years after it took any real courage to do so. But what last year actually proved is that in all of North America, the most you can gather together are about 300 white nationalists. Richard Spencer couldn’t get audiences to show up for his college speaking tour. His only talent is a flair for the theatrical, and he knew what kind of photo would end up on the cover of every newspaper in the country. But all he managed to do was to manipulate the press into amplifying a tiny movement that is probably best allowed to fester in obscurity.

Maybe some Nazis will show up again this weekend. But if there are any clashes, they are more likely to be between this massive police presence and leftist counter-protesters with nothing to counter-protest, than to involve Nazis.

‘This state of emergency is an over-compensation for the failures of the state last year,’ said the Rev. Brittany Caine-Conley, an organizer with Congregate Cville. ‘We know, statistically, historically and anecdotally, that state repression and violence overwhelmingly affect marginalized communities. This militarized landscape will only do more harm to those who have been most significantly wounded in the past year.’

So I guess the message is: clamp down on the Nazis, just don’t use the police to do it. Liberal activists are also upset at the quartering of troops in university housing, which would probably set off the Third Amendment lobby, if not for the fact that the dorms were already empty for the summer.

It would be a supreme irony if the only news out of Charlottesville this weekend turns out to be scuffling between two groups—the police and Black Lives Matter or Antifa—who are both there to guard against the empty specter of neo-Nazis.

It’s already clear that we’ve worked ourselves into such a frenzy of paranoia that the Nazis don’t even need to show up to disrupt the whole town. This is a reflection of the bigger picture, in which we have let a few hundred creeps exploit our bitter political divisions to disrupt the entire country.