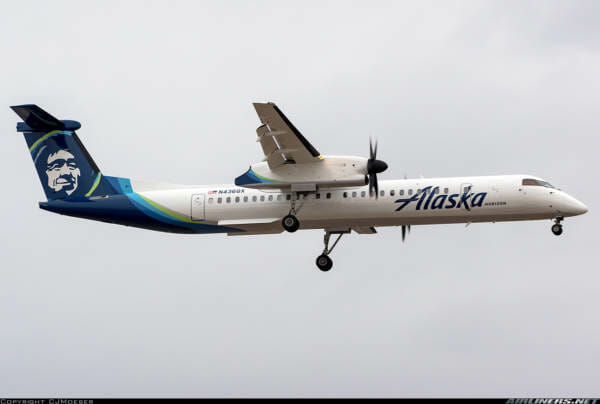 “I got a lot of people that care about me, and, uhh, it’s going to disappoint them to hear that I did this” says the hijacker of a Bombardier Dash 8 Q400, who stole it out of Sea-Tac airport, just south of Seattle. F15’s scrambled to intercept. The plane went down into the south end of Puget Sound. All flights out of Sea-Tac were grounded for some time, while incoming flights were diverted, and others were held at their departure points.

An airline employee conducted an unauthorized takeoff without passengers at Sea-Tac; aircraft has crashed in south Puget Sound. Normal operations at Sea-Tac Airport have resumed.

Some folks captured video of the plane, as apparently the hijacker wanted to practice some maneuvers, with the F15’s closing in.

Some dude stole a plane from #Seatac (Allegedly), did a loop-the-loop, ALMOST crashed into #ChambersBay, then crossed in front of our party, chased by fighter jets and subsequently crashed. Weird times. pic.twitter.com/Ra4LcIhwfU

@KING5Seattle here’s a video of the hijacked plane and fighter escort from Steilacoom in the ferry line for anderson Island pic.twitter.com/8fgAUe05xv

The plane was one of many Q400’s in Horizon Air’s fleet, a regional subsidiary of Alaska Airlines.

We’ve confirmed a Horizon Air Q400 that had an unauthorized takeoff from SeaTac around 8pm has gone down near Ketron Island in Pierce County, WA. We’re working to confirm who was on board, we believe there were no guests or crew on board other than the person operating the plane.

Someone recorded much of the radio communications with air traffic control. “I got a lot of people that care about me, and, uhh, it’s going to disappoint them to hear that I did this,” the man, later identified as a mechanic named Rich, can be heard saying. “I would like to apologize to each and every one of them. Just a broken guy, got a few screws loose, I guess. Never knew it, until now.” He would go on to ask if the plane could to a BACKFLIP.

At one point, “Rich” says “I think I’m gunna land it, in a safe kind of manner. I think I’m gonna try to do a barrel roll, and if that goes good, then I’m just gonna nose down and call it a night.”

Law enforcement personnel say the man was suicidal and acting on his own.

The Seattle Post Intelligencer parsed out portions of the radio comms, where the man in the plane can be heard saying “It’s a blast man. I’ve played video games before, so, I know what I’m doing a little bit.”

Apparently ATC tried to guide the man back to the runway. “Rich” was concerned with serving life in jail.

Here’s an image of the plane’s flight path.

The plane eventually crashed, and “Rich” is presumed dead.

Seconds after the plan crashed pic.twitter.com/SgxmAr66WG