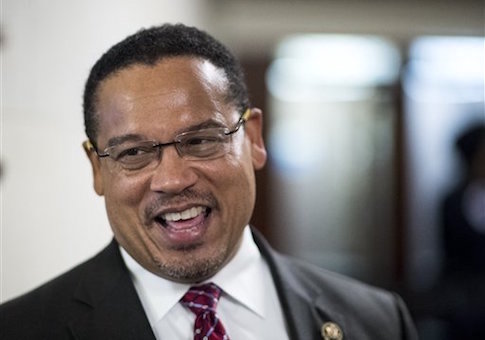 .@keithellison categorically denies #MeToo  assault allegations leveled against him by former girlfriend, allegations surfaced 2 days before critical primary in which Ellison faces competitive run for Mn Attorney General after giving up safe US House seat @wcco will have details pic.twitter.com/FRjGEKzSFU

Note how Ellison focuses on the video that Monahan’s son, who broke the story on Facebook, claims to have. That is the strangest aspect of Austin Monahan’s story; it is hard to see how a video of Ellison abusing Monahan would have been filmed. Ellison’s strategy, perhaps, will be to focus on the non-existent video and try to sidestep the actual allegation.

Good luck with that. More to come.

UPDATE: The Minneapolis Star Tribune has weighed in with a news story that is pro-Ellison. It highlights his denial, quotes Ellison’s ex-wife Kim who vouches for his character, and, most important, raises questions about the evidence supporting Monahan’s claims that her son claims to have seen:

A Star Tribune reporter went to Karen Monahan’s apartment on Sunday, and spoke through a call-box to a woman who said yes when asked if she was Karen. She said she was not ready to talk to and is focused on her kids and family at this moment. “This is a really difficult time,” she said.
***
Austin Aslim Monahan said in an interview Saturday night that he is not in possession of the video he said he saw in 2017. He stood by the veracity of his Facebook post.
***
A search of court records finds no report of any incidents between Monahan and Ellison. Monahan, who is an organizer for the Sierra Club, has made numerous Twitter posts in recent weeks about being in an abusive relationship, and more broadly about the MeToo movement; but before Saturday, she never identified Ellison in those posts.

Minnesota Public Radio News reported Sunday that it had reviewed more than 100 texts and Twitter messages between Ellison and Monahan, that she provided to the station. None included any evidence of the alleged abuse, according to the report, characterizing some as friendly and others as more combative.

Of course, in most #MeToo cases there are no corroborating videos, text messages and so on. It will be interesting to see what Minnesota’s Democrats make of this story; we should know in about 48 hours.

One more thing: as in many other states, early voting has become common in Minnesota. Undoubtedly there are Minnesota Democrats who cast early ballots for Keith Ellison and now wish they could recall them. Early voting is, I think, pernicious and should be resisted and rolled back.

MORE: MPR News also has a story on the domestic assault allegation. Its tenor is similar to that of the Star Tribune article. It adds the fact that more than 100,000 votes have already been cast in advance of Tuesday’s primary election.

STILL MORE: Ms. Monahan is tweeting about the controversy here. She posted a text exchange between Ellison and herself that does not specifically refer to domestic abuse but certainly hints at it. It is also now clear that a succession of tweets about domestic abuse, #MeToo, etc. over the past several months included references to Ellison, although she did not name him. Things like this:

the misogyny and cheating put mine and several other women’s health at risk. Three different people in a 2 week time span, sending us the exact same recycled text, one after another. I was so scared for my health. He put us all at risk. He felt entitled and had no remorse