You may have noticed that liberals don’t seem to like white people who aren’t liberals very much. Many liberal minorities now regularly aim vicious attacks at white men in particular or white people as a group. You might think this would bother white liberals, but many of them actually echo those attacks, presumably in the errant hope that they’ll be looked at as one of the “cool white people” by many of their Caucasian-hating minority comrades. Not only is there no penalty on the Left for racist attacks on white people, but aiming vile hatred at white people based on the color of their skin is actively defended by liberals.

But, you don’t even have to take my word for it because here’s famous liberal pundit Andrew Sullivan admitting that it’s true,

“Scroll through left-Twitter and you find utter incredulity that demonizing white people could in any way be offensive,” he said. “That’s the extent to which loathing of and contempt for ‘white people’ is now background noise on the left.”

The latest example of this is Sarah Jeong. She’s an Asian tech writer who was hired by the New York Times. After some people looked at her tweets, they discovered that she really seems to hate white people with a vengeance. 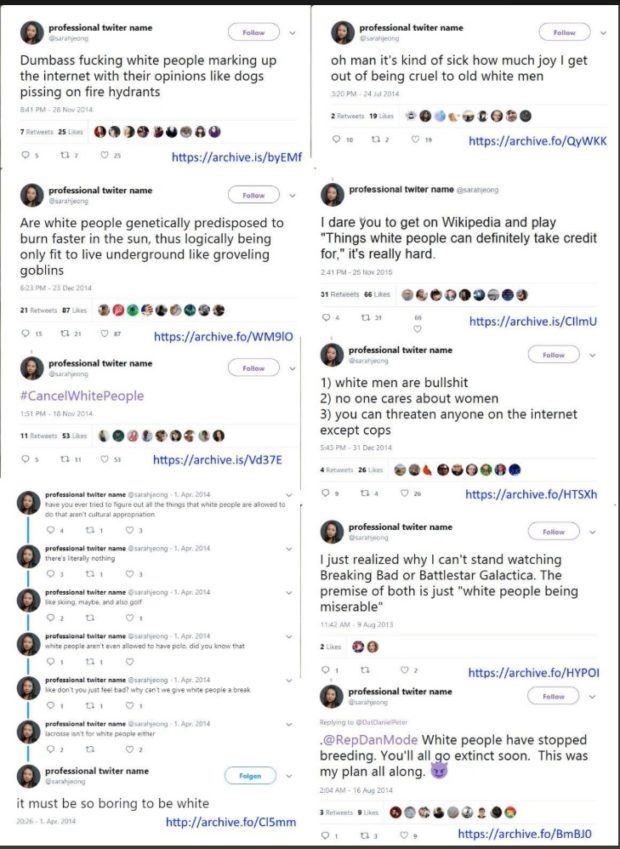 Incidentally, Jeong has hundreds of more tweets like this. This is someone who is being defended almost (but, not quite) universally on the Left. Worse yet, the liberal response to this kind of open racism is that there’s nothing wrong with it. For example, here’s the all-too-typical take on the Jeong controversy from one of the liberal wonks at Vox:

This is, incidentally, why you hear a lot of people on the social left say there’s no such thing as ‘reverse racism.’ We interpret language through social context. Because of the way racial power structures are set up, the same set of words mean very different things when you swap out ‘white people’ for ‘black people,’ ‘Asians,’ ‘Jews,’ etc. The phrase might be racist in one context, in the sense of conveying actual racial animus, but not in another.

Of course, back in the real world, “power structures” have absolutely nothing to do with whether you hate someone for the color of his skin. For example, a white unemployed high school dropout who joins the KKK is never going to be excused for his racism by a liberal because he has no power. In that case, racism has nothing to do with “power” as far as liberals are concerned. Yet by any rational standard, that racist Cletus has a lot less power than someone like Sarah Jeong, who went to Harvard and is on the editorial board of the New York Times.

Liberalism is now full of people like Sarah Jeong who are excused for nursing racial grievances despite the fact that they are influential, privileged, and by any reasonable standard much more powerful than the average person. These are people who aim hatred toward white people because of the color of their skin, and then we’re told that they can’t be racist because minorities have no power in a country where a black man just spent eight years as president of the United States. Jesse Jackson has no power? Al Sharpton? Ta-Nehisi Coates? Julian Bond? Leonard Pitts? Marc Lamont Hill? Charles Blow? Cornel West? Shaun King? Aiming hatred at white people is an industry in the United States and it pays well in money and attention.  That’s why it’s such a growing field on the Left.

So, if you’re someone who is hated by a political party because of your skin color, what do you do about that?

Liberals certainly express a point of view about what minorities should do in that situation. They habitually falsely accuse Republicans of hating minorities and then say that means those voters are crazy if they don’t vote for them. Of course, their claim is not true. Conservatives overwhelmingly believe in judging people as individuals, by the content of their character rather than the color of their skin. Still, this is how Democrats approach this issue.

So, should white people abandon the Democrats who hate their guts? Yes, they should. Why vote for someone who defends people who hate you because of the color of your skin? Why should any individual have to be a groveling apologist because he was born a certain color? Why support a party that is prejudiced against your white child because of the color of his skin?  These guys are aiming the same kind of hate at white people as their ancestors used to do at black Americans — and if you’re a white American who just shrugs your shoulders at that, you’re foolish.

“The angry white guy is dying out, and the Census Bureau has already told us that by 2050, white people are going to be the minority, and I’m not sad to say I can’t wait for that day to happen. I hope I live long enough to see it because it will be a better country.” — Michael Moore

It would be a better world if we could all agree that we should judge each person as an individual, but that’s not the world Democrats want to live in. They want to live in a world where people’s accomplishments, character and beliefs are secondary to the color of their skin. It’s too bad that they chose to embrace that kind of racism and they don’t deserve your support unless they move away from it.