A Lifeline for Turkey 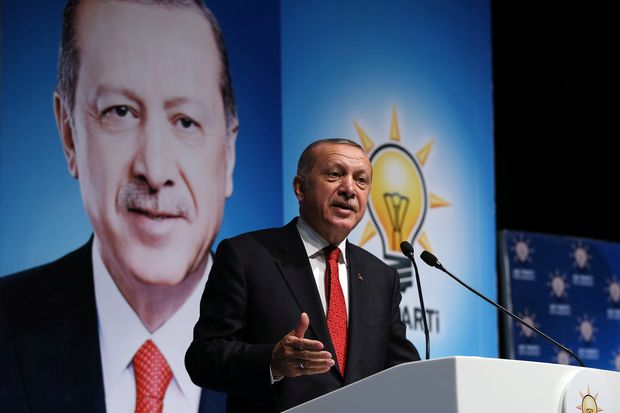 is lashing out at

financial markets, the almighty U.S. dollar and anyone else he can find to assign blame for his country’s currency and debt crisis. Someone should introduce him to economist

who is offering the Turkish strongman the best lifeline available to stop the panic.

Turkey is confronting a run on the lira of the kind the world has seen many times in emerging markets. A country borrows too much to spur growth in an era of low interest rates and easily available credit. Much of that debt is in U.S. dollars, but the cash flow to finance it is earned by local companies in local currency. By some estimates about half of all Turkish debt is owed in hard currencies.

Mr. Erdogan is blaming Donald Trump’s sanctions and tariffs for the lira crisis, but the U.S. President was lighting a match on already dry tinder. The core problem is years of monetary mismanagement and overborrowing. The Turkish strongman wanted to win an election to change the constitution and consolidate his power, and he leaned on the central bank to keep interest rates low. He won his election but like most authoritarians he thinks he can bully markets the way he does the military.

Mr. Erdogan is floundering for a solution. He wants Turks to buy lira with their gold and hard currency, but that would make more Turks poorer as the lira keeps falling. He claims he won’t let interest rates rise, but the central bank will have little choice other than to raise rates to stop the panic. He also says he won’t accept an international bailout, though unless he stops the panic he will have to come begging to the International Monetary Fund (IMF).

Enter Mr. Hanke, who nearby offers the monetary rescue known as a currency board. The idea is to restore confidence in the lira by fixing the currency to a foreign-currency anchor. A country that adopts a currency board essentially abandons control of discretionary monetary policy. It adopts an exchange-rate policy by linking to a hard currency with more credibility. For Turkey at the current moment, that would mean linking to either the euro or the dollar.

This would be humbling for a proud man like Mr. Erdogan to accept, but the irony is that linking to the dollar would be his best protection against the unpredictable policies of Mr. Trump. As long as Turkey has a fiat currency, Mr. Trump can use tariffs and sanctions to fuel the panic. But the U.S. President doesn’t control U.S. monetary policy.

Once confidence in Turkey’s monetary policy is restored with a dollar or euro link, the lira won’t move. Mr. Erdogan and his advisers can focus on fixing their other economic problems, such as overborrowing and spending. This solution certainly beats going to the IMF, which will offer its patent medicine of fiscal contraction, and perhaps capital controls.

Mr. Trump might not realize it, but a Turkish currency board would also work best for the U.S. The President seems to be enjoying Mr. Erdogan’s pain so he can win the return of American pastor

who has been unjustly held in Turkey.

But Mr. Trump has a larger interest in avoiding financial contagion to other countries from the Turkish crisis. The U.S. isn’t an economic island and needs the world to prosper if he wants to maintain the 4% U.S. growth of the second quarter. The world is awash in dollar debt after a decade of quantitative easing that has kept interest rates artificially low, and a currency crisis could quickly become America’s problem. The U.S. Treasury should also get Mr. Hanke on the phone.