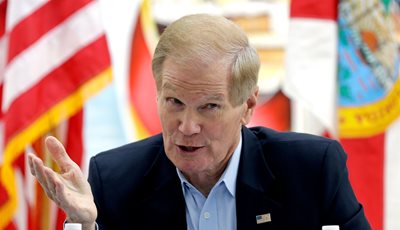 Floridians go to the polls for their midterm primaries in two weeks, and the electorate looks surprisingly the same as it did two or four years ago. Despite predictions of a “blue wave” in this purple state based on reaction to Donald Trump and the disaster response in Puerto Rico, Democrats didn’t make any gains in their share of the electorate. In fact, as Politico’s Marc Caputo reports, they lost ground:

Last week we wondered “where’s the blue wave?” when Democratic absentee ballot returns weren’t as proportionately high as they were at this time of the election in 2014, the last midterm. Today, we begin to wonder even more now that the state has released the final numbers of registered voters for the August 28 primaries. The numbers show that, as a share of the electorate, Democratic Party registrations have fallen about 2 percentage points since the 2016 election (to roughly 37 percent). Registered Republicans have held steady at 35 percent. And no-party-affiliation voters have increased about 3 points. True, Democrats have won four contested bellwethers this cycle in Florida. But so far, there’s not a crush of people rushing to become Democrats.

Analysts predicted a much bigger bump in the Sunshine State, and not just from dissatisfaction from Trump’s first two years as president. The disaster response in Puerto Rico has been a big controversy in the state among the substantial portion of the Hispanic demographic that Puerto Rico natives comprise. On top of that, the economic devastation presumably resulted in a flood of people moving into the state from Puerto Rico, and as American citizens they would be eligible to cast votes in the midterms. If that happened, however, they didn’t register as Democrats:

After Hurricane Maria last year, Democrats hoped the sizable influx of Puerto Ricans who evacuated the island would help change the demographics of the Florida voter rolls, and therefore the 2018 elections and beyond. But so far, it hasn’t appeared to happen. Looking at Hispanics overall (the voter file doesn’t list island/nation of origin), the total numbers of Hispanic voters has increased by less than a point since 2016, and Hispanics remain 16 percent of the voter rolls. Meanwhile, whites remain a majority of voters in the state at 64 percent, a number that’s essentially unchanged since 2016. (Where are they coming from? Think pickle ball.) Whites are proportionately leaving the Democratic Party. In 2016, the Democratic Party for the first time became majority nonwhite (51 percent). Now it’s 52 percent nonwhite. The Republican Party is disproportionately white, 83 percent.

To be fair, that seemed like a legit projection, given the unhappiness over the Trump administration’s response to Hurricane Maria. Whether fair or not, that anger should have driven some voter backlash — not to the same extent as George W. Bush experienced after Hurricane Katrina, but one would have expected some boost for Democrats. And yet, Caputo notes, the needle has hardly budged.

One reason might be the rush to embrace socialism by Democratic Party leaders, or at least to pander to it. Puerto Rico has had its economy stunted and its infrastructure declining for many years thanks to its territorial government’s embrace of “democratic socialism.” The hurricane’s impact was so large as to make it impossible to resist significant damage, but the island’s infrastructure was in bad enough shape before the hurricane that it stood no chance of survival anyway. Their own mismanagement of the recovery efforts has likely not gone unnoticed too, plus the pre-existing debt crisis that paralyzed the territory before Maria’s arrival. Those who came to Florida are probably more interested in a fresh start in a free-market system, not a transfer of the failures of San Juan to Florida and beyond.

Whatever the reason, this forces a reconsideration of electoral turnout models on August 28th and in November. That’s certainly not good news for Bill Nelson’s efforts to retain his Senate seat, where he’s already trailing Gov. Rick Scott in most polls. Any recalculation of likely-voter modeling will not bode well for Nelson, nor in the gubernatorial race where likely Republican nominee Ron DeSantis only slightly trails likely Democratic nominee Gwen Graham. On top of that, Florida will be one of the states in which the RNC can be expected to flex its financial and organizational strength, and where the DNC’s deficits in both will become acute.

It’s still more likely than not that Democrats will pick up enough House seats nationwide to get the majority — but these numbers out of Florida suggest it’s going to be tougher than anyone thought.