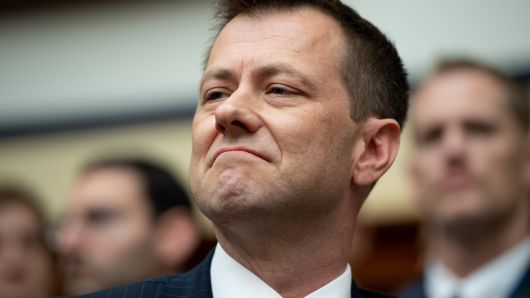 The Washington Post reports that the FBI has fired Peter Strzok, the anti-Trump man who assured his FBI girlfriend that “we’ll stop” Trump from being president. The FBI’s inspector general concluded that Strzok showed a “willingness to take official action” to hurt Trump’s electoral prospects. Though the inspector general went no further, there is reason to believe that Strzok acted on this “willingness.”

Strzok was escorted out of the FBI building in June and effectively relieved of work responsibilities, though he remained an FBI employee. According to Strzok’s attorney, the head of the FBI’s office of professional responsibility decided that Strzok should be demoted and suspended for 60 days. This decision, he says, was overruled by FBI Deputy Director David Bowdich, who ordered the firing on Friday.

Bowdich has been with the FBI since 1995, when he began his career with the Bureau as a SWAT team member and sniper. Before that, he was a police officer in New Mexico. Before coming to Washington as Deputy Director, Bowdich ran the FBI’s Los Angeles office.

Thus, Bowdich is a career FBI man, not a political appointee. He has no connections with President Trump.

Bowdich once said that “The Untouchables” is his favorite cops and robbers movie, and that “Eliot Ness’ character was unyielding, tenacious, principled.” (Emphasis added). No wonder Bowdich was unwilling to retain the unprincipled Strzok.

Strzok’s lawyer complains that Bowdich’s intervention is contrary to FBI assurances that Strzok would be afforded the normal disciplinary process. He says “this isn’t the normal process in any way more than name.”

If the FBI violated proper procedure in firing Strzok, which I doubt, he can challenge his discharge on that basis. But firing Strzok rids the FBI of a man who was willing to put his finger on the scales of justice for partisan political purposes. It sends a clear message to other employees who might be inclined to do so, and it may help restore faith in the FBI as a straight shooting law enforcement agency.