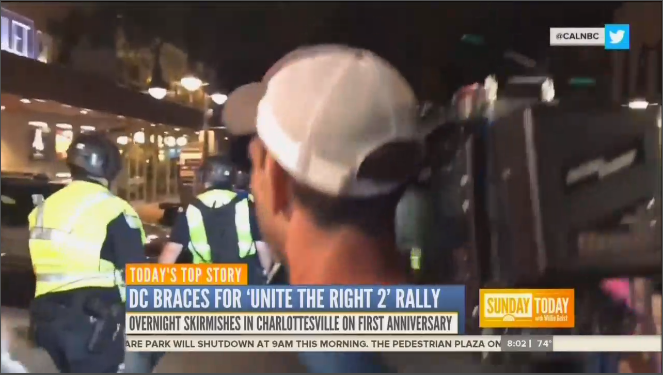 On the one-year anniversary of the deadly Charlottesville protests, white supremacists and radical leftists known as Antifa descended on the Virginia town once more to commit more violence. Late Saturday night, NBC News reporter Cal Perry and his crew were in the thick of it as Antifa members ganged up on them and attacked. The next morning, NBC’s Sunday Today ignored the attack and suggested the media was simply “heckled” by their assaulters.

On Twitter, Perry was documenting the protesters as they marched through the streets of college town when they started to get “very aggressive with the media” and trying to block their camera shots. “Yeah. We’re getting a lot of this. Protesters trying to grab our camera,” he responded to one Twitter commenter telling him to “f**k off national media vulture.”

Things got super-heated when one Antifa protestor shouted “F**k you, snitch a** news b**ch. F**k you” and tried to either pull the camera away from the person using it or knock it to the ground. It was unclear in the video.

Despite the video evidence on the ground from their own reporter, NBC went to Garrett Haake, who was at the White House in anticipation of violence there as another white supremacist rally was set to be held. “Overnight, tense moments in the streets of Charlottesville, Virginia, far left protesters heckling the media and chanting anti-police slogans,” he suggested at the top of his report. They actually used footage Perry and his crew shot but didn't show anything from their attack.

The assault on NBC’s reporter came almost a year since their political director, Chuck Todd used his MSNBC program, MTP Daily to elevate Antifa’s violence as a legitimate tactic against the right. He even doubled down and allowed them to use the formerly prestigious Meet the Press as a platform to push their hate and violent methods. Todd has never condemned them.

Todd appeared on Sunday Today and had nothing to say about the attack or Antifa, which had been declared a domestic terrorism group by the State of New Jersey before he had them on last year. Instead of condemning Antifa, he lambasted the President for criticizing anthem protesters and targeted his supporters as racists.

“So I don't think, if the President is, quote, ‘learned anything’ I think in his mind, he has seen this is an effective political strategy to keep his base, his base,” he declared about what the President had learned since last year’s violence. “That it is the president's continuation of using to be generous, dog whistles, others say they're not silent. You can hear the whistles pretty loudly.”

It’s sad and disturbing that NBC would choose to ignore violent leftists assaulting their own employees in exchange for railing against President Trump’s voters, but this appears to be the world we live in now. The assault also came after the entire liberal media had been trying to convince the public that Trump supporters where violent ones reporters had to watch out for.

WILLIE GEIST: Let's begin this morning with the one-year anniversary of the deadly white supremacist protest in Charlottesville and the death of Heather Haier. Demonstrations in Charlottesville during the day on Saturday were peaceful but got out offhand last night as leftist Antifa protestors lashed out at the media and police. Today a large rally is planned in Washington, D.C., with a big police presence to meet them. NBC’s Garrett Haake is there for us. Garrett good morning.

GARRETT HAAKE: Hey, good morning Willie. D.C. Police will be flooding this area later today trying to keep separate groups of white nationalists and counter-protesters, even as they converge on this small park later tonight.

Overnight, tense moments in the streets of Charlottesville, Virginia, far left protesters heckling the media and chanting anti-police slogans. As the city rolled out a heavy police presence on the eve of its darkest day.

HAAKE: On a working vacation in New Jersey, President Trump will watch the rally on television, not from a White House window. On Saturday, Mr. Trump tweeting to preemptively “condemn all racism in violence”. A stark contrast to his response to last year’s chaos in Charlottesville.

GEIST: Another extraordinary day in the presidency of Donald Trump right across the street from where he works. He’s not there today but will be this demonstration from white nationalists and probably counter-protesters as well. It comes one year after Charlottesville when the President said, of course, there were very fine people on both sides, seeming to put equivalency between the left and the racist right. Where are we a year later? I know you’re going to tackle some of this on the show. What has the President learned 12 months on?

So I don't think, if the President is, quote, "learned anything" I think in his mind, he has seen this is an effective political strategy to keep his base, his base. But I could tell you pretty much every other Republican who has to be on a ballot in 2018 believes that this is at the core of the Republican party suburban voter problem, right? That it is the president's continuation of using to be generous, dog whistles, others say they're not silent. You can hear the whistles pretty loudly. But that is sort of why the Republican Party is in this bind in 2018, where you have a slice of the party, the suburban voters, who are just uncomfortable with the Trump brand of Republicanism.