Throwing Children Away: The School-to-Prison Pipeline

Editor’s note: This is the fifth in a collaborative series with the R Street Institute exploring conservative approaches to criminal justice reform.

Imagine receiving a phone call that your child had misbehaved at school. Imagine if that call came from the local police.

Tens of thousands of parents go through this scenario every year. And while it’s natural to assume the police will only get involved if a serious offense is committed, the majority of these cases—and arrests of juveniles at school—involve bad behavior, not criminal activity.

Why is behavior that used to be disciplined within the school system now being outsourced to the police? There are a number of factors, but the most notable is the increase in the number of police officers stationed on school campuses, i.e. school resource officers (SRO).

This concept was indirectly referenced by Paul Butler, a former federal prosecutor, in his book Chokehold. He noted that arrests in New York City are typically at their highest levels on Wednesdays. The reason has nothing to do with the number of crimes committed. Wednesdays are when the NYPD is staffed at its highest levels.

With that in mind, roughly 30 percent of public schools now have SROs on campus. It’s a trend that started in the late 1990s as part of a “zero tolerance” policy for school safety. With about 20 years of data to review, most academic studies have found that this movement has been counterproductive.

In his study “School Resource Officers and the Criminalization of Student Behavior,” University of Tennessee sociology professor Matthew Theriot found that students in schools with SROs were nearly five times more likely to be arrested for disorderly conduct, which, as mentioned earlier, can encompass a wide range of non-criminal behavior.

That includes even speaking out when a SRO commits violence. You may remember this awful video of a student who refused to leave class. An officer flipped her desk while she was sitting at it and slammed her onto the ground. He then threw her across the floor. 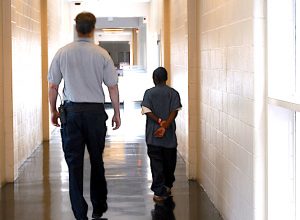 This was clearly excessive force and one of her classmates, Niya Kenny, spoke up: “Isn’t anyone going to help her? Y’all cannot do this!” Niya Kenny was then arrested by the same officer for disorderly conduct. (The officer was fired by the school, but he was never charged with a crime.)

There’s also a racial component here. Last year, Education Week published the most extensive statistical analysis of the school-to-prison pipeline to date and found that nearly 70,000 students were arrested during the 2013-2014 school year, and that black students were disproportionately taken into custody in 43 states and the District of Columbia. Again, the main variable is the presence of SROs. Black students are statistically more likely to attend a school with an SRO on campus.

After being arrested, minorities are thrown into what is supposed to be a colorblind criminal justice system. However, there are stunning levels of systemic bias at every step of the process. Black juveniles are six times more likely to be sentenced to jail than white youths convicted of similar offenses. Black juveniles are also more likely to be tried as adults and to serve longer sentences.

This is a nationwide issue, but one particular example has caught the attention of the Department of Justice. In 2012, the DOJ accused the city of Meridian, Mississippi, of operating a “school-to-prison pipeline.”

It was an accurate description. The Meridian Police Department had a standard policy that all students faced arrest if they were referred to the police by the school. There was no room for discretion, no matter how petty the offense. Because the issue of probable cause wasn’t addressed, this was a violation of the Fourth Amendment.

Alarmingly, 67 percent of youths in the local detention center were sent from the school system. Even after leaving jail, the cycle continued for many because every minor act of misbehavior at school was a potential probation violation.

The DOJ discovered further constitutional violations. Children were routinely detained for more than 48 hours without receiving a probable cause hearing, a violation of federal constitutional requirements. Also, children were often interrogated without being informed of their Miranda rights.

The DOJ eventually reached a settlement agreement with Meridian in 2015. The city agreed to no longer commit any violations and not to initiate arrests for offenses that should be handled only by the school.

Nonetheless, the situation in Meridian prompted the DOJ to launch a separate investigation into the Walnut Grove Youth Correctional Facility. It’s the largest juvenile detention center in the country and is located 60 miles south of the city.

The DOJ’s investigation came to some alarming conclusions. The conditions within the facility were so violent that the correctional officers often forced inmates to fight for their entertainment. Many of the officers had gang affiliations and knowingly allowed certain inmates to possess deadly weapons. Female staff members had sex with male inmates at a nearly unprecedented rate.

Obviously for an adolescent or teenager, living through such an experience is incredibly traumatic. Understandably this causes some youth to dive deeper into the criminal culture in order to survive survive it. Suffice it to say, the correctional system frequently fails to achieve its rehabilitative goals.

And for those who try to walk the straight and narrow path, it’s a serious challenge. Arrest data certainly demonstrates that juveniles who are exposed to the criminal justice system are more likely to drop out of high school and less likely to attend college.

That’s not an entirely causal relationship, but there are a number of relevant factors at work, such as the stigma that comes with a criminal record. School officials are less likely to offer leniency to students with such a background. More importantly, criminal history questions are part of the application process in 60 to 80 percent of private colleges and 55 percent of public colleges. Also, financial aid is limited for those with a criminal record.

It’s easy to see how destructive this school-to-prison pipeline can be to an individual’s development. What’s less known is that it can also lead to parents being sent to prison. The Associated Press reported in 2014 about a 55-year-old mother of seven in Reading, Pennsylvania, who had died in jail. She was serving a two-day sentence to eliminate $2,000 in fines stemming from her sons’ truancy from school.

Her situation wasn’t all that uncommon. Of the 1,600 people who had been jail since 2000 in her county (Berks), two thirds of them were women serving time related to their children’s truancy fines. Truancy isn’t as aggressively enforced nationwide, but there are some cities that stand out. Parents in Jacksonville, Florida, with a child who has more than five unexcused absences in a month can face up to 60 days in jail.

Clearly, something has to be done to address the school-to-prison pipeline. Unfortunately, the increasing number of mass shootings in schools is likely to stand in the way of progress.

In response to these shootings, most people have naturally demanded more police officers stationed on school campuses. But such a policy comes at a cost, i.e., more children who will be arrested for non-criminal offenses and dumped into the school-to-prison pipeline.

We’d be wise to heed the advice of the experts who have studied this issue at length. The Justice Policy Institute published a report, “Education Under Arrest,” which made it clear that the presence of a school resource officers (SRO) was counterproductive and there was no correlation with school safety.

Likewise, Steven Teske, the chief judge at the Clayton County Juvenile Court in Georgia, was asked to testify before Congress. He personally observed the damaging effect of zero-tolerance policies.

Teske helped to implement an already existent program known as the Juvenile Detention Alternatives Initiative. In short, he coordinated with police and school officials to eliminate criminal charges for various minor offenses and develop alternatives to traditional disciplinary actions.

The results speak for themselves. Arrests at the schools there decreased by 67 percent along with a 73 percent decrease in the number of weapons on campus. Consequently, the school system’s graduation rate increased.

The program has a proven track record in a number of other cities too. The only question is whether more schools will take notice of this underreported issue and get on board.

Brian Saady is the author of four books, including his series, Rackets, which chronicles the legalization of drugs and gambling, and the decriminalization of prostitution. You can check out his podcast and follow him on Facebook and Twitter.