Arsonists dressed in black torch dozens of cars in Sweden 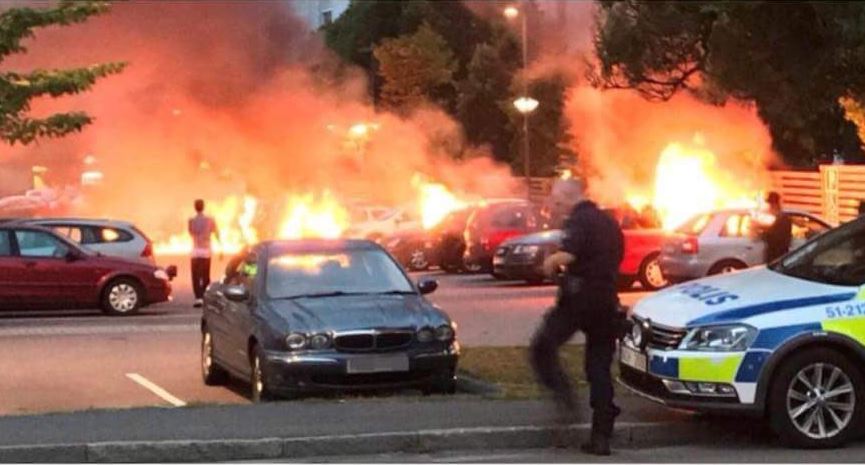 There’s not a lot of solid information yet, at least not in English, but there are several video clips showing groups of people dressed in all black setting fire to dozens of parked cars in Gothenburg, Sweden. In this clip you can see the people sneaking around the parking lot setting fires:

And in this subsequent clip, you see the cars burning a short time later. You can see it’s the same neighborhood just a little later in the evening:

Another clip appears to show a closer view of the arsonists at work.

Finally, this next video may be from the same area. It shows at least six and maybe more figures in black running away from the scene as night falls:

Again, there’s not much detail about what happened here (at least not in English), but the Daily Mail has an early report:

Police said they were dealing with fires at a car park near a shopping centre and specialist hospital at Frölunda Torg, south-west of Gothenburg.

There were also reports of young people setting cars on fire in Hjällbo in the north of Gothenburg and further reports of fires in Trollhättan, although it was not clear if these were related…

Around 60 vehicles had been vandalised in total, Swedish television reported, with stones also thrown at police by masked men. Three caravans and a truck have also apparently been targeted.

Here’s a Swedish site which reports there were attacks at multiple sites which police believe may have been coordinated on social media, though they still don’t know why. Note that this is using Google translate so it’s not perfect but you can get the gist:

At 21 o’clock on monday night there was a warning that cars, mopeds, car tires and pallets began to burn around Gothenburg, but also in Trollhättan and Lysekil…

In all cases, witnesses have observed young people who ignited fire on the cars, and then quickly removed from the site…

The police suspect that the fires were coordinated.

“We can not rule out the existence of a relationship,” said Ulla Brehm, presidential spokesman at the West Western police.

The police believe that coordination may have been through social media, but they still have no theory of what might be behind the attacks.

Trollhättan is about an hour north of Gothenburg so these coordinated attacks are pretty spread out. At this point, no one knows who is responsible or why. Maybe tomorrow we’ll get some answers about who was behind this and what motivated them. If there are any breaks in the case tonight I’ll update this post.