Ellison accuser refuses to release video as another allegation emerges 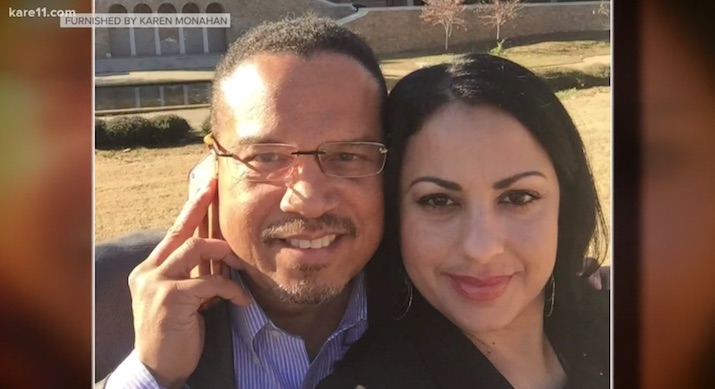 The curious case of Rep. Keith Ellison got even more curious in the hours leading to Primary Day here in Minnesota. The woman who now accuses the deputy DNC chair says she will not release the video that her son described in his Facebook post this weekend as proof of the Democratic Congressman’s abuse of his mother. But also, as KARE 11 reports, the Ellison campaign also admits that he met with Monahan two months ago before filing for his run as state Attorney General and was warned that the video existed:

Monahan didn’t return text messages from KARE reporters on Monday. She told Minnesota Public Radio that she won’t release the video clip described by her son on Facebook.

She continued to post on Twitter and Facebook Monday and issued screen grabs of text messages from Ellison to bolster her assertion that he has contacted her since their breakup in 2016.

The Ellison campaign confirmed the two have met several times since they ended their relationship.In fact. the campaign said the two met June 5, the night before Ellison filed to run for attorney general.

The campaign said that meeting was requested by Monahan, who was seeking Ellison’s assistance on an unrelated matter. But, according to the campaign, Monahan did bring up the alleged video clip at that June 5 meeting.

Why bring up the video as proof and not release it? That seems to present a credibility problem for Monahan, who instead was releasing text messages to prove that there was bad blood between the two after the end of the relationship. But it’s also a credibility problem for Ellison too, who initially denied knowing anything about a video. Now it turns out that he was aware of the potential existence of the video for more than two months before his denial yesterday.

Meanwhile, another allegation of potential domestic abuse involving Ellison emerged yesterday. This appears to be pulled from police records a decade before the alleged assault took place on Monahan, and it comes from a suburban Minneapolis councilman:

The caller's name has been redacted in the report, but according to records searches Amy Alexander, who spoke out in 2006 about her relationship with Ellison, lived at this address in 2005.

This account seems a bit sketchier; it’s based in part on an article written by the alleged victim in a newspaper that went defunct years ago. John Hinderaker has more on it at Power Line, calling it “explosive” if true. Both John and Vox link to an archived version of Alexander’s interview, which contains this allegation of violence:

In May, Keith wanted to try and quiet me so he came to my home uninvited. We had words. His anger kicked in. He berated me. He grabbed me and pushed me out of the way. I was terrified.I called the police. As he fled he broke my screen door. I have never been so scared. I immediately began to second guess myself as many victims of abuse do when at the brink of exposing their abuser. How could I or anyone stand up to the man who had been the local icon of black militancy for almost two decades?

That’s what apparently prompted the 911 call, if the records are accurate. Unlike the Monahan case, this one ended up before a judge. Ellison denied the allegations and demanded a restraining order on Alexander, and she asked for one against Ellison, about which she speaks in the article. The judge ended up denying Alexander’s request and approving Ellison’s. Why? We don’t know, and it appears that Alexander has been quiet about Ellison since. But the 911 record corroborates at least part of Alexander’s later claim of domestic violence.

That’s about where this will stand for today, as Minnesota voters go to the polls. Will it change their minds? As my friend Steven Scheier told KARE 11, it won’t matter for at least 100,000 of them:

Schier pointed out that more than 100,000 people have already voted via early absentee voting, so it’s difficult to predict the effect of Monahan’s accusation against Ellison.

“One of the key differences from the Franken situation to the Ellison situation is there was a photograph, undoctored photograph of Al Franken doing inappropriate things to a sleeping woman. And in this case the video hasn’t been produced yet.”

No it hasn’t, but it’s likely that Ellison will skate by the primary anyway, thanks to the lateness of the emergence of this issue. Will it come out in time for the general election, and will the media cover it if it does?