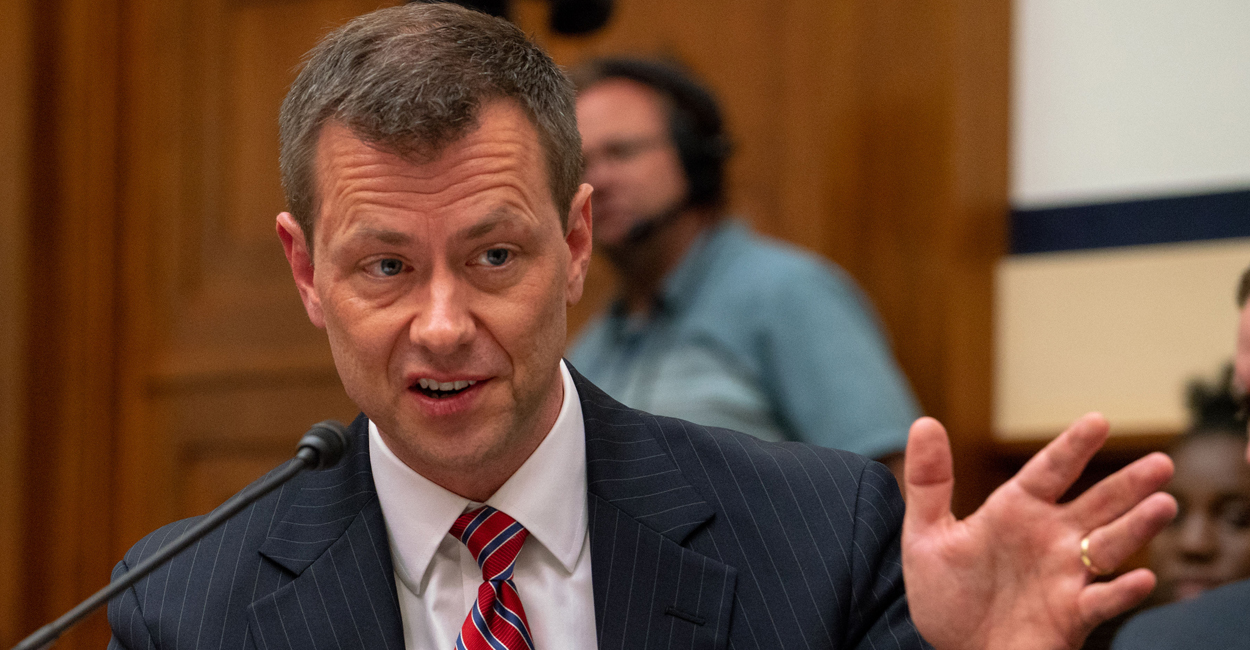 The FBI has fired Peter Strzok, the agent who in 2016 texted he would “stop” Donald Trump from becoming president and has since been under a cloud of suspicion of political bias in doing his job.

The Washington Post first reported Monday on the firing of Strzok, who last month found himself on the hot seat at a House committee hearing, where he tried to explain the anti-Trump text messages.

Strzok played a key role in the FBI’s probe of 2016 Democratic presidential candidate Hillary Clinton’s private email server and later the investigation of Russian meddling into the 2016 presidential campaign and possible collusion between the Trump campaign and Russians.

The FBI office that handles discipline had decided Strzok should only be demoted and be suspended for 60 days.

Goelman said the move undercuts the FBI’s repeated assurances that Strzok would be afforded the normal disciplinary process. The former deputy assistant director for counterintelligence was initially demoted to a human resources job before he was suspended in June.

“This isn’t the normal process in any way more than name,” Goelman complained, according to the Post.

Strzok, an FBI veteran for two dozen years, was largely undone by a series of anti-Trump text messages he exchanged with FBI lawyer Lisa Page on their official government phones.

Justice Department Inspector General Michael Horowitz, in a report in June on the FBI’s investigation of the Clinton email server, concluded Strzok showed a “willingness to take official action” through his job with the FBI to hurt Trump politically during the 2016 election.

In possibly the most damning text exchange revealed by the inspector general report, Page wrote Aug. 8, 2016, “[Trump’s] not ever going to become president, right? Right?!”

It’s likely more information will come out about Strzok beyond the messages disclosed by the inspector general report. In May, U.S. District Court Judge Reggie B. Walton ordered the FBI to begin processing 13,000 pages of previously undisclosed emails exchanged exclusively between Strzok and Page between Feb. 1, 2015, and December 2017 in a Freedom of Information Act case brought by Judicial Watch, a conservative government watchdog group.

“The firing of Peter Strzok is another body blow to the credibility of the Mueller special counsel operation. Strzok, who hated President Trump, compromised both the Clinton and Trump investigations that saw Hillary Clinton protected and Donald Trump illicitly targeted,” Tom Fitton, president of Judicial Watch, said in a public statement.

“Strzok’s anti-Trump texts show the Russia investigation he helped invent with Clinton campaign operatives is irredeemably compromised. As Mueller’s operation is founded on Strzok’s corrupt activities, it must be shut down,” Fitton said.

Emails already obtained by Judicial Watch through the FOIA request show that Strzok insisted on keeping his security clearance upon joining the Mueller probe.

On Saturday, Trump referenced Strzok in a tweet as “Peter S.”

… Will the FBI ever recover it’s once stellar reputation, so badly damaged by Comey, McCabe, Peter S and his lover, the lovely Lisa Page, and other top officials now dismissed or fired? So many of the great men and women of the FBI have been hurt by these clowns and losers!

Referring to Strzok and Page, the June inspector general report said that “the conduct by these employees cast a cloud over the entire FBI investigation.”

During his testimony before a joint hearing of the House Judiciary Committee and House Oversight and Government Reform Committee in July, Strzok denied bias.

“At times, my criticism was blunt, but despite how it’s been characterized, it was not limited to one person or to one party. I criticized various countries and politicians, including Clinton, Sen. [Bernie] Sanders, then-candidate Trump, and others,” Strzok told the committee members.

He later said in the hearing that it wouldn’t likely be possible to bias an investigation.

“At every step, at every investigative decision, there were multiple layers of people above me—assistant director, deputy director of the FBI—and multiple layers of people below me—section chiefs, unit chiefs, and analysts—all of whom were involved in all of these decisions,” Strzok said. “They would not tolerate any improper behavior in me any more than I would tolerate it in them.

“The suggestion that I, in some dark chamber in the FBI, would somehow cast aside all of these procedures, all of these safeguards, and do this is astounding to me,” he added. “It couldn’t happen.”