Inevitable: Trump aides wonder who else is secretly making recordings 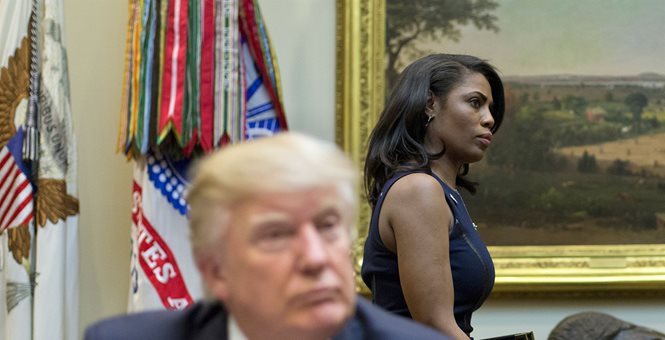 Imagine this workplace. You’ve just found out that the president’s reality-show buddy, who had the full run of the West Wing, was making recordings on the sly. And not just of small-fry deputies: The two tapes she’s revealed so far are of the chief of staff and the president himself. You also know that the president’s now-estranged former lawyer, Michael Cohen, made recordings of him and others over the years, leading you to wonder how widespread this practice might be in TrumpWorld. Is it just Omarosa and Cohen? Is it Ivanka and Jared too? Is it Kellyanne? What might Hope Hicks have on her smart phone?

Then you remember that the president himself is rumored to have taped visitors to his office while a businessman in New York. He famously claimed to have tapes of his chats with James Comey in the Oval Office. Surreptitious recordings seem almost to be an evolutionary strategy in Trump’s orbit, a practice developed as a matter of natural selection. When you’re in an environment that’s secretive, media-crazed, and teeming with power-jockeying backbiters willing to lie to gain an advantage, recording everything that’s said to you is a logical defense mechanism, like talons. Or an offensive mechanism, of course. Everyone in the West Wing has one eye on the exit and another on a payday, and nothing will goose book sales like recordings of Trump and others saying things privately that might cause a ruckus if the public found out.

The release of two privately recorded conversations by former Trump loyalist Omarosa Manigault Newman has shaken Trump world, which has grown increasingly paranoid about other potential recordings Manigault Newman — and others — could drop…

A former White House official told BuzzFeed News that Trump allies are “more worried about self-preservation than national security” because many were frequently too candid in meetings. Many are now thinking back about what they said that could be problematic and who was around them when they said it.

Some are also already pointing fingers at others who might have made their own tapes. BuzzFeed News heard at least three different names of Trump allies floated as those who might also have tapes, but could not confirm the veracity of those claims.

“Several senior aides said Monday that they doubted Manigault Newman was the only person taping her conversations at work,” CNN confirmed, underlining “an underlying suspicion that everyone inside the West Wing is out for themselves.” How does one function in that climate? How do you give candid advice to your colleagues or even to the president knowing that it might be taped and used to humiliate (or blackmail?) you down the line? The two legal privileges with which Americans are most familiar, attorney-client and spousal, each reflect the idea that some relationships are so important that the law will shield what’s said between the participants so that they can feel completely comfortable speaking candidly to each other. The law wants you to be able to be honest with your spouse and lawyer, even to the point of excluding evidence offered in open court. Ask yourself: How important are the relationships inside the West Wing, the most powerful office space on earth? And now observe that thanks to Omarosa, Cohen, and even Trump himself, total honesty is impossible there. You give your candid opinion to someone and it might be on the Today show tomorrow morning.

NDAs are one way to encourage that honesty — what you say here stays here, or else — but not if they’re probably unenforceable. The Daily Mail followed up on Trump’s tweet of this afternoon and has news on that point, though. It’s not the White House or even Trump himself that’s a party to Omarosa’s NDA, it’s Trump’s campaign. How does that affect its enforceability?

President Donald Trump’s re-election campaign organization is considering filing a breach of contract lawsuit against Omarosa Manigault-Newman, responding to what a campaign official says are ‘ongoing’ violations of a non-disclosure agreement the former White House aide signed in 2016.

The official, who requested anonymity in order to speak freely, told DailyMail.com that other campaign aides who are mentioned in Manigault-Newman’s memoir, on sale Tuesday, also have initiated discussions with the campaign about filing defamation lawsuits of their own.

The non-disclosure agreement, the official added, specifically prohibited her from publicly disparaging Donald Trump at any time after she signed it, and ‘she’s violating it right now.’

It has to be that an NDA between Omarosa and a private entity like the campaign is more likely to be enforced than one between her and the White House or the president, but how much more likely? If an NDA between her and the White House would be unenforceable because it’s in the public’s interest to have former government employees feel free to speak candidly about their service, why does the calculus change just because it’s the president’s campaign arm that filed the complaint? I wonder if a court would compromise by enforcing the NDA with respect to Omarosa’s interactions with Trump before he was sworn in but not her interactions with him afterward.

Really, though, this is academic. The usual deterrent to filing suit applies here — namely, discovery. Between the likelihood of losing the suit, the pitfalls of the discovery process, and the real risk that Omarosa has other, more damaging tapes that she might be inclined to spill if Trump or his attendants come after her, they’re not going to sue. If nothing else, the Stormy matter has (probably?) taught TrumpWorld the lesson that suing to enforce an NDA is more trouble than it’s worth by amplifying the target’s media megaphone. And if they sue Omarosa and lose, as they probably would, they risk a dam break among other staffers who might have held their tongues so far. The reason Trump likely wanted NDAs for White House staffers in the first place, even doubtless after being told that they’re probably unenforceable, is that they might have frightened staffers into observing the terms. Sure, the NDA might not hold up in court … but what if it did? And how much would they spend in legal fees to find out? Losing a lawsuit to Omarosa would weaken that intimidation factor.